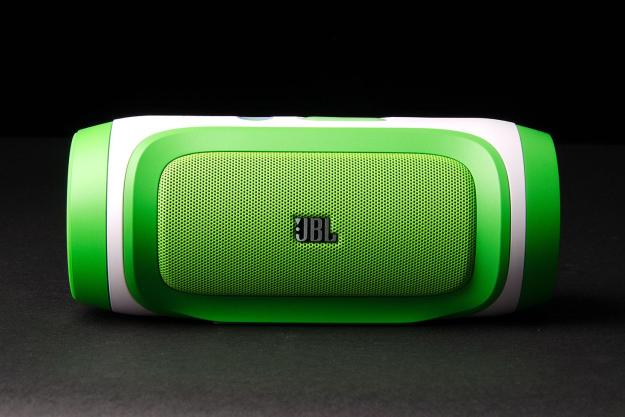 “What the Charge lacks in features, it makes up for in sheer audio performance.”

The last time we checked out a portable speaker from JBL, the $100 Flip, we were pretty much blown away by the small speaker’s big-league blast of sound. The Flip easily filled our test room with its concise, detailed sound signature, and its exterior design was a refreshing break from the ritual rectangles we’ve grown accustomed to. The only real issue we had with the speaker was its mediocre 6-hour rechargeable battery life.

Now JBL is back with the Charge, an unofficial refresh of the Flip. At $150, the Charge is a bigger investment, but it also offers better battery life and a more durable plastic shell, making it a friendlier option for the great outdoors. Still, it’s been months since the Flip first captured our ears, and in Bluetooth years that’s like a decade. Can JBL’s newest model stand up to the current crop of portable competitors? To find out, we fired the Charge up and hit the road.

Unlike a lot of the portable speakers we test, the Charge comes in a solid cardboard box, classy enough to stay out of the recycling bin and act as the speaker’s off-duty resting place.

Opening the magnetically sealed front flap gave us our first glimpse of the capsule, which layers lime-green accents around a white core. The speaker felt remarkably solid as we removed it from its box, and a knock on the exterior revealed rock-hard armor and robust metal speaker screens. Inside the box we also found a neoprene carrying case, a mini-USB cable with DC adapter, and a packet of instructions.

The Charge’s rugged design follows the encouraging trend of durability in the current generation of portable Bluetooth speakers, allowing consumers to play precariously with their sonic toys. The vivid color pattern and rough-and-tumble plastic coating give the speaker a sporty aesthetic, and while the Charge makes no claims of water-resistance like a lot of speakers we’ve seen recently, its exterior feels solid enough to chuck it against the wall or drop it from a good height without disastrous repercussions. In addition to the green scheme our review unit came with, the speaker is also available with black or neon-blue accents.

Dual strips of rubber padding at the speaker’s base keep it steady when oriented lengthwise and flat rims at the sides allow it to rest vertically as well, providing a more convenient, linear path for the sound. A metal speaker screen is nestled inside the right flank, revealing the speaker’s bass port. At the opposing end, a flap covers a USB port which allows you to charge smartphones or other devices, hence the speaker’s not-so-imaginative title. It’s a nice feature, but nothing new, and aside from an extended battery, the Charge is relatively light on options. An Aux input, and a triple LED battery indicator round-out the feature set. A speakerphone feature is conspicuously absent here, though it’s standard on most of the Bluetooth speakers we test, including the Flip.

At the top (or side) of the capsule is a dual-button control set, consisting of a power/pairing button and a volume toggle button. Under the perforated front speaker screen is a pair of 1.5-inch drivers, nearly the exact size and (presumably) design as the drivers we enjoyed in the Flip. Like the Flip, the drivers are powered by a 2 x 5 watt amplifier, with a frequency range of 150Hz-20 kHz. A thick plastic plate resides at the opposing side of the main speaker screen, seeming to exist only for symmetry.

What the Charge lacks in features, it makes up for in sheer audio performance. To put it bluntly, this little cylinder is badass. Though it’s not without its flaws, the Charge provides rich definition, as well as some of the brawniest velocity in its class, blasting us out of the room at full volume, and easily cutting through outdoor ambience. The speaker’s bright and punchy upper register walks a tremulous tightrope between brilliance and sibilance, emerging as the victor for the vast majority of musical genres to produce potent detail, and fluid clarity.

We started our listening with a little Jackson 5, cueing up “Dancing Machine”. Right from the start, the Charge showed its mettle. The funky wah-guitars and keys were spread cleanly through the sound field, and the vocal harmonies spun forth with a sweet balance, providing a lyrical glow that allowed young Mikey to do his thing with pizazz.

Putting our iPhone 5 on random, we cruised through our catalog, soaking in the Charge’s deft reproduction of woody acoustic instruments, and thick, sparkling snares and cymbals. Though at times vocals tended to get a little bite-y and sibilant at the attack, mostly we were treated to rich, articulate leads and an impressive level of dimension in background voices for such a small device.

One of our most memorable experiences came during Pink Floyd’s “Money”. Listening to the track in the background, we were forced to drop our Internet wandering and give the speaker our full attention as it reproduced an impressive level of definition in the sax solo. We could hear the creaks of breath and reedy vibrations of the horn, bringing a live presence to the track that is a rare treat from a portable speaker of this size. As Gilmour came in for his turn at the helm, the guitar bore a crinkled crunch at the attack, with a clean sustain that brought a smile to our face.

The Charge is not without its weak points, of course, especially in the lower register. Things got a little muddled with distortion downstairs in more heated tracks, and the speaker seemed to drop off like an ocean trench around the 200Hz line, though that’s nothing out of step with most of portables we test. We also could have used some more warmth in the lower mids, especially during Beatles tracks, which never provided the buttery caramel in the bass and guitar that make the tunes so, well, Beatle-y. Other than those small critiques, the Charge stands as a great example of a speaker that puts out sound far beyond its diminutive dimensions.

With its unflappable exterior shell, sporty design, and vigorous display of power and definition, JBL’s Charge is a worthy successor to the Flip. The speaker is light on features, but when it comes right down to it, sound is the great equalizer, and the Charge provides all you need to enjoy your music wherever you are. If you’re looking to get into the portable Bluetooth game, or step up to something more rugged and powerful, the Charge is a great option.