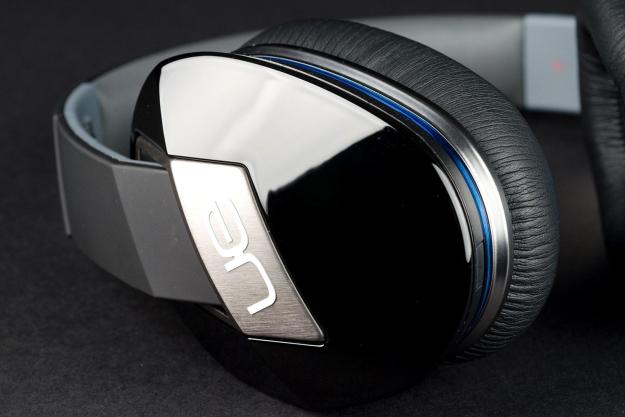 “Logitech’s UE 6000 may not be dynamic or aesthetic standouts, but they don’t have to be when the sound matters most.”

Logitech has been in the home audio business for a long time, though much of that has been centered on computers, and more recently, mobile devices. The acquisition of Ultimate Ears five years ago was likely a move in that direction, now that Logitech sees how hot the headphone market currently is.

The UE 6000 headphones are an over-ear design that crosses between classic gaming headphones and the slick curves and color schemes manufacturers keep pushing onto retailers. But beauty is definitely only skin deep for a pair of cans, and the only reason consumers would strongly consider these over other popular brands is purely for performance.

The $200 price tag already puts these in the same category as a number of headphones from the rapper-inspired lot, and all the way to established brands and even upstart makers looking for a piece of the action. It was in that context that we wondered if these would surprise us, particularly in Logitech’s transition from gaming to music-centric consumers looking for great sound.

Taking a page out of competitors’ playbooks, the box’s top opens up like an accordion-style clamshell. Inside, the manual and documentation rests in a pouch underneath the top flap, while the headphones are nestled in their carrying case, which is square-shaped to accommodate the UE 6000’s form factor when folded up. Within the case is a pouch meant for the blue cable and audio splitter that also come with the headphones. Inside the headphones are two AAA batteries for the noise-cancelling feature that we’ll get to a bit further down.

There’s not much more to the arrangement within the box, though kudos to Logitech for being able to add some elegance to what is an otherwise simple unboxing process.

Logitech likely lost some potential customers with the plastic-heavy design here, but it’s not like competitors in this category have deviated from that themselves. The headband is made of matte, slightly rubberized plastic that feels durable, yet flexible enough to not be rigid. The earcups have a piano-black finish on the outside that tends to be a magnet for fingerprints.

An oddity we found with the cable was on the straight end that plugs into the right earcup.

It gets better further in, where nice faux leather cushions were used to add a solid level of comfort and noise isolation. Blue felt was used for the exposed interior below the cushions, adding an accent to the color scheme of the UE 6000s. The right cup has the noise cancellation button right behind the headband, which is fine, though proves to be a bit tough to find with your fingers when you’re actually wearing the headphones. The battery compartment is in the left cup, and as mentioned earlier, there were two AAA batteries installed right out of the box, so we were ready to go.

The removable blue cable is pretty standard, with 3.5mm ends on both sides – one of which is slanted on a right angle to distinguish it as the one that plugs into whichever audio device you’ll be listening to. It includes playback controls (designed for iPhone) and a microphone for hands-free calls. It functions much like others do, with volume controls and a middle button to play, pause and skip tracks. Double-click the button to skip forward a track, triple click to go back.

An oddity we found with the cable was on the straight end that plugs into the right earcup. Most of the time it seems to plug in fine, but in other instances, it offered some resistance. We’re not entirely sure why, and it appears that some units are affected the same way, given the feedback from consumers commenting on retailers’ websites, but we didn’t find this to be a terrible downside.

We were a little taken with the audio splitter, if only for the fact that it allowed us to share music with a friend, regardless of what headphones or earbuds they were using. Of course, it doesn’t hurt that you can take it with you in just about any situation. Traveling on a plane or bus and watching a movie on the same laptop or tablet are two examples that come to mind.

The soft cushioning and wide space of the ear cups help ensure that there’s a good level of comfort around the ears. This adds to some of the noise isolation you get right out of the box, but is even handier when noise cancellation is turned on. Logitech smartly added a solid layer of malleable foam along the bottom of the band for added comfort, but we felt that it didn’t always have the desired effect. After wearing them for longer periods, we felt a slight pinch at the top of our craniums that we didn’t appreciate. Shifting placement helped, and we weren’t overly bothered by it, but it’s still a regular occurrence that we could do without.

Having used Logitech’s gaming headphones before, we knew that the company wasn’t coming out of nowhere into the headphone space, so there was at least some precedent to go on. That said, we also weren’t sure what to expect.

It’s effective enough to do the job, but we were right not to expect the kind of noise cancellation other premier headphone makers are known for.

Based on our first few listens, we were impressed at the stereo separation and attention given to both the lows and the highs. Vocals weren’t stifled by the noticeable bass, nor did the vocals and treble overtake the bass. The beauty of this was that we didn’t have to turn up the volume to hear the effects of the instruments. It was also readily apparent across a range of musical genres, proving that the UE 6000s aren’t a one-trick pony made for bass aficionados.

String and percussion instruments come through well in all respects, which made it easy to enjoy a classic rock tune just as much as a 70s funk or new age track. In cases where there’s no vocalist, the mids take a bit of a dive at the expense of treble and bass, creating something of a dual effect in which a guitar or violin solo will sound great, but a piano might not be as impactful. In the case of smooth jazz tracks that involve a lot of sax, we weren’t sure what to make of the UE 6000s, in the sense that the range of instruments was hard to gauge. There were times when the highs and mids dominated and others when the lows took over — and within the same track, no less. For tracks that weren’t really meant to be heard that way, we considered it a letdown.

Of course, that doesn’t mean it was all downhill from there. The obvious implication, after listening to tons of tracks covering a dozen genres, was that the UE 6000s are better suited to music that has more punch to it. Hip hop, R&B, rock, electronic and pop sounded great, whereas jazz, classical and movie scores weren’t consistent enough to be in the same class.

Having noise cancellation on board, we were curious to see if we could get the same level of performance in those moments where we want the world around us to be as muted as possible. The feature works as advertised, bumping up the EQ enough so that the audio comes through unfettered, but it’s not without its hiccups. Especially noticeable between tracks or when no audio is playing, a permanent hiss seems to permeate throughout. At higher volumes, you may not catch it or even forget about paying attention to it, but it would’ve been nice if it just didn’t exist in the first place.

It’s effective enough to do the job, but we were right not to expect the kind of noise cancellation other premier headphone makers are known for. We still think it’s better bang for the buck than the noise cancelling found in select Beats headphones, or even others that cost $100 more. Plus, the UE 6000s already pack enough power to keep ears engaged, so noise cancellation is really only there to use when necessary.

And we can’t forget the audio splitter. Super handy when we needed it, which was really no more than two instances, but still a lifesaver when it came to watching something on a shared screen. We’ve found a nice spot for it in our travel carry-on bag.

There’s good value here for the price of $200, especially when factoring in everything you get and the impressive audio quality the UE 6000s offer. They may not be dynamic or aesthetic standouts, but they don’t have to be when the sound matters most. We were impressed with the spatial output that allowed the volume to go up with nary a sign of distortion. That tends to be a tricky combination, and not one that always comes across the way it should for $200.

It’s also worth noting that they’ve been out in the market for several months and are still on par with headphones that are coming out now. We like longevity in a product we want to last, and while we wish they stopped hissing and didn’t pinch after a while, we’re still cool with the idea of keeping the UE 6000s on.