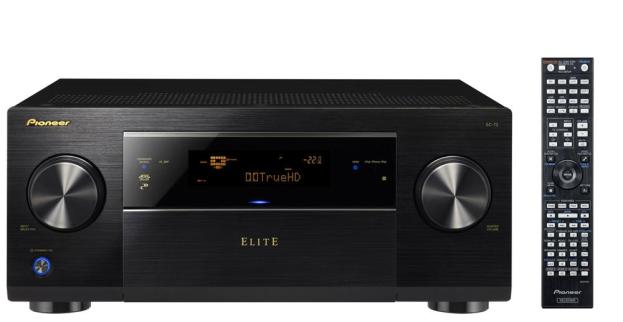 Class D amplification was first offered in a $7,000 Elite receiver Pioneer had released prior, but has now been integrated into these two new models. It’s considered ideal for high-resolution audio because it is meant to be capable of high output without distortion or degradation in performance, including when all channels are driven at full volume. The SC-72 has a slight upgrade with an aluminum panel and insulated dual chassis that is said to reduce noise and improve audio output further.

Both support 4K Ultra HD pass-through for upscaling video signals to 4K resolution, and the feature is good for more than just Blu-ray discs. Both models can also upscale lower-resolution analog video and almost any other video signal coming through HDMI to the higher resolution. For compatible smartphones and tablets, both receivers also have MHL (Mobile High-Definition Link) for playing back audio and video content from those mobile devices or from a Roku streaming stick.

The SC-72 takes this a bit further by adding the ability to adjust tone, volume, balance and the chance to include a subwoofer for a 2.1 setup with a little more low-end punch. Plus, it can handle a fourth zone as a two-channel setup. All of this can be controlled using the company’s iControlAV2013 app for iOS and Android.

Both receivers support multiple audio file formats for playback, including WAV, FLAC, MP3, AAC and WMA streamed from a computer connected to the same Wi-Fi network or a USB drive plugged in. They also now support high-res AIFF and Apple Lossless files, along with Gapless and DSD file music playback. DLNA 1.5 is supported for playback from a compatible device or app. The receivers have built-in Ethernet ports, but not Wi-Fi, so Pioneer’s AS-WL300 adapter would have to be used to add wireless functionality.

Apple users can make use of AirPlay to stream music wirelessly from iOS devices and Macs, while some Android devices can also stream effortlessly, like the HTC One and its HTC Connect streaming feature. Pandora and vTuner are both supported out of the box, though any audio source can be played over a home network connection.