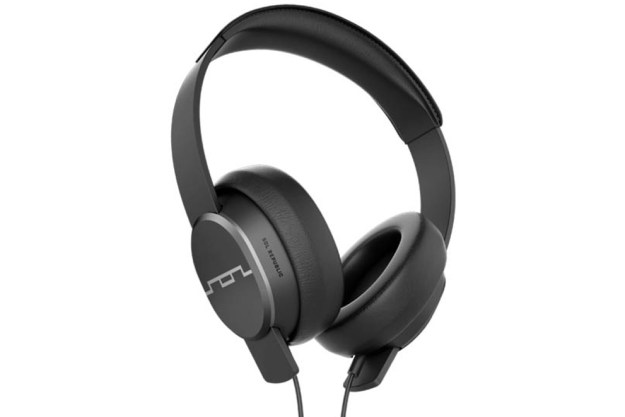 “Those in search of headphones as tough as a pair of overalls but as refined as a tuxedo need look no further than the Sol Republic Master Tracks.”

In an extremely competitive headphone market, Sol Republic, seems to have outlined a winning blueprint. Crafting sleek, minimalist earpieces around the framework of its virtually indestructible polymer headband, the company has achieved some real success with its Tracks, and Tracks HD headsets. The piecemeal design of the relatively affordable lineup allows users to build their own styles from multi-colored, interchangeable parts, rewarding further investment with creative freedom.

With each new model moving slowly up the scale into the upper tier market, Sol Republic has seemed to keep sound at the core of its development, allowing for both substance and style — something that can be a rarity in the rapacious industry. The company has recently taken its boldest step yet in the Tracks line-up, creating an over-ear model for the more refined listener that it calls Master Tracks (available at $200).

Like its predecessors, the Master Tracks offer a pair of removable earpieces, dubbed the “x3 sound engines”, which succinctly connect to a backward compatible headband. And while we’re intrigued by the clever design and durability of the Master Tracks, we were much more interested to hear what happened when we let those “engines” roar. Here’s what we learned after some extensive testing.

The Master Tracks have a distinct aesthetic that is simultaneously elegant and rugged. Apart from our matte grey test model, the headphones are available in an assortment of colors and patterns. The slim headband is dressed with a smooth strip of leather, engraved across the top with the company logo, and supports ample padding underneath. At the base of each arm of the headband is a minute channel indicator for attachment of the corresponding earpiece. The design is ingenious in its simplicity, and the band slips fluidly through the slot of each earpiece, easily adjusting to size without the jerky, corrugated motion of so many headphones we’ve reviewed.

The Master Tracks’ metal earpieces are cut with sleek edges, and sport a subtle, glittered finish. The slot through which the headband is inserted is adorned with slim padding that provides just enough resistance to keep the earpieces firmly in place. The donut shaped earpads are thick and covered in soft leather. The pads attach to the earpieces on an axis, allowing for a small amount of vertical motion to adjust for fit.

Like the headband, the bottom of each earpiece is engraved with a tiny channel indicator next to the cable input, as are the jacks of the dual-pronged cable itself, ensuring all pieces attach correctly. The removable cable is approximately 4 feet in length. The left and right forks are conjoined at the intuitively-designed, 3-button iOS-friendly control microphone, which resides at about one foot from where the cable attached to the headphoens. The cable is terminated on the other end with a 90-degree, gold-plated 3.55mm plug.

This reviewer found the Master Tracks’ ample padding pretty comfortable. Though one of our DT colleagues contends that the headset is one of the most comfortable he’s ever worn, the ear pads occasionally pinched our ears slightly – further proof that one man’s poison is another man’s medicine. Still, we were able to wear the headset for extended periods without much trouble.

We can best describe the Master Tracks’ as having an articulate and powerful sound signature, notable for its full and defined low end, clear midrange, and vast stereo image.

One of the most remarkable and enjoyable features of the Master Tracks’ sound is the immense sense of space they create. Not only did we find sounds to be widely spread across a stereo image, but there was a spherical dimension to the sound that placed the instruments all around us. We were able to pinpoint instrumentation location at multiple angles, both back and forth, and up and down, creating a brilliant listening atmosphere that sucked us right in.

That effect was blatantly obvious in the volley of buoyant synth tones from electronic productions by artists like Depeche Mode, and Radiohead, but it was also striking in simpler rock tracks. In a sampling of the extremely sparse Neil Young tune “For the Turnstiles”, for example, we were amazed by the lucid atmosphere in which the banjo was drawn in the right channel, rendering a vivid aural projection of the studio. Another showy example came in “The Rover”, by Led Zeppelin, in which the right rhythm guitar track was audibly pushed forward and upward, while the left rhythm guitar was closer at hand and more vertically centered in the left side.

Another feature that defined the Master Tracks’ sound for us was the powerful, yet extremely well defined lower register. The drivers made easy work of our favorite hip-hop tracks like “Hypnotize” by B.I.G., and “Money Ain’t A Thing” by Jay-Z, forcing the bass lines through with brazen pressure that was both authoritative and exciting. Though at times we felt the bass got a bit heavy in some of our lighter pop music, for the most part it was well distributed, and never felt muddled or overbearing.

Pressing on through our catalog, we remained impressed by the Master Tracks’ affinity for instrumental separation, creating a smooth balance of everything from Pink Floyd to Ryan Adams. Percussion was often well drawn, revealing deep thumping toms spread all over the vast soundscape, and tight snare and hi-hats. At times we wished for a bit more sparkle at the top end, especially in crash cymbals. We also felt the drivers never carved out the granular texture of the instrumentation as much as we’d like. Still, the Master Tracks created an articulate reproduction of all of the genres we tested. Indeed, throughout our listening, we had little to complain about, simply enjoying the ride.

We think Sol Republic has really got something here. The Master Tracks’ sleek styling, rugged durability, and impressively well-rounded sound signature exceeded our expectations. While the Master Tracks don’t deliver what we’d call “elite” sound, they get closer to that level than you’d expect from a $200 headset and sound far better than most we’ve tested at that price point. Those in search of headphones as tough as a pair of overalls but refined as a tuxedo need look no further than the Sol Republic Master Tracks.

Topics
Apple AirPlay 2: Here’s everything you need to know
How much is Apple Music, and how can you get it for free?
The best Bluetooth speakers for 2022: Marshall, Sonos, JBL, and more
MQair is the new hi-res Bluetooth audio codec for fans of MQA
You can get an Apple TV for $59 for Cyber Monday if you’re quick
Cyber Monday: This Samsung 85-inch TV just got a massive price cut
65-inch Sony OLED TV is $700 off for Cyber Monday, and it’s selling fast
Perfect for a bedroom or kitchen, this 32-inch TV is $108 for Cyber Monday
Get these Sony wireless noise-canceling headphones for $68 today
Walmart has a Bluetooth speaker for $39 in its Cyber Monday deals
Amazon’s superb Echo Studio speaker is just $155 for Cyber Monday
Save $1,000 on this 85-inch Sony Bravia 4K TV for Cyber Monday
Cyber Monday Deal: Samsung’s Freestyle Portable Projector is $300 off