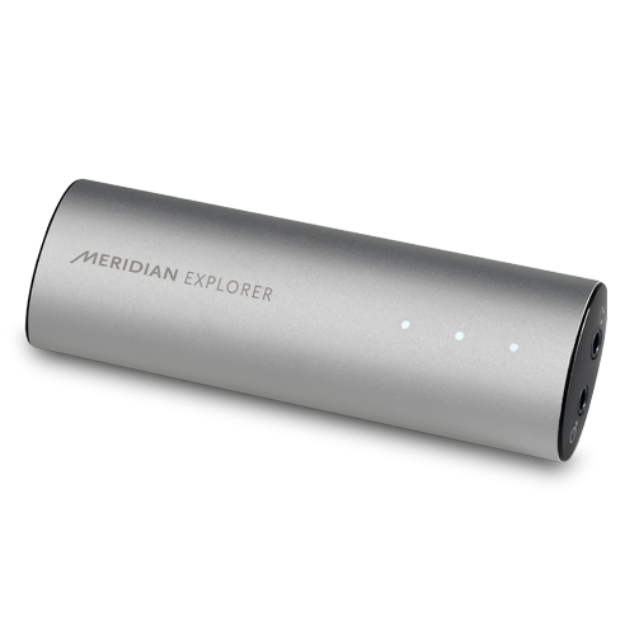 Portable and desktop audio are currently leading the charge, so if it seems like each new day brings a new headphone or DAC product announcement, you would not be wrong. When you look at the success of iTunes, eMusic and even a high resolution music site such as HDtracks, it is understandable why more and more high-end manufacturers are throwing their money behind headphones and USB DACs; that’s where the opportunity exists in 2013. Young buyers certainly lack the capital to splurge on a five-figure dedicated two-channel system but show them how to enhance their enjoyment of music for less than $1,000 and make it both portable and workable on their desktop, and you have their attention.

British high-end manufacturer, Meridian Audio, is not a brand that is likely to come up in any conversation about affordable audio, but like Lord Grantham, sometimes an old dog has to learn a few new tricks and get with the times if it wants to continue being the top dog. With the introduction of its new $300 Explorer USB DAC, Meridian just made an entire industry howl.

If using a laptop or desktop computer as your primary source for music is how you roll, it makes sense to invest in a quality USB DAC, and preferably one that has a built-in headphone amplifier. Over the past twelve months, the category of “affordable” USB DACs has exploded, due in part to the success of the DragonFly from AudioQuest, BiFrost and Modi from Schitt Audio, MyDAC from Micromega, and several others. All of these offer a level of digital audio playback unheard of for the money. One could spend a lot more on a USB DAC, and there are some exceptional ones out there that do offer that next level of sound quality, but the biggest bang for the buck right now sits in the sub-$400 category.

If you are willing to spend $2,000 on a laptop or $300 on a pair of headphones, spending between $250 and $400 on a component that will be the most important part of your music playback system makes sense. If you really want to get crazy, you can spend an extra $50 on JRiver Music Center software for your Windows-based system or $129 on Pure Music for Mac and prepared to be stunned by the improvement over that lousy program called iTunes.

So where does Meridian fit into all of this? Meridian is better known for its super-expensive DSP Digital Active loudspeaker and component systems, not to mention its in-car audio systems designed for Jaguar and Range Rover. So when Meridian first demonstrated the Explorer at CES 2013, the reaction was positive, but nobody expected the price to be anything under $1,000. Meridian competes with the likes of Wadia Digital, Naim Audio, and Ayre – all noted as high-end brands – so it wasn’t likely that the majority of us would be trying to save up enough to buy one. But by offering the Explorer DAC for $300, Meridian has pulled a nasty trick on everyone. Not only does the Explorer allow you to playback 24-bit/96kHz files, but it goes all the way up to 24-bit/192kHz. As Nigel Tufnel would say, “But this one goes to eleven.”

The 4-inch long tubular aluminum case plugs into your computer via a mini USB cable, and you have both a 3.5 mm headphone jack and a 3.5 mm  line-level output jack on the reverse end (PSA: do not plug your headphones into the line-level output. That would be bad). What is also unique about the Explorer is that the fixed line-level output can also serve as a 24/96 USB to S/PDIF converter if you use a digital toslink cable. It’s not likely to be a common use, but the fact that it can do so (although it will downsample anything above 96kHz) is pretty cool.

The early reaction to the Explorer is that it offers the Meridian sound for peanuts, a fact we imagine must be sending shivers through the hearts of its competitors. The Meridian systems that we’ve heard over the years were rich sounding, detail mavens. Being able to hear that level of sound quality through a pair of headphones or desktop loudspeakers for only $300 is rather exciting.

The best Google TVs of 2023: from Sony, Hisense, and TCL
LG brings Apple TV, Apple Music, and AirPlay to webOS Hub-based TVs
The best wireless earbuds for 2023
Sony’s 2023 AV receivers are Sonos-ready and work with wireless speakers
The best anime on Netflix right now
Best new movies to stream on Netflix, Hulu, Prime Video, HBO, and more
Best TV antennas of 2023 for local news, sports, and more
It’s still not cheap, but Samsung’s 120-inch 4K projector is $500 off today
The best kids movies on Disney+ right now
One of our favorite 65-inch OLED TVs is $400 off right now
Best Headphone Deals: Sony WH-1000XM5, Bose QuietComfort 45
You’ll be surprised how affordable this 75-inch QLED TV is
AirPods Pro are back down to their cheapest-ever price