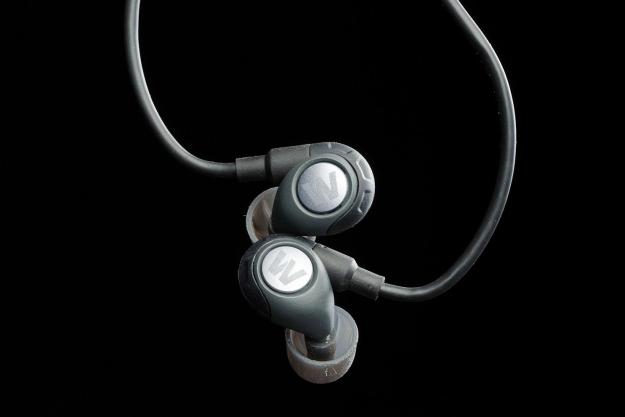 “Whether you’re an adventurer, a music lover, or something in between, Westone’s ADV Alpha should be on your shortlist.”

What do you get when a company with decades worth of experience with in-ear audio decides to take its sonic technology into the wild? If you said the Adventure Series ADV Alpha headset from Westone, you’re a good guesser (or you read the title of this review.)

Not familiar with Westone? Check with your grandparents – bet they are. That’s because Westone has been making hearing aids, hearing protection devices, military audio solutions, in-ear monitors for musicians and plenty more since 1959. Now, it is taking on the active crowd with the Alpha.

The Alpha is marketed as a “Crossover” headset, packing precision components into a rugged, water-resistant shell allowing you to take elite audio wherever you may roam. Basically, it’s a hi-fi headphone for the Bear Grylls crowd. And at $250, you might just need your own TV show to afford them. We recently got a chance to try out these burly buds for ourselves to see if they’re worth the dough. Here’s what happened.

The Alpha come in a translucent shell of hard plastic, wrapped in a cardboard casing with several pictures of folks scaling granite cliffs and jogging through rain-soaked mountain trails. The carbon-colored buds are mounted on small stands, as if on display at a museum. Pulling the earpieces free of their mount was a bit of a chore, but once removed, we were welcomed with light and attractive buds of black and silver, with soft aluminum accents and a removable braided cable. Inside the package we also found a circular hard case harboring a clothing clip, an ear wax cleaner, and a larger assortment of silicone and foam eartips than we’ve ever encountered in a headset.

Westone is a Colorado-based company that still assembles its own earpieces by hand, and the precise craftsmanship comes through the instant you hold a pair. The Alpha’s exterior is constructed from a lightweight “Magnesium Unibody”, which is layered in a water-resistant coating called IPX-3. The design takes a page from professional in-ear monitors, using a rubberized arm at the tip of the cable which wraps around the back of the ear to hold the earbuds in place. The arm attaches to the earbud with a sturdy insertion jack at a 45-degree angle.

The main bud is black and grey, with a matte aluminum bead at the exterior that sports a Westone ‘W’. At the interior is a soft depression that fits neatly against the fingertip, engraved with a stereo channel indicator. Extending from the body is a nimble 6.5mm micro-driver. Although Westone has several headsets that employ balanced armature assemblies, the Alpha uses a dynamic driver, which was surprising at the onset given its price and size.

The removable braided cable is covered in AWAC reflective material in black and grey. The cable is rough to the touch, tangle resistant, slim, and stout. Attached to the right fork is a solid 3-button iOS inline microphone, with another aluminum Westone bead at the center capping the play/pause button. The cable is approximately four feet in length, terminated with a cobra-shaped piece of the same water-resistant material that surrounds the buds. A gold 3.5mm jack extends from the tip. The cable feels extremely sturdy, but it’s a little unruly to move around.

Although we usually dread wrap-around designs, the Alpha was easy to insert, and pretty damn comfy once we got the buds in place. As with any in-ear, we felt a bit of a pinch after prolonged use, but the headphones fit as well or better than any other in-ear we’ve tested, and the snug fit provided good passive noise isolation. When we used the clothing clip, the buds stayed in place during most outdoor activities, but we’re not sure if we’d want to scale a cliff in these things. The inflexibility of the rigid cable made the earpieces a little precarious when slack bounced against our shoulders, so we’re hoping the cable loosens up over time.

The Alpha powerfully purveys three of the big ‘D’s in headphone audio: detail, depth, and dynamic expression. The in-ears did a brilliant job with instrumental separation, carving out space for each piece of the puzzle and swirling them seamlessly across a vast, elliptical soundstage. It also revealed excellent expression at the entrance of instruments, providing smooth crescendos that seemed to swell like the glow of stage lights. But the real star of the show for us was the bass. We’re not sure how Westone extruded such refined low end power from a 6.5mm driver – and we don’t need to know. The bass was thick, smooth and balmy, and we like that.

We began our journey with the Alpha by cueing up the new Vampire Weekend album Modern Vampires of the City. For those who haven’t heard it, it’s got a bit of a Kid A vibe. The Alpha had an easy time displaying the wild vocal and instrumental effects, spreading the production across the stereo image so widely that the instruments almost seemed to fall out of our ears. At times we found the upper midrange too light, but the bass seemed to compensate by cupping the production from underneath with a warm hand that was both powerful, and restrained. Innate details like room resonance, cymbal sustain and background chatter were tangibly present, and the guitars and vocals spun forth their phase-y echoes with keen precision.

The bass was thick, smooth and balmy, and we like that.

From there we moved to some classic rock, where the bass continued to impress across the lower instrumentation. “Something” by The Beatles was gorgeous from the get-go, and we had a hard time focusing on anything besides Paul McCartney’s lustrous grooves in the right channel. The warmth issued from the bass, toms, and kick drums seemed to do its best work on thicker recordings, and we liked the headset most with some tape hiss involved. Aside from the bass, the wide stereo image was also a constant presence, perhaps more pronounced due to the fine detail of the upper register. The swirling crunch of the bagpipe effects at the entrance to Led Zeppelin’s “In the Light” were superbly swished to the left and right, and the spooky entrance of the keys seemed to climb a staircase through our brain.

Turning to some of our favorite hip-hop and electronic tracks, the Alpha easily revealed the heaviest depths of the groove. Tracks by Too Short and B.I.G. hit hard below the 100Hz line with a smooth touch, seldom overpowering the upper frequencies. Depeche Mode’s “Blue Dress” was an excellent canvas for displaying the Alpha’s accurate upper register. We heard palpable timbres in the drum patches at the sides, and the collection of echoing satellites danced across the deep space in lazy arcs. We were again impressed by the unveiling of soft whispers, and minute sonic details that are often left by the wayside with other in-ear headphones.

As mentioned, there were a few moments in our testing in which the upper register was thin, and a few select tracks had too much sibilance for our taste. There also could’ve been more definition in vocals and percussion occasionally. Still, for an in-ear, we were thoroughly impressed by the care with which the instrumentation was expressed, and of course, the broad wealth of power down below.

With a warm, golden touch to the low register, a massive sonic stage, and an aptitude for the finer details, Westone’s ADV Alpha makes an excellent choice for just about any musical excursion. The $250 price tag may buy more window dressing than is necessary (we’re not sure how well a couple of millimeters of reflective cable will protect you from traffic), but the Alpha’s rugged design and gorgeous sound signature provide an excellent feature set for the serious listener. Whether you’re an adventurer, a music lover, or something in between, Westone’s ADV Alpha should be on your shortlist.