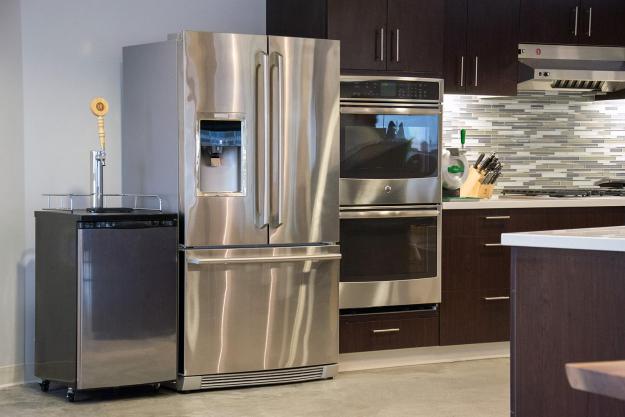 “Electrolux’s flagship refrigerator offers exquisite style but at a premium price, so hopefully you can also afford someone to keep it spotless.”

When shopping for a refrigerator, you could be forgiven for assuming that one is very much like the other. Aside from more obvious characteristics like external finish or configuration, they’re largely similar in appearance and function, but that’s where the more elegant nuances come in to play. Does the model boast adaptable shelving? How durable is the exterior finish? Is the control panel simple and intuitive or clunky and frustrating? These variables can make the difference between a trusted appliance that will last for years and buyer’s remorse before the warranty is up. At $4,149, does Electrolux’s high-end refrigerator offering make the grade, or are you better off moving down the line to the next indistinguishable steel box?

The familiar facade of the Electrolux French door refrigerator offers access to the main fresh food compartment through the upper left and right doors and to the freezer through a sliding drawer that occupies the lowermost third of the fridge’s total volume. A stately control panel on the left-hand door, which glows with a futuristic and stylish interface, punctuates the steel face. The refrigerator’s overall dimensions have it hemmed in at a relatively conservative 36 ¼ inches wide, 70 inches high, and 27 inches deep, plus an extra 2 ¾ inches for the handles. This is standard for counter-depth offerings and should fit into most kitchens nicely without oppressing the immediate surrounding area.

The doors and drawer all feel very stable and close with a satisfying “thud.” The flipper mullion, which is designed to act as a seal between the two doors when they’re both closed, is attached to the right-hand door. It’s well out of the way when opening only the right side of the fridge but acts as an obstruction when opening only the left, preventing you from opening the left-hand crisper drawer without opening the right-hand exterior door as well. The freezer utilizes a “self-closing” drawer and is easily sealed with a light nudge.

The finish is the ever-popular brushed stainless steel. We found that the overcoat does not offer any real protection against fingerprints and was prone to scratches. A quick brush with a wedding ring left a minor but visible scratch. Otherwise, the external build is solid and does not rock or rattle.

The fresh food compartment’s interior offers spacious capacity, especially considering that it houses an icemaker in its counter-depth, French-doored confines. We measured the space at 18 inches deep when measured to tip of the shelves, 32 inches at its widest point, and 22 inches high when excluding the crisper and chilling drawers. The shelves offer over 18 square feet of stackable space, which we measured with a common brand of re-sealable containers in three-, five-, and seven-cup capacities. On the top shelf, next to the icemaker, the containers were able to fit two stacks of 10-cup’s worth of containers deep, and three stacks wide. On the second and third shelves, where the icemaker is not occupying space, they fit four stacks wide.

The interface is bright, clear and offers excellent contrast with white and blue lights that would be right at home on a piece of Tony Stark’s tech.

The compartment’s lighting is soft and even. It gradually illuminates by way of eight LED bulbs mounted inside the doors’ edges. There’s also a separate light source for the freezer below.

The Spillsafe glass shelves have a simple and elegant look, evoking the design of an ultra modern serving tray. They’re braced with a traditional and sturdy cantilever hook and remove easily for cleaning, but they do not offer any rapid adjustment to accommodate taller groceries. Don’t expect for them to perform any fancy tilts or slides, so that you might wedge that magnum of champagne amongst your yogurts and pickles.

The crisper drawers each occupy half of the compartment’s lateral space and tout Electrolux’s Luxury Close, meaning that they slide shut softly and effortlessly on a smoothly gliding track. Occasionally, we found the doors wouldn’t close, because the drawers didn’t actually make it all the way to their final destination. They each offer a standard humidity control slider, which itself moves with some small degree of stickiness, indicating a fit that is not up to the rest of the fridge’s standards. The bins themselves can each accommodate a week’s worth of produce; we measured this as two tomatoes, four peppers, four carrots, two ears of corn, a bundle of celery, and two small heads of lettuce and found room to spare.

Beneath the crisper drawers rests the EW23BC85KS’s most attractive offering: the Perfect Temp drawer. This space occupies the entire width of the fresh food compartment and has it’s own control bank that allows for the selection an array of chilling temperatures for items like meat and poultry, fish and shellfish, cheese, white or sparkling wine, or chilled beer. It can also store up to three custom temperatures based on your own personal preferences. The affected temperature occupies a relatively small and contained volume, so the temperature readjusts within a few degrees quite rapidly. It’s a grand feature and ideal for households who find themselves as a hub for entertainment and refreshment.

The doors contain a fairly standard array of adjustable and removable storage pods, all cast in a durable transparent acrylic. The right drawer holds four bins, one of which is large enough to hold a two-gallon container of milk and another that perfectly fits a standard container of one dozen eggs. The left door has room for two-and-half bins arranged around the ice dispenser, the lowest of which tilts out to 45 degrees for easier access but is only tall enough for your smallest condiments.

The primary icemaker and dispenser are located where you’d find them in most similarly equipped French door fridges: in the upper left hand corner of the main fresh storage compartment. Ice is produced in a rounded cuboid shape—not the traditional “skis”—and is intended to melt slower in drinks as you sip. It’s an unexpected but welcome feature.

Air and water filters are both readily accessible without the need to rearrange any of the fridge’s contents. The water filter is a binocular-shaped canister at the main compartment’s bottom leftmost edge, and ejects with a simple button press when it’s ready for replacing. The air filter is located on the door, beneath the dairy bin.

The freezer offers almost seven cubic feet of space, including supplemental lateral space by way a sliding basket and an ancillary drawer. The larger, deeper compartment is bisected by a sliding divider, above which the basket extends across the entire width of the freezer where it’s the ideal location for storing boxed frozen food that might get crunched in the larger bin below. The aforementioned ancillary drawer—located in the freezer’s uppermost right corner—is dedicated to soft serve ice creams and frozen yogurts, promising to keep those at the most delicious and comfortable serving temperatures. To the right of the soft serve drawer, you’ll find the unit’s auxiliary icemaker. This one doesn’t have an exterior dispenser, naturally, but its bucket is perfect for filling up a punch bowl or for topping off a cooler during parties.

The refrigerator’s primary interface is located on the left door above the icemaker. It’s bright, clear, and offers excellent contrast with white and blue lights that would be right at home on a piece of Tony Stark’s tech.

Electrolux’s Wave Touch panel allows users to access several features, including the ubiquitous ice and water selection controls, dispenser light, control lock, or fast freeze. When the display is in sleep mode, only the ice and water controls are illuminated, but a gentle brush of the display glass is all that it takes to bring the other options into view. A tap of the “options” key presents users with the ability to adjust the temperature of either compartment, enter vacation mode, check filter status, disable the temperature display, or change the temperature mode.

Inside the fresh food storage, there’s a smaller auxiliary control panel that’s specifically used to select the temperature of the Perfect Temp drawer. This panel sports two keys with which you can select one of the nine pre-programed or three custom temperatures.

The bins can each accommodate a week’s worth of produce, with room to spare.

The EW23BC85KS comes with CSA certification but is not Energy Star certified. The FTC estimates its annual energy usage at 539kWh and an average annual operational cost of roughly $57.

The refrigerator operates with a constant low hum that did not prove to be too distracting while running in our test kitchen. The icemaker is fairly quiet, except of course when empty, during which time its hollowness makes the sound of its operation and ice production more noticeable.

The entire unit is covered by a one-year warranty, with coverage of the closed refrigeration system extending to five years. The warranty compares favorably to most of its competitors, Maytag being one of the few manufacturers beating it out with a 10-year replacement guarantee for the compressor.

Electrolux support is available via e-mail or by phone six days a week. Our attempts to reach them by phone during business hours resulted in an average wait of no longer than five minutes.

The EW23BC85KS touts some high-end features with a price tag to match. We found one on NewEgg.com at just over $3,500, which is a good deal less expensive than the suggested price but is still a great deal more than fridges with similar capacities and configurations, like the Frigidaire FGHF2366PF that we reviewed back in April.

The fridge has some nice features that separate it from all the other stainless steel, French door models you see, but they still may not be enough to justify the upfront expense, not to mention the cost of constantly wiping away all those fingerprints.