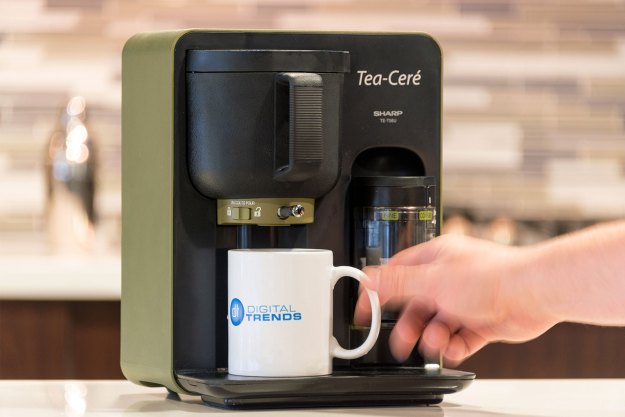 “For those who love matcha, nothing competes with Sharp’s Tea-Ceré.”

Like espresso aficionados, matcha tea drinkers take their drink extremely seriously. So seriously that matcha lovers reading that last sentence likely scoffed at their drink being compared with coffee — and for good reason. Boasting a health profile that boosts one’s metabolism, burns calories, and is packed with antioxidants and other vitamins, an affinity for matcha tea is one heck of a healthy vice.

Understanding this green tea craze for what it is, appliance giant Sharp designed and manufactured a one-of-a-kind matcha tea maker called the Sharp Tea-Ceré Matcha Tea Maker, but you might know it by its far more creative model name, the TE-T65U (what, that doesn’t ring any bells?).

A grinder/brewer/frother package, the Tea-Ceré is a one-stop shop for matcha lovers who want to craft high-quality tea whenever they like. To see if it lives up to the billing, we gave the Tea-Ceré a spin in our office kitchen for a few weeks. Here’s what we found.

Unboxing and setting up

Out of the box, Sharp’s Tea-Ceré comes with an attachable tea mortar, powder saucer, large tea container, cleaning brush, tea spoon, and water reservoir capable of holding just shy of three cups. Setup is done with ease, thanks to the step-by-step walkthrough in the user manual, requiring just a bit of assembly before officially being ready for use.

The Tea-Ceré comes ready to brew matcha right out of the box, but there’s one key thing missing: tea. Thankfully, Sharp shipped a healthy helping of tencha tea, a name that refers to how the leaves are grown and processed — for details, see this site. Aside from this, the only thing standing between us and freshly crafted matcha was plugging in the device, filling the water reservoir, and scooping our desired amount of tencha into the companion grinder.

Billed as offering “real matcha in four easy steps,” the entire tea making process takes roughly 10 to 15 minutes, depending on the strength and amount of tea you’re after. For a proper cup of highly concentrated matcha, the machine requires roughly five heaping scoops — from the included spoon’s small side — of tencha to be deposited into the grinder. With this amount of tea, a quick selection of the Max cycle started the grinding process, which at this level can be anywhere from 6 and a half minutes all the way up to 15 minutes. Did we mention that matcha is very finely ground?

Leaving the mortar to sit, even once, could easily spell disaster.

Since it’s authentic matcha we were after, the process only requires filling the water reservoir to the first level — this helps achieve maximum concentration. After adding the freshly ground tea and selecting the HOT setting, the machine went to work, boiling water and mixing it with the powder.

The process also includes a frothing and whisking function which helps create a true cup of matcha tea. Thankfully, this process didn’t take nearly as long as grinding, with the Tea-Ceré pumping out fresh matcha in just 3-4 minutes; the time it takes to brew relies entirely on how long it takes to heat up the water in the reservoir. The machine has a special spigot that let us get as much tea as we want with the simple flick of a switch.

While this brew process produced a small cup of traditional matcha, the Tea-Ceré also excels at delivering cups of standard green tea — i.e. lower concentrated batches of brew. Be it one, two, three, or four cups, the Tea-Ceré’s mortar is equipped to handle as few (or as many) tea leaves as needed to craft a proper cup.

What about the taste?

Like coffee — and this is the last coffee comparison, we promise — the amount of ground leaves used in the Tea-Ceré dramatically alters the strength (and taste) of the resulting beverage. Whereas matcha is an ultra-concentrated hit, the Tea-Ceré also excels at whipping up subtle doses when a green tea shock to the system is unwanted.

But this is exactly where Sharp’s machine earns its stripes. After all, why put a grinder on the thing if not to make the freshest, best tasting tea? No other machine stands toe-to-toe with the Tea-Ceré in terms of offering a grinder and brewer, so there’s little doubt that the rig boasts the capability of serving up a high-quality cup of matcha. Sure, you could buy matcha powder online, but there’s something to grinding your own — however tedious the process actually is. Coffee lovers know what I’m talking about (oops, sorry.)

And how’s it taste, you ask? The matcha itself — strong, hot, and invigorating — was bracingly delicious. But while the matcha delivered the strongest flavors, brewing a less-intense cup of tea proved a nice alternative. Essentially a watered-down version of matcha, ordinary tea from the Tea- Ceré was consistently dependable and enjoyable both hot or cold.

Like any home appliance, Sharp’s Tea-Ceré requires thoroughly consistent cleaning to remain in tip-top condition. While some of the manual’s cleaning tips are no-brainers, such as cleaning the tea saucer, drip tray, and tea container after every use, the unit also benefits greatly from monthly checks of its air filter.

Matcha itself — strong, hot, and invigorating — was bracingly good.

Then there’s the tea mortar, a novel piece of the device but one that gave us fits after almost every single use — especially after longer grinding sessions. Early on, the mortar would disassemble with ease; after a while, because of increased build up or wear and tear, taking it apart became much harder. Later on, it was almost impossible to separate the lower mortar from the upper mortar unit, even after soaking it in warm water as the user manual suggests.

This is exactly why routine maintenance is paramount. Leaving the mortar to sit even once after grinding a batch of tea could easily spell disaster for the attachment. Routine cleaning helps avoid the gumminess of once-ground tea leaves and should work wonders for maintaining the quality and longevity of the Tea-Ceré.

As long as Sharp’s Tea-Ceré Match Tea Maker is purchased either directly from the company itself or a licensed retailer, the machine carries a one-year warranty on defective parts or required labor. Be it taking it into a Sharp Authorized Servicer or shipping it to one, owners must provide proof of purchase in order to make use of the warranty.

At $200, Sharp’s Tea-Ceré Matcha Tea Maker is on the expensive side — but then again, no other machine boasts a tea leaf grinder and brewer, putting it in a league of its own. That said, the device requires considerable upkeep and cleaning. Avoiding this for any brewing or grinding device is surely a recipe for disaster, but the stakes are higher with the Tea-Ceré: forgetting just once could make this spendy unit nothing more than a tea brewer.

Cleaning issues aside, the Tea-Ceré does get the one thing it’s supposed to do right: brewing a fine cup of matcha. Be it a highly-concentrated variety or something a little less intense, Sharp’s tea maker is an impressive brewer. For those who routinely enjoy tea as a hot (or cold) beverage, there’s really no alternative to Sharp’s Tea-Ceré. Unfortunately, this means owners will have no choice but to accept its flaws.

As far as tea leaf-grinding, tea-brewing devices go, Sharp’s Tea-Ceré stands alone. There are large tea grinding machines for commercial use, but Sharp’s entry into the space provides at-home tea drinkers the ability to grind and brew from the comfort of their own kitchen. This is surely a boon for its popularity and success — but don’t think exclusivity make it a must-buy appliance.

Though we only gave the thing a whirl for a few weeks — and brushed its demise in the process — it’s unlikely that owners will have the luxury of enjoying the Tea-Ceré for longer than six months to a year. This diminished longevity is based entirely on the fact that the tea mortar requires constant upkeep and maintenance. Ignoring this cleanup requirement altogether could spell disaster for the device after just a use or two — it’s that important.

If you were to meticulously clean the mortar after each use, it’s entirely feasible the Tea-Ceré would last longer than a year. But based on our tests, we say you’ll be looking for a replacement before you felt you got your money’s worth.

How much do you fancy a cup of matcha green tea? What may seem excessive to some is a steal to others and Sharp’s Tea-Ceré is no different. If you consider yourself a green tea aficionado who doesn’t see a problem maintaining the machine after each and every use, this is for you. For the rest of the public at large, consider a new tea pot.