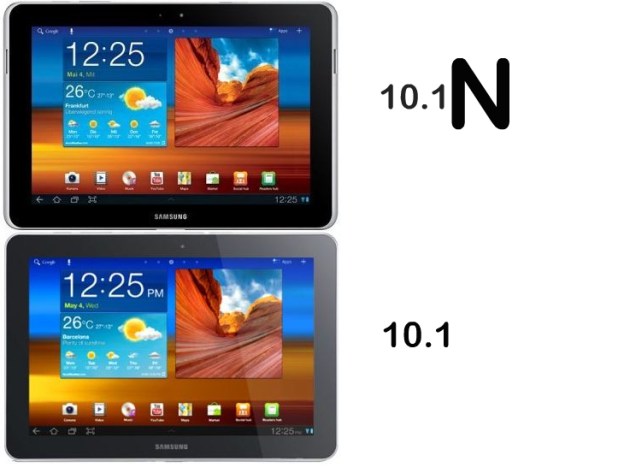 It was never going to be enough, was it. If Samsung thought that bringing the bezel slightly up and over the front of its Galaxy 10.1 tablet would help break it free from the sales ban imposed on it by a German court, then they were wrong. Apple’s lawyers have filed another motion seeking a ban of the Korean company’s modified tablet.

The ban, initially imposed earlier in the year and made permanent in September, was the result of a claim by Apple that the design of the 10.1 too closely resembled that of its iPad device.

To get its tablet back into German stores, the Korean electronics giant recently tweaked the design of the 10.1 and added an N to its name. The folks in Cupertino are evidently having none of it.

According to Dow Jones Newswires, Apple has requested a preliminary injunction and is looking for a sales ban on the 10.1N in Germany. The hearing has been set for December 22 at a court in the German city of Duesseldorf.

Lawyers representing Apple will argue next month that the small design changes in the Galaxy 10.1N still infringe its patents and are not enough to differentiate it from its iPad device.

In an email statement, Samsung said that the move by Apple has no impact on sales and distribution of its tablet – for the time being at least. Indeed, the 10.1N is still showing on the German online shopping site cyberport.de, where it’s selling for 530 euros.

The timing of the hearing comes so close to December 25 that most people will have done their holiday season shopping, so even if a ban is imposed by the court on December 22, it won’t have much effect on Christmas sales of the 10.1N.

Apple’s request for an injunction is the latest move in an ongoing global spat between the Cupertino company and Samsung regarding a series of patent infringement claims in around ten countries across four continents.

Topics
Video-editing app LumaFusion to get a Galaxy Tab S8 launch
This 10-inch Lenovo tablet is $129 for Cyber Monday (selling fast)
You won’t believe how cheap this iPad is, thanks to Cyber Monday
5 Apple gadgets you really should avoid this holiday season
Best Black Friday iPad Deals: iPad Air, iPad Mini, iPad Pro
Fitbit Cyber Monday Deals: Save on Sense 2, Charge 5, and Versa 2
Apple Cyber Monday Deals: Apple Watch, AirPods, iPad, MacBook
Get these JBL earbuds and 4 months of Music Unlimited for $25
OnePlus’ new Android update policy matches Samsung, shames Google
How Apple can fix iOS 16’s messy lock screen customization in iOS 17
The best voice-changing apps for Android and iOS
Spotify Wrapped 2022: what it is and how to view it
Save $225 on the unlocked Samsung Galaxy S22 Ultra with this deal