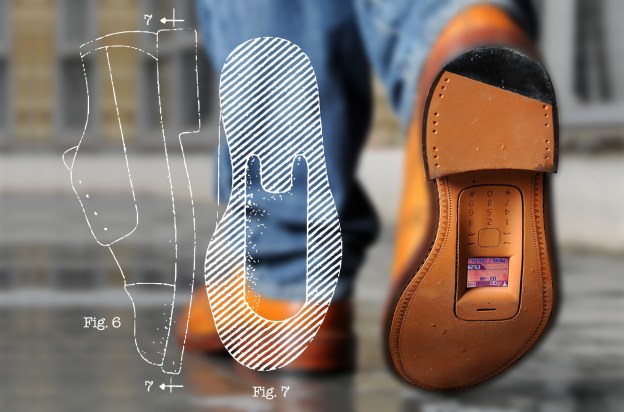 We’re all familiar with the patent wars that took place in 2012 between Samsung and Apple – the ones that are still playing out to this day. It’s all about intellectual ownership, who came up with what first. In the mad dash to claim every single idea known to man (and several known only to dolphins), there have been some odd patents filed and granted. These are things that, in reality, there’s no practical use for. But you can never be too sure when claiming ownership of an idea. In the patent race, there are no bad ideas. Take, for example, Samsung’s recent air guitar patent. Weird? Sure. Essentially without purpose? Yeah, probably. While most of these are unbeatably impractical, we secretly kind of hope they are put to use some day.

Airbag for your phone

Even the greatest thinkers of our time have some pretty terrible ideas. Most of them don’t file them for a publicly accessible patent, though. Amazon founder Jeff Bezos noted a problem with people dropping their phones, likely from a spike in protective phone case sales on his massive e-commerce site. His solution? An airbag that fires out from your phone to protect it from impact damage. The patent is for a process that can measure the potential impact of a fall, then tells the phone to brace by inflating its airbag. Just wait until the prank gift world gets ahold of this patent and makes your phone’s padding a whoopee cushion.

You want the notifications from your phone to be accessible as quickly as possible. That’s the idea behind things like the Pebble watch and other devices that make your phone closer to you without requiring a reach into your pocket. Nokia decided to take it a step further with it’s patent for vibrating tattoos. It can be visible, invisible, a custom symbol, whatever you may want. But it’s placed on your skin and will offer a stimulus – the vibration – to you via magnetic fields when your phone rings. First person to get a vibrating trap stamp loses.

Would it be fair to just put the lyrics to “Banana Phone” for this entry? James Laird Rickard – remember the name, he’ll come up again – filed a patent for a protective cover to insert a phone in. This seems more reasonable than an airbag until you learn that phone cover is a banana. Because when you think of fruits that aren’t ruined or damaged when dropped, you definitely think banana, right? Likely more a novelty than anything else, the banana phone somehow never quite caught on.

You know the phrase, “if at first you don’t succeed, try, try again?” If you’re James Laird Rickard, do not listen to that advice. Your first attempt at a protective phone cover failed as there is almost nothing practical about carrying around a banana all day long. But do you know what is less practical than that? Carrying a shoe around all day long. That is what owners of Rickard’s other patent, the shoe-shaped phone case, would have to do. Though it does have its influence in Get Smart, this idea is anything but. What’s worse about this particular patent is what it inspired.

While the previous patent was just a shoe shaped holder, this patent actually suggests you walk on your phone. It turns your actual shoe into a place to put your phone when you aren’t using it. Any time the drawing to show off your idea as it might be implemented features a Croc shoe, it’s a pretty solid tip off that it’s a bad idea to begin with. Of course, that didn’t stop this one from being approved because the US Patent office really doesn’t have a high bar when it comes to ideas.

Ever been holding your phone and thought, “You know what would be way more convenient? If I could type with the keyboard facing a totally different direction than where it is right now. Maybe behind the screen, set so the screen appears vertically while the keyboard is horizontal.” Probably not, but that’s why you’re not Research in Motion. The inventors of BlackBerry are also the inventors of the rotatable phone keyboard, unfortunately patented with the title “Handheld electronic device with rotatable member.” Check your phrasing, RIM.

Apple loyalists know owning an Apple device is as much about the experience of a product as it is the product itself. Apple aims to give its users the most enjoyable all around experience imaginable. The fruit-themed company knew it’s phone users would be typing away quite a bit, so it figured it would try to offer some relief to those furious fingers. It’s solution was an air-expelling keyboard, a solution that would have required physical keys to create. Every time you would press down on a key, air would shoot up through the tiny cracks between keys to provide a soothing blast of air. Maybe it’s the same air that will inflate that airbag we mentioned earlier.

Your phone does a lot, but do you ever feel that it’s limited in what it’s capable of because of what is attached to it? Microsoft thought it could improve upon the mobile experience by adding some accessories to its smartphones. It’s way of doing this, though, was by making a modular bay that would slide out – like the sliding keyboard – and could then have different pieces plugged into it to change functionality. This is a great idea for allowing more specific focus to get the most out of a device, except it means you have to carry around a bunch of extra parts on the off chance you want to utilize a given feature. That means we’re a step closer to having a physical sling shot to use with Angry Birds.

Video-editing app LumaFusion to get a Galaxy Tab S8 launch
MediaTek’s new Dimensity 8200 brings flagship performance to cheaper phones
Best Phone Deals: Save on Google Pixel 6a, Galaxy S22 Ultra
Latest iPad is $50 off, with delivery in time for the holidays
This free Android app gave my phone cloning superpowers
OnePlus 11’s controversial design returns in new ‘official’ renders
Update your Google Pixel 7 now for three big security and audio features
The Nothing Phone is finally coming to the U.S., and I can’t wait
Today’s best deals: TVs, laptops, iPads, robot vacuums and more
Google Pixel 7a: release date, price, specs, and all other rumors
It’s 2022, and customizing my iPhone is still horrible
Best over-the-counter hearing aids for 2022
Save $70 on the Fitbit Versa 4 when you buy it today