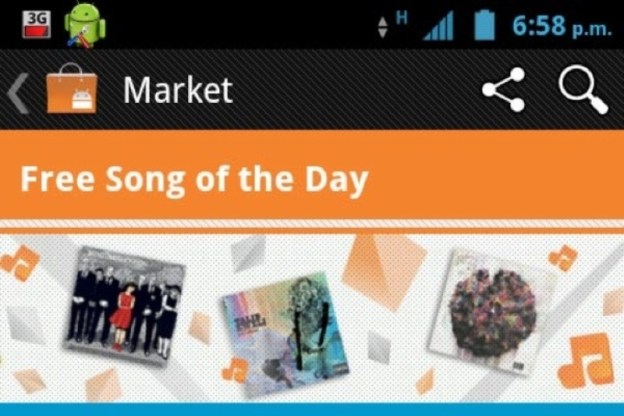 On Friday news broke that a Google music store would be launching in the very near future, a rumor corroborated by the fact that Google sent out event invitations that seemed to confirm as much. Now the Spanish site TecnoDroidVe has gotten its hands on some leaked screen shots that lay it all out for us.

As you can see, the Google Music UI is very Android-reminiscent—which probably has to do with the fact that the screenshots were taken when a blogger for the site found the app using his HTC Inspire 4G. The service wasn’t working,  but he was able to wander around in it. Features like a free song of the day and artist recommendations are there, and notice that the pricing on the Green Day screenshot is on par with Amazon and iTunes. Full albums reportedly were listed for as low as $8.49.

The branding also looks similar to what we’ve seen from Music Beta for Google, and its accompanying blog Magnifier. Making sure there’s unity across the line is important for Google to push the service and keep users interested on the Web and via its mobile platform.

Of course, that’s provided the application will have the music catalog to attract users in the first place. Last we heard, Google hadn’t secured the rights to music owned by Sony Music Entertainment or Warner Music Group (there have been ongoing issues from rights holders about Google failing to hinder online music piracy). However, the images show off artists under all four labels, so it’s possible Google was able to strike a deal.

When it does launch, Google Music will take cues from Facebook and include a “listen”-like tool, allowing your G+ friends to listen along with a song you’ve shared once for free. This Google+ integration is likely a key to giving Google Music some life in the event of a light content library, and would probably work in the interest of both Google properties.