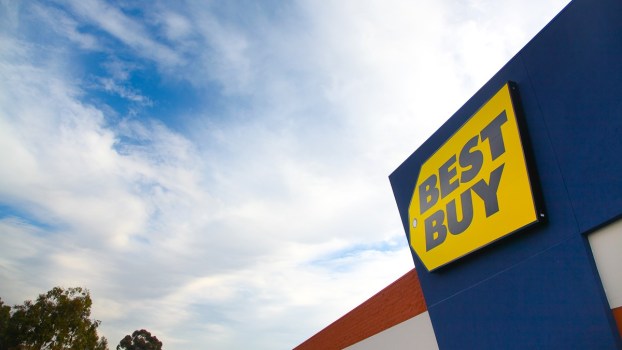 Stockrooms and shelves at Best Buy stores across the US are apparently full of unsold Hewlett-Packard TouchPads. According to an AllThingsD report, the electronics retailer took delivery of 270,000 of the devices – and has so far sold a paltry 25,000.

The news was revealed to AllThingsD via “sources familiar with the matter” and comes a day before HP releases its quarterly earnings report.

One source said putting sales figures of the tablet at 25,000 may be being “charitable” given that the figure might not include returns from dissatisfied consumers.

According to the report, Best Buy is far from happy about the situation. The company apparently would like HP to remove the unsold tablets so that it can get the space back for things that do sell.

An HP executive is even thought to be traveling to Best Buy’s HQ shortly in order to try to persuade the company to give the TouchPad a little more time.

The device hit the shelves at the start of last month – and by the sounds of it, promptly gathered dust. The 16 GB unit was originally priced at $499.99, with a 32 GB model going for $599.99. However, in a move two weeks ago that adds some credence to today’s news, the company tried to make the tablet more attractive to consumers by knocking $50 off. A week later, it knocked another $50 off.

But two price cuts close together may have had the opposite effect to what was intended. Envisioneering Group’s Rich Doherty told AllThingsD: “After the initial surge of interest after the July release, all those price promotions have caused consumers interested in buying a TouchPad to pause because they think the price is going to fall further.”

If the quarterly earnings report released tomorrow contains any sales figures, it’s thought they’ll be the “channel sales” (to retail stores like Best Buy) as opposed to “sell through” figures (to consumers).

Reviews of HP’s TouchPad have been mixed since its launch last month. Meanwhile it’s Apple’s iPad that continues to dominate this increasingly competitive market.

Topics
Video-editing app LumaFusion to get a Galaxy Tab S8 launch
The best tablets for seniors for 2023
The best small phones for 2023
The best Bluetooth trackers for 2023
The best Android tablets in 2023: the 8 best ones you can buy
Is the Samsung Galaxy A14 5G waterproof?
The best fitness trackers in 2023: our 10 favorite picks
Watch the Galaxy S23 Ultra get unboxed a week before launch
The best iPhone apps in 2023: 50+ apps you need to download now
The iPhone 15 Pro’s rumored new design is one I can’t wait for
The best folding phones in 2023: our 6 favorite foldables right now
You can finally take ECGs and track AFib on a Garmin smartwatch
I bought a $50 Apple Watch Ultra clone, and it blew me away