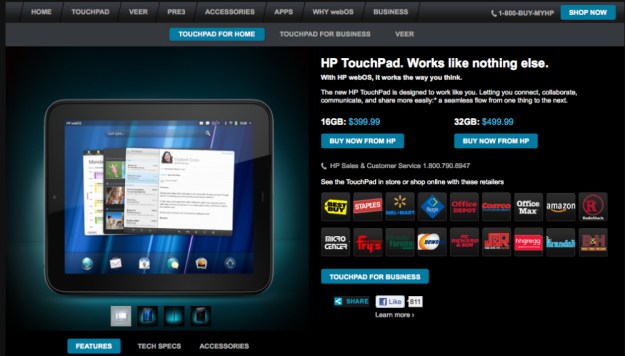 On August 3 we reported Hewlett-Packard knocking $50 off the price of its recently released TouchPad tablet. Two days later word came through that the company was offering $100 off the tablet’s launch price with the aid of a voucher valid for the weekend.

The positive reaction to the discount over the weekend evidently caught the attention of HP execs. Speaking to the LA Times, Stephen DiFranco, HP’s senior vice president of personal systems, said, “Despite the very short runway, we were pleased with customer response and, as a result, have made the decision to implement a $100 price drop on the US list price of the HP TouchPad, enabling both HP and our channel partners to be even more price competitive in the marketplace.”

Reviews of the 9.7-inch TouchPad have been fairly mixed, though its webOS operating system has been generally well received.

According to the LA TImes, no comment was made about whether the price of the upcoming 4G version of the TouchPad will be affected, though we can assume it will be. A 32GB version is currently available for pre-order on Amazon for $699.99, though there’s no word yet on a specific release date.

And if you happened to fork out for a TouchPad prior to the weekend price cut, HP is offering a $50 voucher for apps in its App Catalog.

Apple’s dominance of the tablet market with its iPad has left other tablet makers scratching their heads, wondering what it is they have to do to make some headway with consumers. Creating a decent tablet would be one way to start, then setting it at a competitive price that really grabs the attention.

If HP’s price cut has those looking for a cheaper alternative to the iPad reaching for their wallets, execs at Samsung (Galaxy Tab) and Motorola (Xoom) will certainly be taking note. Could HP’s move mark the beginning of a serious price war among the tablet big-hitters?