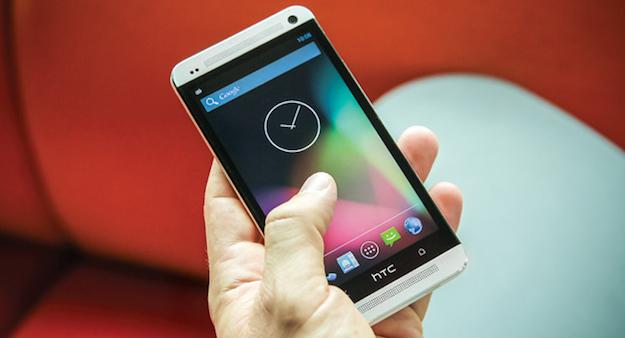 So much for HTC saying it has no plans to make a version of the HTC One with stock Android – a quote attributed to an unnamed HTC executive following the launch of the Galaxy S4 Google Edition during Google I/O. While suspicions were raised, we now know this was a big, fat lie. Google’s VP for Android, Sundar Pichai, has personally announced an HTC One with stock Android, and it’s coming very soon.

Speaking at AllThingsD’s D11 conference, Pichai pulled the new version of the HTC One out of his pocket, explaining that both it and the Galaxy S4 are part of a plan to, “Actively work with partners to make the best customer experience possible,” and later added the phones are just, “A small step in the right direction.”

The HTC One will feature the latest version of Android Jelly Bean, without HTC’s Sense 5.0 user interface, and will go on sale through Google Play on June 26, and cost $600. This is the same day as the Galaxy S4 arrives, but the Samsung flagship will cost $50 more to secure. You’ll have to be quick if you want one, as it has been warned the phones will be in short supply. But then, you already knew that. After all, this is a product sold by Google.

Anyone fearing these latest, and very expensive, Nexus-like devices spells the end of cut-price Nexus hardware such as the Nexus 4, will be relieved to hear Pichai say the Nexus program will almost certainly continue. A white version of the Nexus 4 was announced earlier this week, and we’re hoping for an update to it and the Nexus tablets later this year.

Information regarding the promptness of future Android updates for the Google HTC One isn’t known, although we’d expect it to be the same as with the Galaxy S4, and neither is there any confirmation of an international launch. So, is this the last of the new-generation stock Android phones, or are Sony and LG also going to join in the fun?

Video-editing app LumaFusion to get a Galaxy Tab S8 launch
The first Android 14 preview is here, and these are its 3 biggest changes
Is the OnePlus 11 waterproof, and does it have an IP rating?
The OnePlus 11 totally changed my mind about OnePlus phones
This is the best OnePlus 11 pre-order deal we’ve found
AirPods Pro are back down to their cheapest-ever price
I love (and hate) this stunning iPhone 15 Ultra concept
Samsung Galaxy S23 vs. iPhone 14: Apple’s grip is starting to slip
Strap a Samsung Galaxy Watch 5 Pro on your wrist while it’s $50 off
There’s a huge sale on Kindle e-readers happening today
Going to pre-order the Galaxy S23? Don’t miss these deals
Best Google Pixel Deals: Pixel 7, Pixel Watch, and Pixel Buds
OnePlus wants to tempt you back to Android tablets with the OnePlus Pad