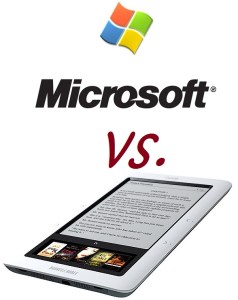 Microsoft is going after Barnes & Noble for allegedly using its software without permission. According to the company, Barnes & Noble Android e-readers the Nook and Nook Color infringe on patents regarding UI, as well as browsing and downloading. Microsoft also claims that Foxconn and Inventec are guilty of violating its various patents.

According to Microsoft’s corporate VP and deputy general counsel Horacio Gutierrez, “the Android platform infringes a number of Microsoft’s patents, and companies manufacturing and shipping Android devices must respect our intellectual property right.” The statement goes on to say that the patents are specifically “essential to the user experience, including: Natural ways of interacting with devices by tabbing through various screens [to find information]; surfing the web more quickly; and interacting with documents and e-books.”

Gutierrez is quick to note in a separate blog post that this type of legal action isn’t something Microsoft likes doing. “This is only our seventh proactive patent infringement suit in our 36-year history. But we simply cannot ignore infringement of this scope and scale.” He also mentions that Microsoft prefers licensing its innovation instead of punishing those who use it. Despite this, general consensus so far seems to be that Microsoft is being a “patent troll,” and instead of working on its own development, reaching for grounds to sue competitors. A variety of comments on its blog criticize the US patent system and Microsoft for abusing it, and most believe it will be extremely difficult for Microsoft to get the Barnes & Noble e-readers pulled.

Microsoft sued Motorola in 2010 over its use of Android software, which has yet to find resolution. According to the company, it has similarly been pleading with Barnes & Noble, Foxconn, and Inventec to follow in the steps of Amazon and HTC: Pay up for licensing fees, and Microsoft will leave you alone. Apparently, they’re unwilling to do so and now the tech giant will see them in court.

Video-editing app LumaFusion to get a Galaxy Tab S8 launch
Protect your home with the Ring Floodlight Cam — now 25% off
Apple is banned from selling 5G iPhones in Colombia — here’s why
Barnes & Noble unveils budget e-book reader
Microsoft patent imagines a seemingly perfect foldable phone
Apple comes clean with what it really thinks about iPhone 14’s Dynamic Island
Waiting for Touch ID on a new iPhone? This report has some bad news
Is the Apple Watch UItra too big? We took a bunch of photos to show you
Samsung Galaxy Watch 5 Pro vs. Galaxy Watch 4 Classic
Xiaomi’s new phone has a 200MP camera — and its photos are stunning
It’s official: Apple is required to make a USB-C iPhone by 2024
The Google Home app finally has the big redesign you’ve been waiting for
Relax, the EU’s scary USB-C rule won’t rob you of fast-charging benefits