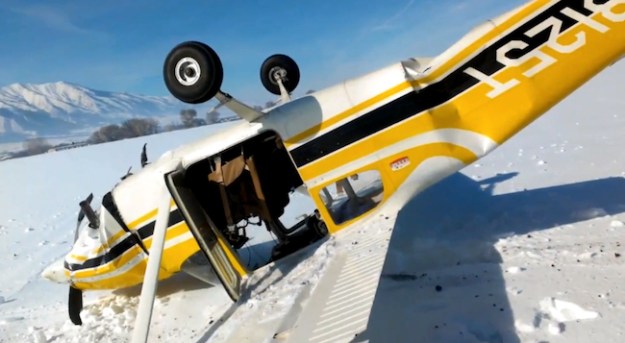 If you were a passenger in a single-engine aircraft that’s minutes from making a crash landing, would you 1- write notes to loved ones in case you don’t make it out alive, 2- wet yourself while screaming “We’re all gonna die”, or 3- both 1 and 2.

During a birthday flight (a birthday flight!) over Cache County in Utah recently, passenger Jonathan Fielding did none of the above. Instead, when the pilot told him the plane’s engine was seizing up, he grabbed his smartphone and filmed the rather nerve-racking journey back to terra firma.

Fielding was on board the Cessna 175 plane with his wife (it was her first ever flight), their seven-month-old baby son and his wife’s mother.

With the pilot anxiously looking for somewhere to bring the plane down, Fielding, with admirable calmness, reassures his family that everything will be OK,  uttering the following lines as the plane descends to Earth:

– “It’s kinda scary and kinda exciting at the same time.”

And all this while still managing to compose some delightful shots of Utah’s stunning wintry landscape. The pilot, however, remains silent, hopefully deep in concentration rather than busy internally disagreeing with everything Fielding is saying.

Ninety seconds into the extraordinary video, the plane crashes onto a snow-covered field, finishing upside down and pretty beaten up. Miraculously, everyone on board walked away from the wrecked aircraft relatively unharmed.

“The pilot was experienced in field landings but unfortunately the snow caused the landing gear to sever from the plane, flipping the plane front to back and smashing the tail before it came to a rest upside down,” Fielding wrote after the incident. “No one was hurt in the accident save for bruises, whiplash and minor cuts.”

Fielding kept his phone running throughout the descent and crash landing, though the impact caused it to fly out of his hand. At the end of the video, Fielding asks his wife, “Will you ever fly again?” to which she replies, somewhat bravely, “Yes.”