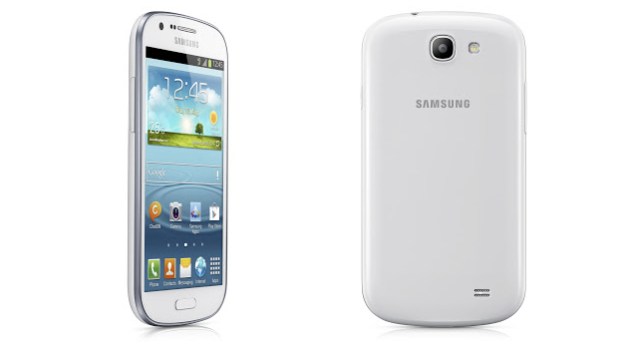 Check out our review of the Samsung Galaxy Express smart phone.

For a mid-range smartphone, the Samsung Galaxy Express certainly has an uncanny ability to grab headlines, as we first wrote about it in September last year when AT&T announced it would be stocking the handset, then again in early November after it was detailed by Samsung and given its official release date. Samsung has now rolled the phone out again, as the Galaxy Express has shrugged off its AT&T branding and is presumably about to head out into the wide, exciting world.

Last time out, Samsung was a little coy about several of the Galaxy Express’ features, but that’s not the case this time. There is even a slight spec alteration between it and its AT&T-locked sister phone to try and spot.

Let’s start with the screen. The Galaxy Express has a 4.5-inch Super AMOLED Plus touchscreen with a 480 x 800 pixel resolution, making it very similar to the panel fitted to the Galaxy S2. Next up is the processor, which is a 1.2GHz dual-core chip. Did you spot it? Samsung has slowed the Express’s processor down in this model, as the AT&T phone is clocked at 1.5GHz. Sneaky, Samsung.

The camera on the rear has 5-megapixels and an LED flash, while the video call lens above the screen has 1.3-megapixels, plus there is 8GB of internal storage space, 1GB of RAM and a microSD card slot. Like the AT&T phone, this version of the Express can connect to 4G LTE networks and other features include NFC, GPS, Bluetooth 4.0, Wi-Fi Direct and a large capacity 2000mAh battery.

Google Android 4.1 Jelly Bean is installed, however Samsung doesn’t list any of its software features such as S Voice, Smart Stay or Pop-up Play in its press release. The company has been adding these features to most of its Galaxy devices running Jelly Bean, so there’s a chance they’re present here and just not mentioned in the press release.

The Galaxy Express joins the Xcover 2 in Samsung’s growing list of mid-range Android smartphones announced before Mobile World Congress; however like the Xcover, we’re going to have to wait to find out how much the Galaxy Express will cost and when it will go on sale.