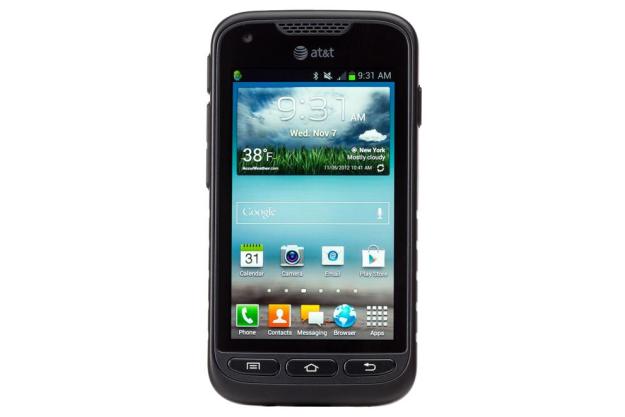 “It’s not a looker, but the Rugby Pro is a durable AT&T phone at a low $100 price. Whether you’re dropping it in water or on concrete, it will boot back up and do its job.”

Even with Gorilla Glass screens and metal shells, smartphones are fragile. Many of us have experienced the horror of dropping our precious device in just the right way, or have gotten caught in the rain without an umbrella, or perhaps fumbled the phone into a … water-filled bowl … or fallen victim to some other reasonable mishap that put it out of commission. But if you’re so accident prone that a case isn’t enough, rugged smartphones like Samsung’s Galaxy Rugby Pro come to the rescue. They’re just not always available at such an affordable price. For just $100 on AT&T with contract, you can scoop up a device that laughs in the face of danger. Just how much can the Rugby Pro take? We subjected it to a few torture tests to find out.

Rugged phones are usually chunkier than comparable devices due to all the extra padding and protection. The Rugby Pro has all the armor you’d expect, but manages a reasonable girth that will please one-handed users. The soft coating on the sides and textured back make the phone less likely to slip from your fingers, and most people will be able to keep fingers firmly wrapped around it while using one thumb. It’s resistant to shock so dropping it won’t be a catastrophe in most cases.

The thick plastic casing creates a seal in all the right places to keep water, debris, and grit from getting inside your phone. All the ports have covers and the Home, Back, and Menu keys under the display are clicky, not haptic touch buttons. A lock on the back plate keeps the user-accessible battery from popping out after a drop.

In addition to the normal buttons, Samsung included a customizable button on the left that can launch apps. We’re not sure why phone companies keep including this type of button as there seems to be little practical use and it can sometimes get in the way when trying to press Power or Volume. But it’s here. Feel free to use it.

Given that this phone is high on protection from damage yet low on price, there are bound to be compromises; the screen is one. The 4-inch display’s low 800 x 480 pixel resolution and less than brilliant brightness take the phone down a notch. Between the pixel density and the Pentile layer, which creates a tiny grid of black subpixels, text isn’t as crisp as we’d like, nor are images and video. Still, the viewing angles are wide and the screen is scratch resistant.

How rugged is rugged?

According to Samsung, the Rugby Pro meets U.S. Mil-STD 810F specifications for withstanding water, humidity, dust, and shock. The phone won’t likely find itself in too many military situations, so we tested it under more mundane conditions. We dropped the Rugby Pro in three feet of water and left it there for 25 minutes (Samsung says the max is 30); it came out just fine and inspection of the back revealed no water near the battery or sensitive connectors.

The anti-scratch screen withstood purposeful keying and sharing a pocket with keys. We are concerned that the display is flush with the edge of the phone, making it more prone to cracks if it lands face-down.

The Rugby Pro runs on Android 4.0 Ice Cream Sandwich with Samsung’s familiar TouchWiz user interface skin on top. It’s disappointing that the phone is running now two major versions behind the latest Android and there’s no word from Samsung that it will get an update to Jelly Bean. TouchWiz smooths over some of Android’s rough edges but has a toy-like aesthetic we’re not fond of.

Software features are what we expect from a Galaxy phone: Lock screen apps, S Beam/NFC, AllShare for streaming media and data to compatible devices, the Siri-esque S Voice, plus a few motion controls. Samsung also pushes the Rugby’s enterprise-level features like MDM for IT managers, encryption, and VPN, which makes sense for a phone that will appeal to people who do work in the field.

There are only a few extra pre-loaded apps from Samsung: Media Hub, Kindle, Qik Lite video calling, and S Memo. AT&T’s suite of apps seems to grow with every passing month; there are eight on the Rugby, including AT&T Messages unified inbox, Live TV, and Code Scanner. Many of these are stub apps (not fully installed) so they don’t take up too much of the limited internal storage.

The 5-megapixel camera on the Rugby Pro’s rear is workable, just nothing special. Samsung’s camera app helps by providing a generous number of options and Scenes. Indoor shots only came out well in really good light; otherwise they lacked crispness and focus. Night mode is hardly worth turning on.

The camera’s slow shutter doesn’t help; it took at least a second to snap a picture after we tapped the button. Outdoor images are decent, though they still lack crispness – same with 720p video.

Inside, the Galaxy Rugby Pro runs on a 1.5GHz dual-core Qualcomm processor, 1GB of RAM, and 8GB of internal memory (5GB available to users, along with an SD card slot). Given the relatively low demand of the display, we weren’t surprised that this hardware scored over 5,000 on the Quadrant benchmark, which is on a par with the Galaxy S3. Very few of the apps in the Google Play Store will give this phone any trouble, and those that might (games, mostly) won’t look great running on the display, anyway. During our hands-on time the Rugby stayed speedy and smooth, especially when it came to downloads.

Given that this phone is high on protection from damage yet low on price, there are bound to be compromises.

On AT&T’s LTE network we saw speeds of up to 25.5Mbps on the download and 10.1Mbps up when we had full bars. However, when coming out of a no service area – tunnels or dead zones – the Rugby took longer than average to connect to the network again. Call quality is surprisingly good for a low-cost phone. Whether we called other smartphone or landlines, callers reported hearing us clearly and only a bit of background noise when we were on a busy street. Voices come through equally clearly via the earpiece and loud enough on speaker to hear in mostly quiet environments.

The 1850mAh battery is big enough to handle this hardware and lasted over 12 hours with medium to heavy usage. With the brightness on Auto we talked on the phone, surfed, updated social networks, watched video, and played music all day on 4G LTE and only drained the battery to 5 percent at the very end of it.

The $100 Samsung Galaxy Rugby Pro is a capable rugged smartphone for a low price. It may catch the eye of people who need a device that can withstand some rough and tumble conditions. And if you’re on the clumsy side and keep dropping and breaking your phone, this one will likely last you for two years, at least.

It could also make a great first smartphone for kids. It’s not too expensive and can survive carelessness. Plus, Android is far easier for parents to control and keep tabs on. The low-res screen isn’t going to bother kids as much and the performance is good enough for the majority of games.

If the rugged aspect isn’t as important as the budget price, the Rugby Pro is a decent choice though not the best for $100. The Pantech Discover and the LG Optimus G have larger, high-res screens and good performance. On the Windows Phone side, the Nokia Lumia 920 and HTC Windows Phone 8X are pretty sweet. None of these could stand up to the same rough treatment as the Rugby, though.