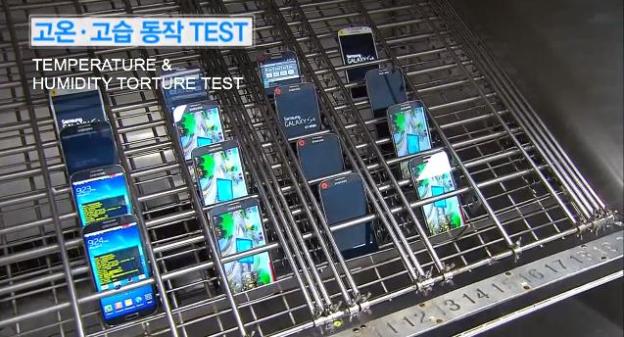 We can compare smartphone specs till the cows come home, but what some of us really want to know is whether the device we’re thinking of handing over a whack of cash for will emerge from the murky waters of a toilet still intact, if it’ll survive an unscheduled meeting with a concrete sidewalk, if it can withstand heat hotter than a Dubai desert, and if it’ll break when you sit on it.

In a video posted to its SamsungTomorrow YouTube channel on Wednesday, the Korean company hopes to answer some of these questions for anyone thinking of buying the latest version of its popular high-end handset.

Taking us inside its comprehensive testing facility, a Samsung engineer puts the tech giant’s flagship device through a variety of punishing tests, all of which it comfortably survives. How about that!

It starts with the rather gentle-looking consecutive drop test, which the S4 comes through completely unscathed.

The slightly more challenging free-fall test, from a greater height than the drop test, is preceded with a short clip of a coffee cup taking the same dive before shattering into hundreds of tiny pieces when it hits the deck. Being made of polycarbonate plastic and not china, the S4 does not shatter into hundreds of tiny pieces, but instead gets up, dusts itself down, and marches over to the next challenge – though not literally, you understand.

The tumble test does what it says on the tin, with the S4 placed inside a rotating contraption to see how it likes being knocked and bumped about. Once again, close-ups reveal no discernible damage to the device. It’s a miracle.

The impact test looks like it could be trouble, with a terrified-looking nut shown to virtually explode as it fails to take the pressure placed upon it by a hefty looking weight. However, you can almost hear the S4 laughing as it’s put carefully in position and, you guessed it, it passes with flying colors.

The sink test sees the S4 submerged in water, confirming that when (not if) it slips from your hand straight into the toilet bowl, it’ll still work after you retrieve it.

The intriguingly titled temperature and humidity torture test demonstrates that while both ice and butter melt in high temperatures, the Samsung Galaxy S4 does not.

Wrapping up the three-and-a-half-minute video is a static electricity test, a dust test – presumably in case you vacuum up your smartphone and need to retrieve it – and a saltwater sauna test in case….well, just in case.

Of course, the S4 survives its reliability assessment with all of its bits and pieces fully intact – you weren’t expecting it any other way, were you? However, the video does appear to show just what kind of challenges Samsung puts its devices up against before they come to market.

Oh, and just in case you were thinking of taking a hammer to your S4 or giving it a quick saltwater sauna, the company warns on the video: “Do NOT try this at home.”

Topics
Video-editing app LumaFusion to get a Galaxy Tab S8 launch
Apple vs. Samsung: Who has the best lock screen customization in 2022?
Honor’s exciting Magic Vs has the potential to change foldables in 2023
When is my phone getting Android 13? Google, Samsung, OnePlus, and more
The best Samsung Galaxy S21 Ultra screen protectors
I love the Oura Ring, but I’m increasingly worried about its future
Why GPS is critical to your smartphone — and desperately needs an overhaul
Kindle Black Friday deals just landed – save on Paperwhite and Oasis
Garmin watch Black Friday deals: Forerunner 45 and Vivoactive 4
How to block someone on WhatsApp messenger
Best stylus for tablets and computers: Top pens for note-takers and artists
Should you buy an iPad on Black Friday or wait for Cyber Monday?
Should you buy a phone on Black Friday or wait for Cyber Monday?