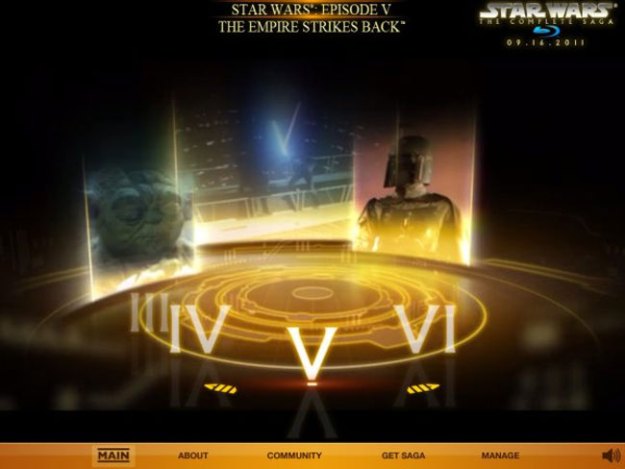 The Star Wars: The Complete Saga Blu-ray collection won’t hit shelves until September 16, but you’ll be able to get an early look at some of the footage and bonus materials contained on the discs via a new iPad and iPhone app available this week.

Launching just in time for Comic-Con, Star Wars Blu-ray: Early Access App hits iTunes Wednesday, July 20, as a free download. The app will also be on display in San Diego this weekend, with even more footage available for anyone who wants to give it an up-close inspection at Booth #3528.

While it’s nothing new to see tie-in apps for Blu-ray movie releases, it’s worth noting that the Early Access app is launching months ahead of the much-anticipated collection arriving on shelves. Could it be a sign of things to come?

Just in case you haven’t been following along at home, we’ve been tracking the progress of the Star Wars Blu-ray collection since it was announced earlier this year. Along with offering fans the opportunity to pick up all six films on Blu-ray in various configurations, the collection also features more than 40 hours of bonus footage, including the requisite concept art, interviews, and behind-the-scenes material.

Here’s the full text of the announcement:

Before STAR WARS: THE COMPLETE SAGA hits shelves on September 16, fans can get a sneak peak at the 40+ hours of bonus footage on the Blu-ray collection through the Star Wars Blu-ray: Early Access App. The App, available for all iDevices including the iPad and iPhone will highlight a sampling of bonus materials featured in the Blu-ray collection, including never-before-seen content sourced from the Lucasfilm Archives such as matte paintings and concept art; prop, maquette and costume turnarounds; supplementary interviews with cast and crew; and more.

The Star Wars Blu-ray: Early Access App will be available for free download at the iTunes store on JULY 20th.

For fans lucky enough to score a ticket to Comic-Con, stop by booth #3528 to check out the App and get an even bigger sneak peek at the Blu-ray Disc and experience one of the Saga’s most iconic moments from a unique, in-universe vantage point!