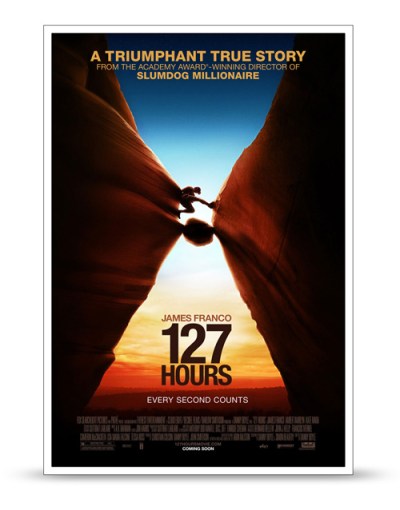 Ok, spoiler — the scene in 127 Hours where Ralston (played by James Franco) cuts off his own arm is disturbing. If you are hoping it won’t be, then this is not the movie for you. But Danny Boyle does something that is simply remarkable with 127 Hours: He makes you understand the emotions leading up to it, and despite the horror of the situation, 127 Hours becomes a film about unbelievable triumph.

Going in to the movie, I wasn’t sure what to expect. I am not a huge fan of amputation (not that there is a pro-amputation lobby or anything), but I wasn’t sure how they could make a movie with a single location be worth a whole hour. I was sure Danny Boyle would be able to pull off something, I just wasn’t sure how he would do it, and whether or not it would be something I wanted to see. After watching 127 Hours, I not only left with a deeper respect for Boyle, Franco, and Aron Ralston, but I am convinced I watched another contender for movie of the year.

If you owned a TV or read a newspaper in 2003, you know the story

In 2003, while hiking alone in Blue John Canyon near Moab, Utah, Aron Ralston was hiking through a narrow ravine when a boulder dislodged and pinned his right hand against a rock wall. Ralston had entered the canyon without telling anyone where he would be going, which essentially meant that he was a dead man. Over the next five days, Ralston was forced to endure extreme physical and mental tortures as he tried to chip away at the boulder with his only tool, a cheap unitool with a dull blade. He soon ran out of water and resorted to drinking his urine, then as delirium began to set in, Ralston began to prepare for his own death, carving his name and what he assumed would be his date of death, then with his video camera he began to record goodbyes to his family and friends.

Ralston had attempted everything he could. As an engineer, he tried to create a series of levers and pulleys to move the rock to no avail, he tried wedging the rock, and he even tried to cut his arm off with the knife on the unitool, but found the blade could barely cut the skin.

Then as death seemed to be inevitable, his food and water gone and hallucinations becoming common, he decided he had nothing left to lose. His hand had been trapped for five days, and it was beginning to atrophy, so Ralston did the only thing he could think to and levered his arm until he broke both the bones in his forearm. Using only the unitool, he began cut through the soft tissue with the dull blade, using the pliers on the tougher tendons.

The process was long and excruciating, especially when he reached the nerves. Then, with the last piece of tendon cut, Ralston simply fell away from his trapped limb and was free- at least free from the rock. Once he could move again, Ralston faced a descent down a straight cliff face of over 100-feet, followed by an eight-mile hike through the Utah desert under the brutal sun, where if he was lucky he would reach his truck, which happened to be a stick shift.

When a group of tourists stumbles upon him, Ralston was delirious and dehydrated, but bewildered to find himself alive. He was then taken to a hospital, where he eventually went on to become something of a national hero and a symbol of the human spirit.

While this might seem like a lot of spoilers, odds are you know Ralston’s story, even if you never knew his name. If you ask people if they know Aron Ralston, most will likely shake their head no. The name might seem familiar, but probably won’t resonate with many. If you tell them he is the hiker that cut off his own arm, you will almost certainly see the spark of recognition reach them. It is a story that sticks with you.

When the real event happened in 2003, it became more than national news, it reached almost every corner of the globe. It raised the question in people: Would you be able to do it? When trapped in an impossible set of circumstances, could you do the unthinkable?

Boyle has claimed that he has been trying to film the events of Ralston’s life for years, and now that he had the chance, he nails it. 127 Hours is one of the most emotionally charged movies of the last several years. Although the majority of the film is spent in a single location, you never question the scope of the film or grow bored by the buildup to the inevitable moment you know is coming. Instead the film teases you through flashbacks and Ralston’s hallucinations. 127 Hours is a work of art. You know what is going to happen, and the film does a spectacular job of letting you feel the emotions that led to arguably the most intense decision you will ever see a person make.

There is just something about winning an Oscar that seems to change directors. It might simply be the validation that the things they have been doing work, or maybe it is the sense that they can freely experiment after having hit the pinnacle of their industry. With Boyle, 127 Hours uses every tool available to it, from the music, to the sound effects, to the visual tricks. The story is told through the flashbacks and monologues, but the emotion is told through the visual scenes and haunting sounds. You feel the coming dehydration in Ralston as the images of water become more and more fleeting, and the camera tricks begin to simulate the claustrophobia in a disturbing way for the audience.

It is somewhat difficult to describe all the visual tricks, because most of them are so subtle and nuanced. The film messes with your head, and in doing so you begin to feel a shade of what Ralston felt. No one can ever truly feel what he felt, but the movie does as good a job as any film could possibly do at making you feel the level of isolation and desperation that he must have experienced.

The sounds used in the movie are also prominent, especially one at the end Boyle uses to highlight a particular moment of pain Ralston subjects himself to. It is jarring, and it cannot help but elicit an emotion from the audience.

If Boyle had told this movie in a more straightforward fashion, simply focusing on the plot and leaving the audio and visual alone, it would have been an interesting story, but an unspectacular movie. After all, the protagonist spends the majority of his time trapped in a narrow canyon with very little light, and only a sliver of sky above him. But with Boyle behind the lens, 127 Hours is one of the most compelling and at the same time gut-wrenching films that you will ever leave and still feel good about. After all the tragedy, there is a fantastic sense of triumph at the end, highlighted in a unique way that just proves that Ralston’s life is not over– in fact it may have just begun.

While a handful of people make up the cast that haunt Ralston’s flashbacks and event surrounding the accident, 127 Hours rests on the shoulders of James Franco. Boyle took the movie and made it arguably a masterpiece, but without Franco’s subtle and compelling performance, the film would have been far less interesting. It would have been easy for the actor playing Ralston to attempt to portray him as angry at the situation — possibly frantic and nearly insane with fear and delirium. The Academy loves that kind of stuff — to see a person emote such obvious emotions — but Franco portrays Ralston as more level-headed. It is probably more true to life, based on the interviews Ralston has given, but whether true or not, the mounting desperation of Franco’s performance adds so many layers to the film that despite the emotional toll this movie may take on some, it is worth repeated viewings.

Franco has shown that he has talent by playing against character several times, but he reaches new levels of acting depths under Boyle’s watchful eye. If Franco can build on the performance in 127 Hours, he could be one of the best actors of his generation. That might seem like a stretch, and he is not there yet, but after watching 127 Hours, he shows a range that many could not reach. The entire movie is essentially him in a tiny and bland looking canyon, and he helps to humanize a story that most have naturally idealized — and with good reason.

On paper, if you downplay the amputation, you simply have a single person trapped in a ravine for 105 minutes of screen time. It doesn’t sound like much of a film.  But add in the talented James Franco in a true story about one of the most incredible feats of determination in recent memory, then add one of the best living directors working today, and you have a story that should be in the discussion for Oscars.

127 Hours does what most films aspire to, but few manage to achieve- it manages to illicit real emotions from the audience. You will watch in horror as the events unfold, and feel Ralston’s despair — then you will cringe when the inevitable happens. After that, you will see that the horrors were only the end of one amazing chapter in the life of Ralston, who has since gone on to do some amazing things, including climbing all 59 mountain peaks that reach above 14,000 feet in Colorado. In the winter. By himself. He also completed the Leadville Trail 100- one of the toughest ultramarathons in the world- climbed Mt. Kilimanjaro, and is now married with a child.

After watching 127 Hours, most people will leave the theater as fans of Ralston; you will want to see him succeed in life. Few people have gone through more and still survived, and in 127 Hours you experience just a hint of what he went through. It is an amazing piece of filmmaking, and easily one of the best movies of the year.