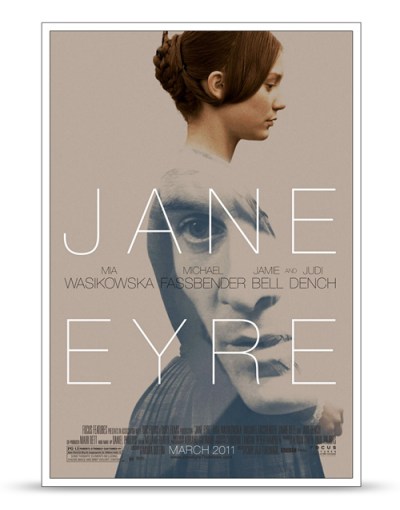 Charlotte Bronte’s original 1847 novel Jane Eyre is not exactly what you might call an uplifting story. While not quite as bleak as her sister Emily’s work, Wuthering Heights, it is still not a story filled with happy people. It does not have the fun or whimsy that Jane Austen’s works did, nor does it have the social undertones of books by authors like Charles Dickens. Yet it remains in the pantheon of classic British novels, and considered so for good reason.

The cinematic adaptation of Jane Eyre manages to take what was a fairly bleak book with a dark view of the world, and bring it to life. The character of Jane is a woman stuck in her own head due to the constant lessons she has been forced to endure, which push her real personality down.  Only when the wealthy and powerful Edward Rochester sees through her self-imposed walls and brings Jane’s true personality out does the character — and through her the story — come to life.

It is not an easy thing to make an entire film with characters who are repressed, and yet Director Cary Fukunaga (Sin Nombre) in just his second film, manages to do just that. There is a passion to the film that other versions lack, and one that many readers may not be immediately aware of when reading the original novel. To bring that to screen is a fairly impressive feat, and it helps mark this version of Jane Eyre as one that is arguably the best of the more than a dozen other adaptations.

Jane Eyre isn’t a story that will have the appeal that the most recent remake of Pride and Prejudice with Keira Knightley had, nor will it likely have the box office success that the Christmas Carol receives when Hollywood is bored and inevitably remakes it again and again. (The latest version, an animated telling starring Jim Carrey, took over $318 million worldwide). No, Jane Eyre will not receive the attention that many other classic novels-turned Hollywood properties might, but that doesn’t make it any less worth watching, and thanks to solid directing, a faithful and well adapted screenplay, and top shelf acting, it is better than most that have come before it. When you have Dame Judi Dench in what is essentially a minor supporting role, you are doing alright.

The story of the titular character begins with a grown Jane (Mia Wasikowska) running from a stately manor, and nearly dying on the steps of a remote house. She is taken in and cared for by the Rivers family, led by St. John Rivers (Jamie Bell), and his sisters Diana (Holliday Grainger) and Mary (Tamzin Merchant), who nurse her back to health and eventually help her find work as a schoolteacher.

As you get to know Jane, the story jumps back to her childhood under the care of her step-aunt, Sarah Reed. Reed and her children do not like Jane, and they treat her horribly. If not for a promise to her dying uncle, Jane would be destitute and living on the streets. But as it is, Reed sends Jane to a charity school, although not before labeling her as a liar.

Things do not go much better for Jane at school, and she is quickly isolated from the rest of the school due to the machinations of the headmaster. The years pass, and Jane grows into the role of governess. She soon leaves the school and takes work at the remote Thornfield Hall, where she is to take charge of the education of the young French girl Adele. Along with the help of Mrs. Fairfax (Judi Dench), Jane makes a home for herself and finds a modicum of freedom for the first time in her life. She soon meets the master of the house, Edward Rochester (Michael Fassbender), who is intrigued by Jane.

Rochester attempts to lure Jane out of her shell. He succeeds, and discovers an intelligent and creative woman who has been deliberately repressed by years of harsh upbringing. The two soon fall in love, and a marriage is in the works, when a secret from Rochester’s youth makes it impossible for them to wed.

Jane leaves Thornfield in tears, and creates a new life under an alias with the help of St. John Rivers. Through a strange twist that puts her back into contact with Reed, she discovers she has an uncle who has left her 20,000 pounds (roughly $2.5 million) following his death. But despite it all, Jane cannot stop thinking about Rochester.

Jane Eyre is not a romantic comedy

If it sounds a bit like a romantic comedy, you would only be half right. The original book was fairly stark, and it lacked humor. It also had deeply moral and religious themes, which are slightly updated for the movie. Rather than a focus on the church, the idea of God is more abstract, which helps to make the movie more timely. The romantic aspects are there, and they are appealing, but also a small part of the overall plot.

While the plot is true to the novel, stars of the film are responsible for bringing it to life. Jane is a quiet character, yet Wasikowska does more with a handful of glances and looks than many can do with pages of dialog. Fassbender also manages to lend depth to Rochester, a character who is defined by the times in the book, and was slightly arrogant and overbearing. Int he movie, Rochester retains those qualities, but they are more understandable and simply add to the personality of the character rather than define it.

If you are a fan of the original novel, then this adaptation should make you very happy. There are a few minor parts removed, but for the most part it not only stays close to the plot, it manages to capture much of the subtext. The film highlights modern sensibilities, but it does so while remaining true to the spirit of the novel.

The look of the film reflects the plot progress, as if it were a character in its own right. As the film starts and Jane is trapped in her own world, the film is bleak. The winter weather is omnipresent, and the drab clothing adorns everyone. As Jane begins to find happiness, that slowly changes as Spring comes to brighten the world. By the end, Jane is stronger than before, and the film takes on a much crisper look.

Themes of repression and overcoming social status remain front and center in this retelling of Jane Eyre, but Fukunaga manages to build on what has come before. Absolute purists may take issue with some of the shift in emphasis and softening of some of the characters like Rochester, but most won’t mind, and many will applaud the direction that the adaptation takes.

Of course, not everyone was forced to read the original book in high school, and the number of readers in the world continues to dwindle, so to many, this version of Jane Eyre will be their first experience with the property. At first glance, the film is bleak and depressing, but that gradually changes as the character of Jane changes. It is a subtle shift, but it is one that Wasikowska handles expertly thanks to the strong cast around her, and the artful direction of Fukunaga, who takes a difficult and lengthy property and manages to cut right to the heart of it. Fassbender is already a rising star, and Wasikowska made headlines thanks to her role in Alice in Wonderland. Both are destined for success, but the real name to take from this film is Fukunaga, who might one day become a household name, or at least a name familiar to awards circles.

Jane Eyre won’t appeal to everyone, but it is hard to fault the film for what it presents. Not everyone will enjoy the bleakness that begins the life of Jane, but from a technical standpoint, the movie is a success. Charlotte Bronte would be proud, and so will fans of the book.