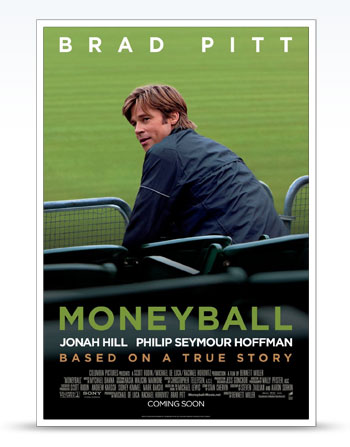 Baseball is boring. There, I said it, and I’m not sorry at all. In fact it feels liberating to admit that. The game is too long and more than 160 games in a season is ridiculous. And I am far from alone in thinking that. Maybe attention spans have shortened since the glory days of the American pastime. Maybe there is just more to do now. In either case, I mention all that as a roundabout form of congratulations to the people behind Moneyball, who managed to make me yearn to go see a baseball game.

Moneyball is not a particularly challenging movie. The characters face some real drama, but it is more about losing a job or career than losing their lives or anything like that. It is about a guy trying to change baseball, and about how a team with a small payroll can compete against the biggest wallets in the country by being smarter than them. Yet it still manages to make you somewhat invested in the successes and failures of the main character of Billy Beane.

It won’t make you question what life is all about or what’s truly important to you, but Moneyball is an exceedingly well made film that takes a familiar subject and looks at it from an entirely different angle than you may be used to. There haven’t really been too many movies about sports told from the business side of things–which isn’t all that surprising when you think about it, because the sports action is usually far more interesting than the behind-the-scenes negotiating and maneuvering. Moneyball is an exception, and its originality alone is worth the price of a ticket, especially compared to the flood of remakes and sequels we have seen this year. It’s also just an entertaining movie in its own right, filled with well-acted characters, interesting dialog and a team you can root for. As long as you don’t look too deeply into the factual side of things, you are left with one of the best true stories to hit the theaters this year.

Over the last decade, the name Billy Beane has become forever intertwined with baseball. His strategy has changed the way baseball teams are formed, and his name has become synonymous with low-budget, high-production baseball teams. But it wasn’t always that way.

In 2001, the Oakland A’s were one win away from heading to the American League Championship Series. With a roster stacked full of current and soon-to-be all-stars, the team lost a heartbreaking deciding game against the Yankees, then proceeded to lose its best players to big-dollar free-agency deals. The problem was simply that a team like Oakland with combined player salaries of just over $40 million, could not keep up with a team like the Yankees that could easily spend $125 million on salaries without missing a beat.

Oakland general manager and former ballplayer Billy Beane (Brad Pitt) knew this, and so he needed a new way to field a team that essentially bypassed paying big dollars for big names. After a chance meeting in Cleveland with unassuming assistant Peter Brand (Jonah Hill), Beane decides to try a new strategy for fielding a team, which was based primarily on combining the right statistics to fill certain needs. For example, using Brand’s affinity for stats, he projected the number of games needed to win in order to reach the playoffs, then used an equation to determine the numbers of runs they would need to score to win. With that number in mind, he then proceeded to recruit some of the unlikeliest players ever to play on a team together.

His manager Art Howe (played by Phillip Seymour Hoffman) didn’t like it, many of his advisors quit, and his job was beginning to look less and less secure, even though the A’s upper management (represented through an uncredited cameo by Bobby Kotick, the CEO of Activision Blizzard) liked that the payroll was kept low.

And yet Beane went all in and refused to give up on his new strategy. Then something unexpected happened: They began to win.

Fact versus a good movie

The story of Moneyball is based on the best-selling book by Michael Lewis, which was written after Lewis took an in-depth look at the team and Beane’s philosophy as it played out through the 2002 MLB season. The film uses that book as a springboard, then chucks about a third of it away in favor of a more appealing film. Most of the big events are true, but there are some major changes committed in the name of Hollywood. For example, the character of Peter Brand is fictional. He was loosely based on assistant general manager Paul DePodesta, but the character of Brand is used as a tool to introduce a complex (and potentially very dull) philosophy based entirely around stats. It wouldn’t have exactly been a sexy movie if half of it was spent explaining the hitting percentage versus slugging percentage.

The script from Steve Zaillian and Aaron Sorkin also sometimes chooses convenience over realism, but that is to be expected. Unless you are already familiar with the events of the Moneyball book, then the changes will fly past you and the few real events you may remember will stand as anchors to fix the film in reality. Even if you have read the book, assuming you can get past the stretching of the phrase “based on a true story,” the plot has enough truth to keep you entertained.

The plot occasionally pulls on the heartstrings and sometimes comes off as a bit too easy and cliché, but despite that — or maybe even partly because of that — it is an engrossing and entertaining look at the other side of baseball, and specifically one man’s pursuit of personal redemption. It is a story about a guy going against more than 100 years of tradition and overcoming adversity; its a man-against-all-odds story, regardless of the setting. Throw in some sports, and even if it feels a bit like an emotional setup, it’s hard not to buy into the story. And a good chunk of that is due to Brad Pitt.

Swinging for the Oscar

When Pitt first began his meteoric rise towards a position just short of godhood, I was not a fan. He was a pretty boy with a surfer’s delivery of lines that took few risks and usually stood around just looking dreamy. Then he started taking on weirder and quirkier roles that I attributed to Pitt having a great agent. But over the last few years my opinion has changed, and the me of a decade ago would be shocked to hear the present me admit that Pitt is one of the best actors working today.

He still has his comfort zone, but he plays it well. Watching his performance in Tree of Life and then Moneyball, it is almost as if there were two of him. Actors like Sean Penn can dig deep and convey incredible emotions, but Penn is typically cast in darker roles because of it. Pitt on the other hand, has the ability to take on different personas. The role of Beane isn’t a huge stretch for him — he plays a likable and charismatic guy — but it is one that will win him enough good feelings and public support, that when coupled with the body of his work, may land him another Oscar nomination. He has had better roles in terms of the craft, but his turn as Beane is layered and fun enough to watch, that it could win any doubters over.

Pitt is helped by an overall strong cast, including Hill as the fish-out-of-water who becomes Beane’s protégé Brand, and Hoffman’s skeptical and resistant portrayal of manager Art Howe. Chris Pratt’s turn as Scott Hatteberg is also notable, and Stephen Bishop as David Justice takes a small role and turns it into a crucial one. There really aren’t any weak links in this film, with the possible exception of Kerris Dorsey as Billy’s young daughter Casey, but that has far more to do with the script which casts her as the one-dimensional emotional prop that stares lovingly at her dad while asking poignant questions about if he is worried and if he may lose his job. It is a bit manipulative, and a plot contrivance to explain the personal toll, but it is a very minor complaint.

Directed by Bennett Miller (Capote, The Cruise), the film avoids going too far towards the over-the-top heroism and drama that you might expect from a movie like this. Miller reigns the cast in just enough that it makes them all shine.

When done well, sports movies are an easy win at the box office. Taking movies and sports and combining them on film, is like adding chocolate and peanut butter then wrapping it in money. Sports heroes are easy heroes to root for. Political and religious figures bring in too much ideology — sports figures can appeal to a far broader audience, for better or worse.

It is an easy thing to root for a sports-based hero. And when that hero is portrayed by Brad Pitt, that makes it even easier for most audiences to buy into. Miller tones the film down and avoids the obvious pitfalls, while still allowing the film to feel familiar in a good way. He romanticizes baseball without glamorizing it. Baseball is the driving force of the film, but it is not the primary focus, and that makes it an exceptionally good sports film.

Moneyball is a crowd pleaser that goes just a bit beyond the traditional saccharine underdog sports flicks, which means that it will soon find its way into Oscar consideration. It may be a bit too tame to win much gold, but it deserves a place in the conversation.