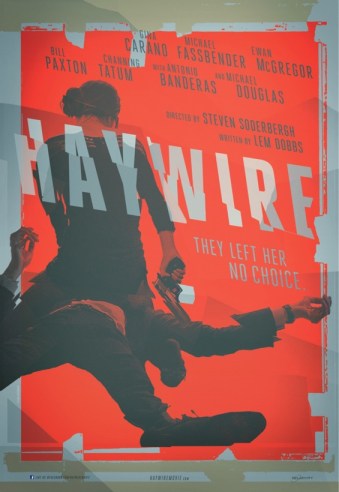 Over the past two decades, Oscar-winning director Steven Soderbergh has become one of the most sought after and highly respected filmmakers working in the industry today. So when he puts out a casting call, the results are fairly impressive. In his next film Haywire, the plot will be familiar (which is a nice way of saying that it will be unoriginal), but an all-star cast paired with Soderbergh’s style should make Haywire into a highly anticipated film.

Haywire is the story of a spy played by MMA fighter Gina Carano. If we stopped right there, you could probably guess what the film was about. Take an actor or actress that is known for action, and have them play a spy. Inevitably a betrayal, an attempt on the spy’s life, and bloody payback follow in short in order.

This marks the fourth movie Carano will appear in, but the first time that she will be the lead in it. Helping her along will be Antonio Banderas, Michael Douglas, Bill Paxton, Ewan McGregor, Michael Fassbender and Channing Tatum.

The first trailer was released last week at Comic-Con, which you can see below.  Haywire will have its debut in Ireland where it was primarily filmed, on August 5, but it won’t hit most theaters until January 20, 2012.