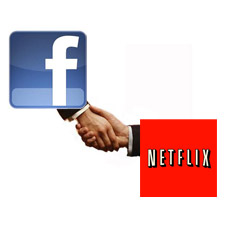 It’s no secret that there’s something brewing between Netflix and Facebook. The subscription media service’s CEO Reid Hastings joined Facebook’s board just last month amid rumors of an impending Netflix integration, and a new multimedia dashboard for the site. Combine that with Netflix’s social networking aspirations and Facebook’s less than subtle comments about working with industry heavyweights to integrate new features into the site, and we can all see where things are headed. Or rather, would be heading.

According to Netflix’s second quarter briefing to investors, Facebook integration–which shares what you’re watching with your friends–will launch this year for Canadian and South American users only because of US privacy regulations. The Video Privacy Protection Act prevents a company from making someone’s viewing habits public without his or her written and exclusive permission.

The bill became law 1988 back when people actually rented movies from brick-and-mortar stores, when a Supreme Court nominee’s rentals were published in a newspaper–it is obviously an important privacy protection. It prevents stores from holding onto your rental history for more than year, or police from obtaining that information without a warrant or court order. There used to exist some confusion as to whether the Video Privacy Protection Act extended to DVD and video game rentals, but the 2010 decision in the Lane v. Facebook, Inc case found it did.

Lane v. Facebook was a lawsuit filed in response to the Facebook Beacon program, which published user information with permissions. Included in this were Blockbuster as well as Gamefly rental history, which provided personally identifiable information to Facebook that they were not authorized to. The Beacon program was shut down in 2009 and Facebook created a multimillion dollar fund to protect user privacy.

Thankfully for the future of an effective Netflix-Facebook partnership in the US, there might be a loophole. A new bill has been introduced and if it passes, Netflix rental information could be broadcast on Facebook as long as users were given clear chances to opt-out. “A bipartisan group of lawmakers has introduced a simple clarification, HR2471, which says when and how a user can give such permission. We’re hoping HR2471 passes, enabling us to offer our Facebook integration to our US subscribers who desire it,” Netflix explains.

While it’s now clear that sharing your Netflix activity via Facebook is likely on the horizon, we’re more curious about a fully-featured Netflix client integrated into the site. The Skype chat client Facebook introduced last month was a necessary and helpful update, although somewhat overhyped. Now we’re just twiddling our thumbs in anticipation of Spotify and Netflix applications packaged into the site.

Eight charged with running illegal streaming sites Jetflicks and iStreamItAll
FCC officially repeals 2015 Net Neutrality regulations by a narrow margin
Thumbs up or down? The way you use Netflix just got overhauled
Fandango is selling movie tickets on Facebook in a bid to target millennials
Everything we know about Ant-Man and the Wasp: Quantumania so far
Most powerful Star Wars villains ever, ranked
Paramount+ launches Peak Screaming collection for Halloween
Everything Everywhere All at Once’s Larkin Seiple on the feel-good movie of 2022
Meet Cute review: Peacock’s time travel rom-com falls flat
Heardle today, September 23: Answer, hints and help for song of the day (Friday)
Framed today, September 23: Answer and hints for the movie of the day (Friday)
The best Roku TVs of 2022: which should you buy?
Don’t Worry Darling review: through the suburban looking glass