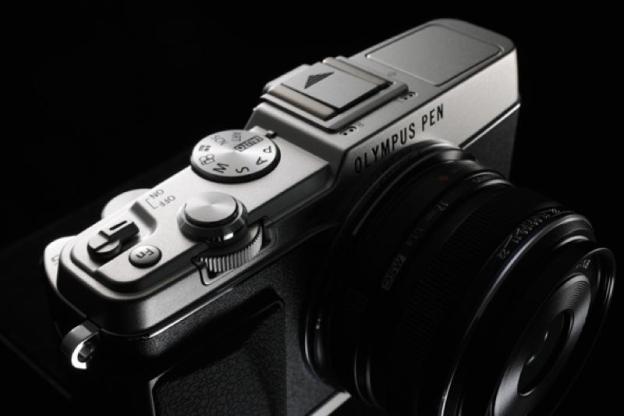 Check out our review of the Olympus PEN E-P5 digital camera.

You can give Olympus credit for helping to start the retro craze that’s taken over camera design lately. The current PEN and OM-D Micro Four Thirds mirrorless models draw inspiration from the company’s film cameras of the 1960s and 1970s with metal bodies and textured grips. For the new PEN E-P5, Olympus dug through its design archives even deeper by creating a beautiful, classic-looking camera that resembles the Olympus PEN F of the 1960s, down to the logo etched on the front. A fitting tribute, since the new camera launch coincides with the PEN F’s 50th anniversary. But as Olympus points out, looks can be deceiving, since it designed the E-P5 to be one of the most powerful compact system cameras (CSC) available today, not just a good-looking one.

When Olympus was designing a successor to the E-P3, they wanted the E-P5 to marry the premium design of a CSC with the high performance of an SLR, plus wireless connectivity. (If you are wondering why they skipped over the E-P4 designation, it’s because the number “4” is considered bad luck in Japanese culture.) This flagship PEN model borrows many of the features from its top-of-the-line Micro Four Thirds OM-D cousin, the E-M5: a 16-megapixel TruePic VI Live MOS sensor, five-axis image stabilization, and FAST autofocusing system.

But the E-P5 isn’t just a technical duplicate of the E-M5. It’s the first CSC to use a mechanical shutter to attain a speed of 1/8000th of a second, placing it alongside DSLRs like Nikon’s D4, D800, and D7100. With that speed you can capture fast-moving objects or create tremendous background blurring when using a fast aperture lens. The E-P5 has a fast start-up time (0.5 seconds with the Quick Start-Up function on, 1 second if off), and the new short-release time lag AF mode reduces shutter lag to 0.044 seconds. Burst mode is at up to 9 frames per second, while Olympus has enhanced the built-in flash with a 1/320th of a second synch speed – ideal for daytime backlit shots. The E-P5 can shoot video at up to 1920 x 1080 at 30p (MOV format).

A feature of the autofocusing system is Super Spot AF, which lets you focus in on a tiny part of a subject more precisely through a magnification system. Olympus says this is more precise than phase-difference AF systems. Overall, the autofocusing system is 20 percent faster than the E-P3, calling it one of the world’s fastest. There’s also a new focus peaking feature that improves manual focusing. The five-axis image stabilization can compensate camera shaking for both stills and videos. While it’s the same system found in the E-M5, Olympus has made it smaller to fit inside the smaller PEN body. You can use the LCD to check stabilization by pressing the shutter button halfway. An IS-AUTO mode automatically compensates camera movement when panning.

The design of the E-P5 is certainly eye-catching, much like the latest Fujifilm X-series cameras. It has the look of a high-end handcrafted product. The E-P5 has an all-metal body construction with a metal processing finish that Olympus says gives it a more luxurious feel. Construction is seamless, as there are no visible screws. Even dials and buttons are made of metal, and are laid out in way that’s easily accessible.

The body may look retro but there are plenty of modern-day buttons and dials to be found. The 2×2 Dial Control system, consisting of a dial on the front and one on the back, is designed to give advanced photographers a way to quickly adjust settings. You can use the front dial to adjust aperture and the back for exposure time, or use the front dial to set ISO (200 to 25,600) and the back for white balance; to pick one or the other, simply flip a lever on the back. You can also customize it and the F button by assigning other functions. On the back is a bright 3-inch capacitive-touch LCD that’s rated 1.04 million dots, and can be tilted (80 degrees upward, 50 degrees downward). Most CSCs don’t include a built-in viewfinder, but if you prefer to use one, Olympus has a new optional electronic viewfinder (EVF) – the VF-4 – that slots onto the camera’s hot shoe. The EVF has a 1.48x magnification and 2.35 million-dot LCD, but beware, the new model is not backward compatible. Olympus says the Live View image has a shorten display latency when compared to the E-P3 – 50 percent on the LCD and 30 percent on the EVF.

In addition to the hardware, the E-P5 also has various kitschy features sure to please the modern, social photographer. For example, the multi-photo functionality allows users to snap several pictures and frame them in one Mondrian-style collage. Another feature, Photo Story, can also generate 10-second time lapse movies; all the user has to do is set how long they want the E-P5 to sit out and capture the photos and the camera will automatically calculate how many pictures in an interval. Photo Stories can range between a time lapse of one second to 24 hours, capturing up to 99 photos per story. Last but not least, a slew of photo filters are, of course, almost necessary in this retro photography age.

Olympus acknowledges it’s late to the Wi-Fi game, but it’s finally introducing wireless connectivity, starting with the E-P5. Having studied existing Wi-Fi implementations, Olympus is focusing on easy setup, enhanced search function, and remote operation as key UI improvements. To quickly pair the camera to a smartphone, users can scan a QR code that appears on the camera’s LCD with their phone. Using the Olympus Image Share 2.0 app for iOS or Android, you can use the phone as a viewfinder and operate the camera remotely, including setting a timer. The camera uses a smartphone’s GPS sensor to geotag images, and you can push content from camera to phone. The ability to live share the camera screen allow for flexibility and social usage, and in our test trial with the E-P5 and an iPad during a press preview, as long as your Internet connection’s good, any photo snapped between the device or the Olympus will be capture with minimal lag.

(Natt Garun contributed to this story.)

Olympus brings modern 4K video to a retro design with the PEN E-PL9
Want to shoot like a street photographer? The compact Panasonic GX9 is your tool
Olympus M. Zuiko F1.2 Pro lenses prove there’s life left in Micro Four Thirds
Olympus reveals high-end 17mm and 45mm f/1.2 prime lenses
Netflix sheds light on its ‘approved cameras’ for filmmakers
Best Prime Day Drone Deals 2022: What to expect this week
How to remove the background from an image
Instagram boss says to expect even more video content
6 awesome Earth images captured from the ISS in July
This GoPro Hero 10 bundle is $100 off at Best Buy today
The best iPhone tripods for 2022
Watch this Mavic 3 drone soar above the world’s highest mountain
How to watch DJI unveil an all-new drone today