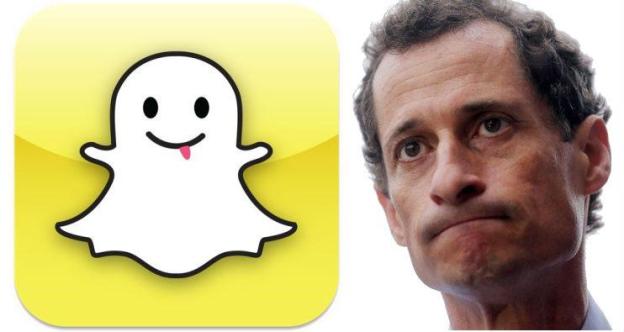 It’s the scandal that won’t die: This week, news broke that New York mayoral candidate and former Congressman Anthony Weiner continued sexually explicit messaging on the Internet up to a year after he was initially disgraced when he was caught doing the same exact damn thing.

In 2011, Weiner became a national joke when he accidentally tweeted provocative pictures of himself, which led to revelations that he’d been sending sexual pictures to many women online, despite the fact that he was a married public servant with a pregnant wife. During this current mayoral run, Weiner distanced himself from that controversy… but failed to mention that his lewd Internet trawling didn’t stop after he’d been made to resign for lewd Internet trawling.

Dick pic me once, shame on you. Dick pic me twice, well … you shouldn’t accidentally do this twice because there are oh-so-many ways to keep this stuff under wraps.

It remains to be seen whether New York voters will get over the fact that Weiner acted contrite and cowed about his creeper behavior when he left office but then kept at it for a full year, or that he used the world’s dorkiest pseudonym, Carlos Danger. Or that he was chatting with a 22-year-old, more than 20 years his junior, after he’d already put his wife, Huma Abedin, through a profoundly humiliating experience.

Even though dirtbaggery should never be condoned, let’s say that Weiner and Abedin do actually have an agreement that he can let his freak flag fly on social media – if that’s the case, it’s high time he learn there are a bevy of ways for him to stop broadcasting all this. Which is why I’m presenting you with a list of apps Weiner could’ve used to make the sending-gross-messages-over-the-Internet-to-young-women-who-he-wasn’t-married-to process a little easier.

OK, yes, there are ways to save Snapchat pictures, and even an outcropping of sites devoted to bad behavior on Snapchat. It’s not hard to imagine Carlos Danger ending up on Snapchat Leaked.

But at least the fact that snaps disappear after a set amount of seconds makes it harder to keep them on file than just regularly sending photos out into the Internet ether. You at least want to make it slightly more difficult to expose your sleazy marital misconduct. And since this latest wrinkle in Weiner’s scandal is based on a woman who he was messaging with for a while deciding to expose his bad behavior, you’d think that Snapchat would have helped Weiner, since the woman in question was initially receptive to his advances and would not have likely spent time saving snaps in case she changed her mind.

Tiger Text would’ve been a much better chatting option for Weiner because it lets you send texts that will automatically delete themselves from the recipients’ inbox (kind of like Snapchat for messages). And if you didn’t put an early enough deletion date, you can “retract” a message at will – that could’ve foiled blackmail plans.

Carlos Danger sounds like the name of an imaginary sex offender created by the DARE program to warn children of the hazards of selling your body for crack. It’s creepy and awful. Carlos Danger manages to be vaguely racist and unbelievably cheesy at the same time. More than the incessant sex messages themselves, Weiner choosing the exact same name Homer Simpson would’ve picked if he was putting on a Lothario persona makes me worry about his ability to lead.

Instead of letting his apparently demented imagination run wild, Weiner could’ve picked a less absurd code name using Pseudonym, an app that generates nom de plumes for writers. The app lets you customize your pseudonym by adjusting settings for name uniqueness, masking your real name, gender, age, and location. They’re supposed to sound like real, non-ridiculous names, so “Carlos Danger” isn’t an option no matter how you configure the settings.

Anthony Weiner needs so much (more) therapy. Zoc Doc makes it easy to make doctor’s appointments, so even when Weiner’s regular therapist isn’t available, he can still find a professional.

To help Weiner stay away from his digital paramours, he could sign up for Ex Lover Blocker, a Portuguese app that helps stop urges to reach out to people you really shouldn’t be reaching out to. If he was serious about stopping his creepy messages, he could set this app up so every time he tried to, say, make arrangements to meet up with a young activist in a Chicago condo, his handlers and his wife would get an alert.

When is the best time to post on Facebook?
You can now downvote comments on TikTok videos
Instagram is building a ‘nudity protection’ tool for your DMs
This beloved TikTok hashtag just got its own app feature
What does a check mark mean on Facebook Messenger?
Twitter’s latest features are all about curbing election misinformation
Snapchat Plus subscribers are getting these four new features today
You can (sort of) generate art like Dall-E with TikTok’s latest filter
You can now use the Add Yours sticker on Reels for Facebook and Instagram
TikTok bans influencers from creating paid political ads
The 10 most popular TikTok accounts
Downloaded YouTube Shorts clips will soon include watermarks
Snap’s Pixy drone flies off into the sunset as it’s reportedly canceled