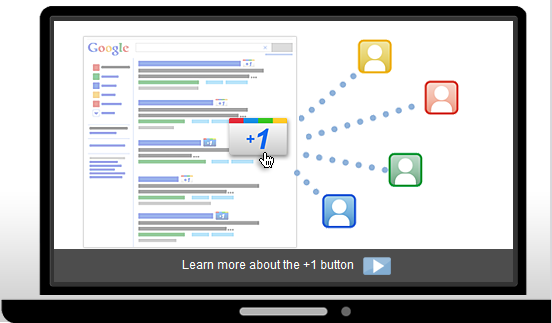 According to TechCrunch, a Google affiliate has confirmed that the site’s +1 feature will begin its official launch tomorrow. PR company New Venture Communications reached out to the publication and more or less stole Google’s thunder: Google was going to give TechCrunch some “big” embargoed news, positioning itself for a decent chunk of press attention tomorrow concerning +1. But New Venture Communications’ broke the story before Google could give it away.

“I understand that Google planned to reach out to you about the new Goolge +1 button for websites that they’ll be unveiling shortly. I thought you might be interested in speaking with Hooman Radfar, CEO of Clearspring [its parent company], about the company’s role as a launch partner for Google +1,” the firm tells TechCrunch. It goes on to reveal that the more something gets “+1’ed,” the more credibility a URL is supposed to hold. Clearspring recently closed a $20 million round of series D fundraising and likely wants a little attention for partnering with Google on the +1 technology, which likely took advantage of Clearspring’s profitable AddThis platform.

We first heard about +1 in December, when a leaked screenshot revealed some sort of social feature that seemed to be based around recommending content via a web application that somehow tied to a user profile. Google Profiles have also gotten a makeover, as part of Google’s very, very incremental go at a social network. The +1 button will also apply to adds, which is one of Google’s approach to getting his hands on user data a la Facebook. In general, though, +1 means that social search is becoming even more important to Google.

And now you can get ready to see a +1 button next to your Google search returns. Using the tool will require you to involve yourself more in Google’s social features as well as steer some focus toward your contact’s profiles. We’ve known this application was coming for awhile and it’s launch isn’t likely to huge news (we’d expect a Google blog post of average length), but we’ll see how Google reacts to losing its grip on the announcement. Now we can just wait for some official word on the +1 Chrome extension Google gave us a glimpse of in its recent commercial.

Google announced +1’s official launch via its blog this afternoon. The +1 button will now begin appearing on a number of partner sites and will roll out for an even larger launch in the future. Google properties like Blogger, YouTube, Android Market, and Product Search are among the early +1’ers, and sites like Best Buy, Mashable, and The Huffington Post also made the initial release. You’ll start seeing the +1 button on their sites, and those interested in getting their own +1 application should visit Google’s designated site for webmasters.

How to post a Short on YouTube
What does the lock mean on Snapchat?
Hive Social is my favorite Twitter alternative, but that’s not saying much
How to delete a BeReal post
What is Mastodon? Here’s why everyone’s talking about this Twitter alternative
Elon Musk reveals date for Twitter Blue relaunch
What is Twitter Blue and is it worth it?
Twitter closes offices as ‘work pledge’ deadline passes
What is Ambient Mode on YouTube?
What is BeReal?
How to use TikTok’s voice changer
Twitter attempts to sort out verification system with new badges
Elon Musk meets Apple’s Tim Cook to settle dispute