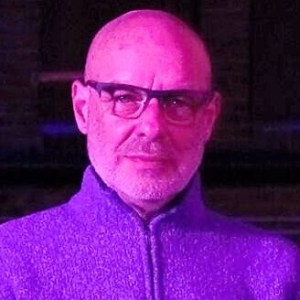 Brian Eno – musician, producer, visual artist, thinker and activist – first came to international prominence as a founding member of Roxy Music, and immediately followed with a series of critically-praised, pioneering and influential solo albums – including the soon-to-be-reissued Discreet Music, Music For Films, Music For Airports and On Land. His visionary production includes albums with David Bowie, Talking Heads, Devo, Laurie Anderson and Coldplay, whilst his long list of collaborations includes recordings with John Cale, David Byrne, Grace Jones and James Blake. Equally notable are his highly-acclaimed visual experiments with light and video, which have been exhibited all over the globe – from the Venice Biennale and the Marble Palace in St. Petersburg to Beijing’s Ritan Park and the sails of the Sydney Opera House.

Eno began collaborating with musician / software designer Peter Chilvers on Will Wright’s computer game Spore. Their shared interest in generative music rapidly lead to the development of a prototype for Bloom in 2008. In the intervening decade, they experimented further with the field, expanding their catalogue of apps with Trope, Scape and Reflection. In that time Chilvers has also acted as an engineer and technical advisor to Eno on a number of other projects. A series of multi-speaker installations around the world laid the groundwork for 2016’s The Ship, and they premiered Bloom: Open Space, a mixed reality installation in Amsterdam in 2018.