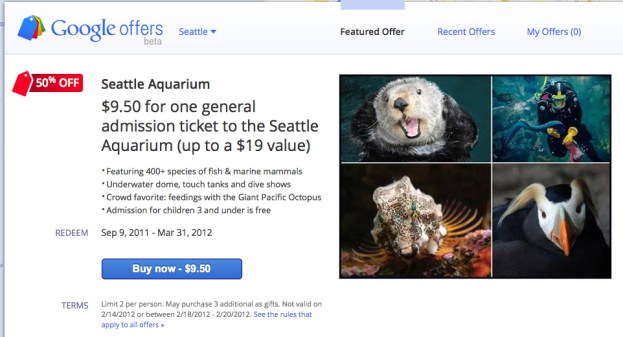 At the end of last month Facebook announced it would be winding down its Deals product after just four months of testing. Then a report a this week suggested that saturation point had been reached with the plethora of daily deal sites, such as Groupon and LivingSocial, still available. But all this hasn’t stopped Google Offers from launching in five new US cities.

In a post on its Commerce Blog this week, the Mountain View company announced that the service, which is still in beta, was being launched in Austin, Boston, DC, Denver and Seattle. This means the service is now available in a total of eight cities, with it already operating in Portland, New York City and San Francisco.

To subscribe, users just need to head along to www.google.com/offers, choose a city and hit the subscribe button (provided you already have a Google account). If you’re an Android user, you can also register via the ‘Today’s Offer’ tab in the Google Shopper 2.0 app.

Wednesday’s offers in the new cities, which will be redeemable Thursday, include:

Google Offers, which launched in June this year, looks like it’s in for the long haul when it comes to the daily deals game, with plans already announced for a roll-out in another 27 cities across the US. Groupon may well be the current leader in the field, but no doubt the Chicago-based company will be concerned about Google Offers’ expansion plans.