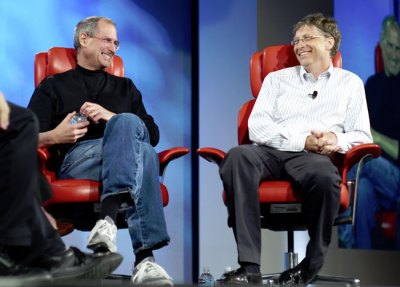 Microsoft, which has been slow in responding to Apple’s advances, was recently taken by surprise as Apple edged past the software giant in market capitalization.

Recently, Apple emerged with a market value of roughly $222 billion compared with Microsoft’s $219 billion. Apple spearheaded into the second highest-valued American company directly behind Exxon Mobile, which was valued at $278.6 billion.

“Microsoft actually had what should have been a more attractive service, retailers liked them better and Microsoft had a more robust product, but Apple out executed them on marketing to an incredible level,” Enderle says. “Oh and Microsoft chose to fight Apple on Apple’s turf by bringing out a hardware device and that is always a really bad idea.”

The Mac vs. Windows campaign directly targeted the Vista launch problems, kept them front of mind even after they were fixed, Enderle claims, adding that Microsoft’s failure to market the improvements drove the positive result for Apple.

“Apple’s marketing program took reports of problems with Microsoft Vista and blew them out of proportion in an attack worthy of a first-tier political campaign,” Enderle says.

The Mac vs. PC campaign ran directly into the Vista launch and is recognized as being one of the most effective of its type. Apple not only helped slow sales for Windows, but Vista also never really recovered while Apple tripled their market share, according to Enderle.

Apple competes hard, likely knows more about many internal programs going on in competitors’ firms than related executives do and has the ability to develop and execute a strategy that is repeatedly successful against these competitive threats, he says.

“The iPod, AppleTV, iPhone and iPad were all big risks and only the AppleTV didn’t meet expectations and they haven’t stopped funding or developing it,” Enderle says. “Microsoft, on the other hand, takes few big risks, tends to under resource those it does and then wonders why these smaller risks are unsuccessful.”

He pointed out Mira was ignored, Origami was unfinished and Windows Media Server was crippled and underfunded as was Media Center, Media Extenders, Portable Media Center, Windows Mobile, Zune and Chrome Effects. And while Microsoft has often come up with ideas first, Apple generally executes better and walks away with the benefits.

Microsoft has increased the complexity of its customer mix and often seems unable to differentiate between the conflicting needs of users, IT shops, retailers, OEMs and government buyers, Enderle says, adding the end result is that the related products have a tendency to miss the needs and expectations of all groups because there is no real focus on any one group and users’ needs and expectations are often in conflict.

“If Microsoft wants to move ahead of Apple again, they have to cease accepting failure as an acceptable outcome and either resource efforts to levels where they can’t fail or recognize that if you aren’t going to play to win, there isn’t much point in taking the field in the first place,” Enderle says.

Separately, he gave the example of how Apple actually torpedoed the HP MP3 player by licensing the iPod to HP and then reneging on all of the promises they had made.

“They underpriced the HP product, wouldn’t let HP use any color but white, and wouldn’t allow transcoding even though they had indicated all of these were possible initially to close the deal and the contract locked HP out of doing their own player until Apple had locked up the market,” Enderle says, adding it was “one of the dumbest things I’ve ever seen HP do and one of the smartest from Apple. If Apple were to do something similar today they’d have anti-trust problems up the wazoo (technical term).”

While Microsoft still leads Apple in sales, there is every likelihood that Apple’s income could surge past Microsoft’s in the next few years.

Apple CEO Steve Jobs took the stage during the company’s Worldwide Developers Conference in early June. Jobs previewed the successor to its smart-phone line, the iPhone 4, which features a faster processor and videoconferencing, which the company calls FaceTime and includes a bigger battery and two cameras. As it continues to deliver its innovations, Apple has become the dominant technology company of this decade.