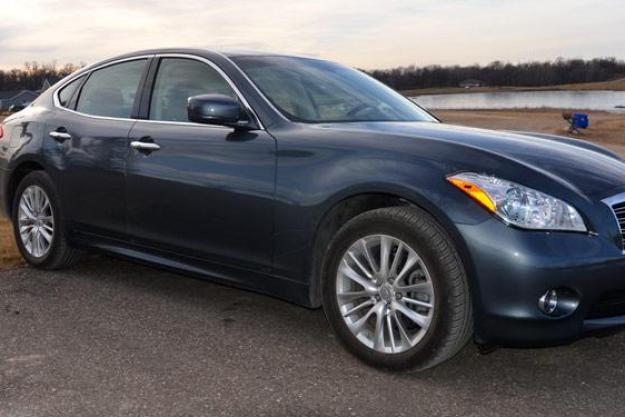 “For those who drive a lot and need V8 power and space, the M56x is the best sedan we’ve driven all year. That said, it can’t touch other luxury cars in terms of acceleration and tech features.”

If you could only use one word to describe the Infiniti M, it might be this: refined.

In the 2012 model, which we tested for a week, there were no improvements to the 420-horsepower V8 engine, no added luxury accoutrements, and no new interior changes. Yet, driving this luxury sedan for the first time (since we did not review the 2011 version) and comparing it against the Infiniti M37x (which we did review last year), there is a sense of refinement in how the car drives. Not quite as punchy as the BMW 5 series, or as tech-laden as the Mercedes-Benz CLS 63, the M56x has more in common with the Audi A7 in that some of the superior craftsmanship starts to reveal itself over time.

For starters, the M56x is not a blisteringly-fast car. In our tests, even in the sport mode, the 0-to-60 acceleration was right around 5 seconds, far off the mark set by the Mercedes-Benz CLS 63 AMG we drove just a few weeks ago. In terms of handling, the M56x does not match the adaptive suspension in the Audi A8.

The exterior look of the M56x hints at being larger than the M37x, the latter of which has a more pronounced bubble shape and a longer wheelbase, but in fact they are the same size. The main takeaway we had from the car is that it provides an exceptionally smooth ride. Gliding over potholes is one thing, but the all-wheel drive felt sure on the road. (We only had one minor spin-out when we tried to get the rear wheels to lose traction.)

The interior is reminiscent of the M37x, but without quite as much of a cocooning feel, mostly because the vehicle is larger. There are similar cockpit controls for changing the drive mode (you can use the normal mode, sports, mode, snow, and eco) and adjusting climate controls and entertainment.

A few times, we reached for the drive mode selector thinking it was the controller for the entertainment system, since that is the staple of a Mercedes or BMW. The Bose surround system was clear and loud, but not nearly as pristine-sounding as the CLS 63 or as loud as the Cadillac CTS.

What this luxury sedan provides is space, an incredibly smooth ride, and power when you need it. There is plenty of room in the back for passengers, even when the front seats are shifted all the way back. Unlike many European luxury sedans, there is room for three passengers to sit comfortably in the back. Cargo space (at 14.9 cubic ft.) is more than adequate – we stuffed in several sports bags and have room to spare. Headroom is a notch better than the C63, which is geared for fast starts and tight handling.

The ride is smooth and refined without being sporty. You don’t feel like you want to race the person next to you, but everyone in the car will get a better nap on a long commute. The 7-speed transmission does a great job channeling power from the 5.6-liter V8, though, and you might not notice it right away for passing or acceleration. The M56x feels more than capable is at higher speeds, when you get anywhere near 80. The vehicle seems to unleash some hidden blast of energy beyond that point.

Infiniti ratcheted back the gee-whiz features on the M56x in favor of engine power and extra passenger space. On the model we tested, which retails for about $65,000 (base price is $57,000), there wasn’t an option for adaptive cruise control (slowing for the car in front of you), lane departure prevention (gently nudging you back into a lane), or even blind spot indicators. The M56x does provide a back-up camera, GPS navigation, heated steering wheel, and a fold-up privacy blind for the rear window.

The M56x has a few more hidden features which also seem less noticeable at first. The car has a standard feature for hill start assist, for those predicaments when you are perched at a stoplight and there’s a car right behind you. The vehicle will hold you in place when you take your foot off the brake. Another perk: The 10-way adjustable seats provide quite a few positions for a better driving view.

Of course, like any top luxury brand, the M56x also uses xenon headlamps that are super-bright for easier nighttime driving, a stability control system, and ABS brakes.

Infiniti offers a tech package for the M56x that has some of the extra tech features like blind sport warning and adaptive cruise control. Of course it will cost you: $3000 for the package.

For mileage, the V8 power wins out over fuel economy. In our tests, we clocked in at about 22 mpg, which is just barely under the rated 23 mpg highway rating, and that was mostly highway driving back and forth to work and just a few miles of city driving. The M56x can dip well below 20 mpg if you tend to drive in start-stop situations. The smooth ride becomes most apparent at highway speeds, as does the smooth shifting of the 7-speed transmission. This is a traveller’s car, not as much intended for urban excitement.

In the end, the Infiniti M56x falls in the same league as other luxury cars we’ve tested recently, including the Audi A7, the BMW 5, and even the Mercedes CLS 63. The ride is arguably smoother. At high speeds, the power under the hood is superior to the BMW 5 for sure, and even gives the A7 something to think about. There’s no contest compared to the C63 – the M56x falters in that upper segment.

For those who drive long hours and need V8 power and space, the M56x is the best sedan we’ve driven all year. That said, it can’t touch other luxury cars in terms of acceleration and tech features.