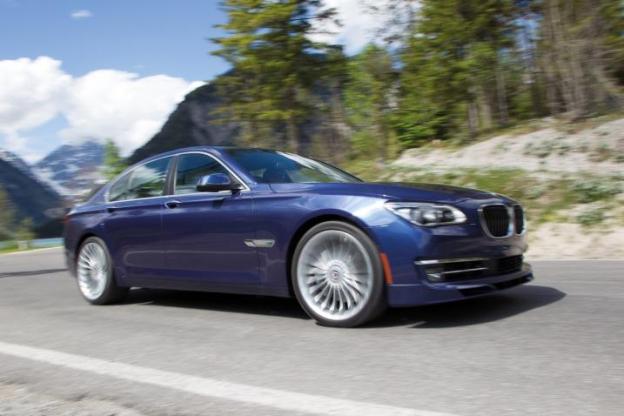 BMW’s M Division is one of the most respected names in automotive performance. Its engineers turn humble 3 and 5 Series cars into M3s and M5s, making tire-shredding magic in the process. However, M does have its limits. Despite dabbling in diesels and SUVs, the people running the M Division have always felt that a sporty version of BMW’s flagship 7 Series is too out of character. Luckily, BMW tuning partner Alpina has been building such a car, the Alpina B7 for years. This ultimate 7 Series is getting some updates for 2013.

The rest of the B7 needed to me tweaked to handle the increased power, and to make it appreciably sportier than a non-Alpina 7 Series. The 2012 B7’s six-speed automatic is replaced by a reinforced version of the eight-speed used in other BMWs. Alpina also retuned the suspension’s electronic damping and the stability control.

Some subtle modifications were made to the car’s styling, but the most noticeable change is the set of 20-spoke wheels. These wheels are an Alpina trademark, and are a massive 21 inches in diameter on the 2013 B7. Many BMWs come with run-flat tires, but Alpina thought they would compromise the B7’s sporty character. The car comes with grippy Michelin tires instead.

The B7 is an excellent way top the 7 Series range, and it showcases what Alpina is all about. This tuner has close ties to BMW, because it builds the cars the company’s own M Division won’t. “M” stands for “motorsport,” so its cars have always been racecars for the road.

In contrast, Alpina focuses on more relaxed performance; it works with less-sporty cars like the 7 Series, and turned to turbochargers as a way to gain usable power when the M Division was still building high-strung, high-revving engines.

Unlike most independent tuners, Alpina’s cars can be ordered from a BMW dealer. The 2013 B7 will start at $128,495, plus an $895 shipping charge. The B7 will be offered in both short- and long-wheelbase models, with either sDrive rear-wheel drive or xDrive all-wheel drive.

How to turn off PIN on Windows?