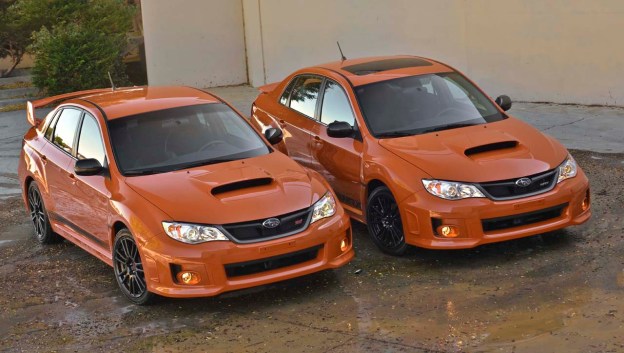 If you want a turbocharged, all-wheel drive rally car to go Trick-Or-Treating in, you’re in luck. Subaru is building a limited run of WRX and WRX STI Special Editions, and each comes decked out in orange and black.

Both models come in a special Tangerine Orange Pearl hue, paired with jet black wheels, blacked-out badging, and optional black graphics. The graphics actually give this Subaru a bit of an old school muscle car look.

As if bright orange paint wasn’t a good enough way to stand out, Subaru will only build 300 Special Editions; 200 WRXs and 100 WRX STIs. It’s very unlikely that you’ll see another one in the parking lot.

However, like most automotive special editions, special graphics and rarity are the only substantial changes to these two Subarus. Still, the WRX and WRX STI remain quite potent on their own.

For those non-Subaru cultists who may not know, the WRX and STI are two performance versions of the Impreza compact car. The WRX sports 265 horsepower and 244 pound-feet of torque, courtesy of a turbocharged 2.5-liter boxer-four. If that’s not enough, the STI (which stands for Subaru Tecnica International, the company’s performance division) ups that figure to 305 hp and 290 lb-ft.

Both cars come standard with Subaru’s “Symmetrical” all-wheel drive system. The WRX has a five-speed manual transmission; the STI gets a six-speed and electronic driver aids, including an adjustable center differential, Vehicle Dynamics Control, and Subaru Intelligent Drive (SI-Drive).

The 2013 WRX and WRX STI are based on the discontinued third generation Impreza; Subaru’s small car was redesigned for the 2012 model year. Subaru is still selling the “old” WRX while it works on an all-new model based on the current Impreza.

One thing that does set the WRX and WRX STI Special Editions apart from other special editions is their relatively low price. Some carmakers make their customers pay for exclusivity, but both Subarus command a mere $500 premium over their un-special counterparts.