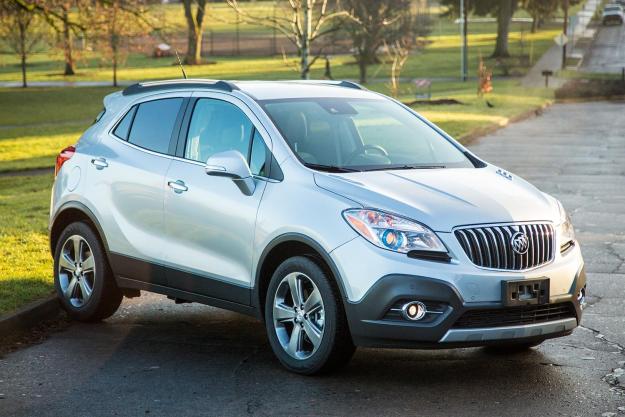 “Most of Buick’s lineup might be stuck in the 1990s, but the Encore – despite its looks – is hugely modern and wondrously tech-savvy for the money.”

General Motors filed bankruptcy a few years ago and began slashing brands. I thought, surely, Buick would get the axe along with Hummer, Saturn, and Oldsmobile.

For some reason, though, GM kept Buick on its books. This left me scratching my head with dismay.

The Encore looks as though it was designed by a man who’s never seen a car that wasn’t built by General Motors.

Unlike the brands GM kept alive, Buick didn’t seem to have an identity. Cadillac is the new BMW-fighting American brand. Chevy remains the economical family brand it’s always been. Buick, though, just seems to have simply adopted the old codgers who were scared away from Cadillac when it was rebranded as sport luxury. Why keep such a moniker?

Over the last few years, Buick answered my questions with a few new and surprising products.

First it unleashed the entry-level Verano, which is based upon the German-designed Opel Astra. While I’d never recommend the Verano over, say, the Mercedes CLA-Class, I would say it’s a fine car.

Building on that, Buick has released another variant of that Opel platform in the shape of a compact CUV called the Encore. And that is what I found myself piloting around Portland this week.

I’ve been debating my feelings on the exterior design of the Encore, and I think I’ve come to a conclusion: I like it, but just.

Like the rest of the Buick line, the Encore looks as though it was designed by a man who’s never seen a car that wasn’t built by General Motors. If the Saturn and Oldsmobile brands were your visual standard, you’d be quite proud of the Encore’s confused lines and accents. Hold it up against a comparably priced Audi Q3 or Mercedes GLA, and you’ll wonder what century the Encore is from.

Look at the thing. It has those silly, outdated hood vent things, a stubby, beak-like nose, and – for some reason – blue accenting in the headlights. With features like that, it should come with a complementary N’Sync CD. It’s wildly twee.

All that said, I kind of like it. Yes, it’s a body only its designer could love. But despite its 1990s, micro-luxury looks, it sits proud, as if it’s chiming, “my mom says I’m the handsomest boy in school!”

For that, it finds a place in my heart.

Under the Encore’s not-so-rakish hood is a turbocharged 1.4-liter Ecotec four-cylinder engine making 138 horsepower, which is mated to a six-speed automatic that sends power down to the front wheels. The EPA rates the Encore at 25 mpg city, 33 highway, with a combined score of 28.

Off the line, the power isn’t great – nor is traction. In the wet, anything more than three-quarters throttle will send one wheel spinning. And when it does grip, power won’t wow anyone under the age of 75. It’ll get up and go and you won’t feel like pulling over to whip some motivation into it; you just won’t be wowed either.

This isn’t to say the powertrain is bad. I kind of liked it. It’s got a great sound for such a little motor. Compared to other compact CUVs and it’s downright sporting. Korean engines, by comparison, buzz. This Ecotec has a mighty little roar. Again, it’s plucky. It’s scrappy.

Yes, I was surprised Buick received a stay of execution in 2008. That aside, it’s the Encore that really surprised me.

Although it’s designed on a German platform and sold by an American automaker, the Encore is built in Korea with parts out of China. That doesn’t have any broader relevance; it’s just interesting. I just wanted you to know that.

That out of the way, let’s talk interior. The interior – just like the exterior – isn’t anything to send Buick a thank-you letter for. It’s grey and looks like most GM products. Underneath that uninspiring sea of grey buttons is shockingly impressive list of features.

When it comes to evaluating a car, sometimes you have to sit back and look at the bigger picture. Yes it has outdated looks and its interior, though roomy, isn’t a knockout, unlike those of its competitors.

For the money, though, it’s an absolute bargain. For $30,000 you get a car that has all the comfort and features you’d expect from a Mercedes for about half of the cost. Yes, it won’t win any beauty pageants, nor will it win any races. For a comfortable runabout, full of the best tech the automotive industry has to offer, it’s a winner.

I still don’t really ‘get’ Buick. But I get the Encore. And I like it.