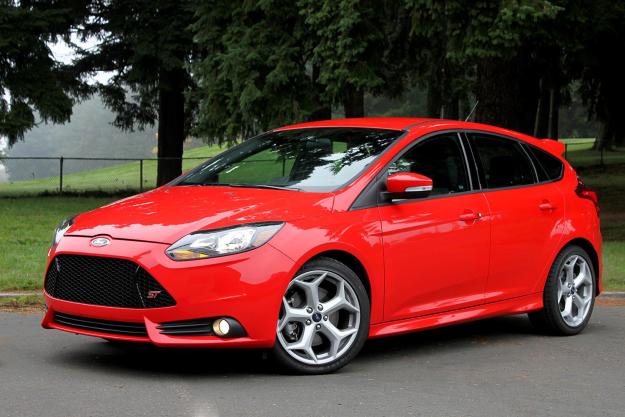 “The Ford Focus ST is good to look at and good to drive but when compared to the exceptionally lively VW GTI, it falls flat, as it feels like a copy of a copy.”

Hot hatches are finally ‘in’ in America. For those of you who don’t know what a ‘hot hatch’ is, it’s essentially a hatchback sports car that lives in two worlds.

The little spoiler at the back tells onlookers that there’s something special going on under the skin.

In one world, it’s an efficient five-door when you need to move some stuff or get to work. In its other world, it’s a whiplash-inducing sports car perfectly primed for when you’re ready to have some fun. For many of us automotive nerds, hot hatches are the best of both worlds.

Although the hot hatch breed has been popular in Europe for decades, it wasn’t until recently that the cars caught on in America.

Now that they’re here, though, the race is on.

For the first time ever, Ford has a car – the Focus ST – to answer the long-reining Volkswagen GTI. But can the American-built micro bruiser hold up to the Teutonic magnetism of the vee-dub? Let’s find out.

At first glance, there’s no denying the visual charms of the ST. It has sleek lines and looks both light and substantial at the same time. I don’t know how the Ford designers did it.

The little spoiler at the back tells onlookers that there’s something special going on under the skin. The gaping grille mouth in the front might appear carp-like, but it serves a cooling purpose. The bright color options that tell people you’re here to shout pair well with the brightly colored ST logo tucked low into the corner of the grille and in the back on the hatch lid.

Say what you will about the exterior. Let’s face facts, though, as the owner, you won’t spend much time looking at it. Well, at least not much of it. You’ll spend the majority of your time behind the wheel looking out over the sloped hood. So let’s pop that puppy and see what it’s packing.

Ford put the 252-horsepower and 270 pound-feet of torque version of its 2.0-liter four-cylinder EcoBoost engine between the frame rails of the Focus ST. Good for 23 mpg city and 32 highway, the EcoBoost will bundle the ST to a top speed of 154 mph, which isn’t too bad. Heck, it’s fast enough to send you to Federal prison here in the U.S.

Where the Focus ST feels like a copy of a copy, the GTI is a living, breathing wild soul.

Bolted to the ‘Boost is a six-speed manual that offers crisp, confident shifts without much worry or fuss.

Beneath that powerplant package is a variable ratio electronic steering rack that automatically lightens up on the straights and quickens up in the corners. Ford says that, thanks to the electric steering, drivers can firmly grip the steering wheel through tight turns, which maximizes control of the car. I agree. But I am also not sure how this is different than any other car. No matter. Let’s move onto the part of the car where the steering wheel is located.

The cabin of the Focus ST is an interesting place. It’s undoubtedly modern. The fit and finish is miles ahead of Fords of the early 2000s. At the same time, however, it’s almost cartoonish. Everything is big and bulbous and sort of silly looking. I believe in taking risks but this risk has failed Ford.

Aside from the visual rotundness of the interior bits, the rest is rather pleasing. The Recaro sport seats hug you tightly without the normal uncomfortable feeling of race-like seating. They’re well cushioned and allow the driver and front passenger to sit up straight during hard cornering.

Many mean things have been said about MyFord Touch SYNC. I had no issues with the system this go-round. Bluetooth smartphone integration was simple. Working the hundreds of system menus was fairly easy. And the thing isn’t too bad to look at – even if the primary color scheme is a bit annoying.

The best part of the Focus ST interior, however, is its quietness. Many small, relatively inexpensive cars – from all ends of the earth – suffer from loud cabins, low NVH. Ford has focused in on fixing this issue, one that used to plague the American automaker, and essentially sorted the problem. No matter the speed, your senses won’t be inundated with wind and tire-caused white noise. It’s lovely.

One downside to this quietness is that designers had to pipe engine sounds into the cabin through a tube in the firewall. This makes sense, though. You don’t want your $29,000 hot hatch to whisper around the road like a Rolls-Royce. You want it to be shout-y and a bit repugnant.

Accordingly, the Focus ST sounds very sporty indeed, as its interior speakers send engine sounds at the driver during acceleration.

Ford has been making noise about torque vectoring, which uses electrons and math to solve front-wheel drive torque-steer issues, for many years now. Not too long ago, anytime Ford put more than 17 horsepower in a front-wheel drive car, the thing would rip around and try to go off the road at full throttle.

Off-the-line acceleration is impressive and will put a smile on most anyone’s face.

The torque vectoring system of the Focus ST was supposed to solve all that. And it has – nearly.

Yes, straight-line acceleration is much improved in the ST and you can tell the wheels are able to put down nearly all 252 ponies to the pavement. You still need to fight the steering wheel a bit, though. It still wants to lightly pull the wheel from your hands when you get on it.

If you keep the wheel straight, off-the-line acceleration is impressive and will put a smile on most anyone’s face.

While you’re giving the throttle all the beans, the artificial engine sounds that the stereo puts out are good. You can tell, though, they’re not quite real. It sounds like as if someone at Ford described over the phone to an audio engineer what a throaty four-cylinder sounds like at full throttle. And what he’s come up with is quite convincing. It’s still not authentic enough for my tastes, though.

For the first time, cornering is impeccable in the Focus. I never once felt that I was pushing past the car’s traction limits. The body stayed flat and planted through the bends.

The Focus ST ticks all the boxes on my new car checklist. It has all the bits. It looks pretty snazzy. It goes pretty well and handles even better. The inside is quiet and spacious. And it’s affordable.

When I stand back and look at it, though, I can’t help but feel like something is missing.

The analogy I used earlier, about the artificial engine sounds that are piped into the cabin, comes to mind. Like the routed-to-the-cabin-routed engine sounds, the Focus ST doesn’t feel real.

It certainly tangible but there’s something slightly off about it. It’s like the Ford boys crowded around a phone in a conference room in Detroit one afternoon and listened to a Brit explain to them how a hot hatch should sound, look, and drive.

I’ve driven the all-new Euro-spec mk7 GTI and although it’s not yet on sale in the U.S., it trounces the 2014 Focus ST. Not in any one way but just over all. It’s more fun than the Focus. It’s more alive. Where the Focus ST feels like a copy of a copy, the GTI is a living, breathing wild soul.

Yes, the Focus ST is a brilliant car. I just wouldn’t buy one.