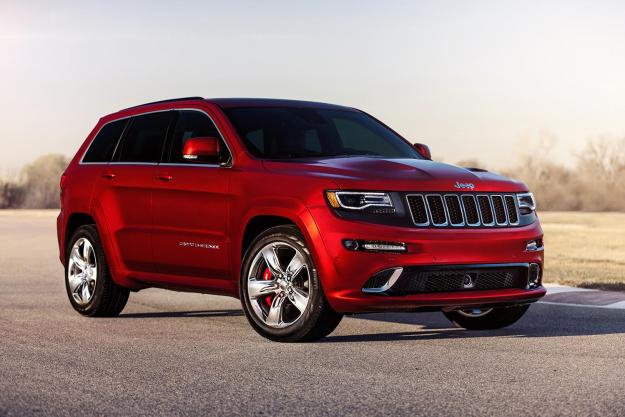 “The 2015 Grand Cherokee SRT is Jeep’s shot across the bow of its former German overlords. With a 470-horsepower HEMI, it’s less of a sure shot than it is a scorched-earth tactic.”

Update 11-19-14: This review originally covered the 2014 model year of the Jeep Grand Cherokee SRT. The 2015 Jeep Grand Cherokee SRT is in showrooms now. No substantial changes were made to the body or design of the car, but the latest model touts more horsepower and torque, along with a few other changes. All changes are listed below.

I really like the new Grand Cherokee. And I really like unreasonably large amounts of horsepower. So it stands to reason combining the two would make for a real hoot of a vehicle.

Yes, the new Grand Cherokee with its world-class exterior design and segment-leading interior refinement and technology is only made better by the addition of a 470-horsepower 6.4-liter HEMI V8.

That isn’t to say, though, it’s not without its fault. But don’t worry; we’ll get to that shortly.

While there have been many HEMI-powered and extreme-looking Grand Cherokees over the years, I think this one is perhaps the best to behold.

Unlike the previous versions, which still looked a bit too much like a melted football helmet for my taste, the 2014 brings together menacing looks with gentility. You can see the 2014 GC SRT wants to beat you to a bloody pulp, but before it does, it’ll ask you very kindly to take your seat. “If you don’t mind, I’d prefer you take your seat before we initiate the thrashing.”

Blacking out the signature Jeep grille and adding some adaptive bi-xenon headlamps – also with a black background – created this new, cultured effect.

Along the side, Jeep added some huge, 20-inch wheels that it calls “Goliaths”, which are wrapped in Pirellis. This is a rather amusing name to me. It sounds good, sure. But it’s like calling the wheels “Rommels”; sure, it sounds good, but, ultimately, they’re named for a fierce warrior … who lost.

Around back, Jeep finished off the new forbidding look with dual, four-inch tail pipes, an integrated rear spoiler, and some big LED tail lamps.

While the exterior of the current Grand Cherokee is arguably better than its predecessors, it’s the interior where the biggest change lies.

Gone are the ill-fitting plastics and horrid digital green displays. In their place, Jeep designers have formed a very handsome dashboard with real wood and leather trim, accented by two glowing color screens.

In the center of the dash is an 8.4-inch Uconnect touchscreen with more features than I care to list. If you can conceive of something for your in-car infotainment to do, the Uconnect system can do it – and do it well.

For the GC SRT, Uconnect has been enhanced with SRT Performance Pages, including recent track times, lateral acceleration, 0 to 60 mph times and much more. If you get a time you like, you can share it with other motoring enthusiasts through the GC SRT’s built-in 3G connection.

In the center of the instrument cluster is where you’ll find the other color screen, which, like the Uconnect unit shows vast amounts of info, including two kinds of speedometer, fuel economy, four-wheel drive power delivery, and more.

Topping off the bright and refined feel of the GC SRT cabin is a massive panoramic moon roof, which floods the cabin in sunlight.

I feel like Iggy Pop would like the 2014 Grand Cherokee SRT, because it’s all about raw power.

I feel like Iggy Pop would like the 2014 Grand Cherokee SRT, because it’s all about raw power.

Under the hood, just like its predecessors, the 2014 GC SRT features a 6.4-liter HEMI V8 that makes 470 horsepower and 465 pound-feet of torque. Bolted to a new eight-speed automatic, it’ll surge to 60 mph in 5.0 seconds and run a quarter-mile in 13.7 seconds.

Smartly, to counteract all that unbridled acceleration, Jeep has fitted the GC SRT with Brembo brakes, six-piston calipers in the front and four-piston in the rears. The bright-red-painted brakes will bring the 6,500-pound GC SRT to a slamming stop from 60 mph in just 116 feet.

The sensation of the HEMI’s acceleration is intoxicating. Delightfully, you’re rewarded with all your lead-footed driving with a bellowing exhaust note that sounds like a destroyer firing all its guns at once.

It makes you feel like you’re charging, full-tilt into the apocalypse … and you’ve never felt better.

Click the wheel over into track and the GC SRT routes 70 percent of its torque to the rear wheels for, as Jeep puts it, “a more pronounced rear-wheel-drive experience.” This, as you’ll see in the video above, makes for some great cornering fun.

Close but no cigar

While these words and acronyms sound good, the GC SRT’s massive weight still can overwhelm them. Hit a bump or encounter an elevation change and the suspension hesitates for a moment, leaving you wondering how it’s going to react.

Jeep has proved without question it can make the GC SRT go very, very fast in a straight line, its engineers still haven’t overcome the handling physics of a high-riding three-ton truck.

The Brembo brakes might be able to stop the car incredibly quickly, but they won’t be able to do it many times. With any sort of performance driving, the brakes are quickly overheated and become gravel-y, smoking mush.

Then, though, there’s the price. The Grand Cherokee SRT will run you around $73,000. Jeep is quick to point out that the Porsche Cayenne S is similarly priced but is slower to 60 mph by 0.4 seconds.

This is true. But 0 to 60 can’t be the only consideration. Spend the money on the Cayenne S and you’re still getting a Porsche – not a Jeep. I promise you the Porsche is better built, as its headlights won’t be filled with condensation, as were those on my GC SRT tester. And the Cayenne S won’t leave you looking like a random yahoo in the country club parking lot like the Jeep will.

So if you’re in the market for performance SUV, I say get the Audi SQ5. It, too, can do 0 to 60 in around 5.0 seconds, and has an easily overwhelmed suspension. Unlike the Jeep, though, the Audi will only run you around $52,000.