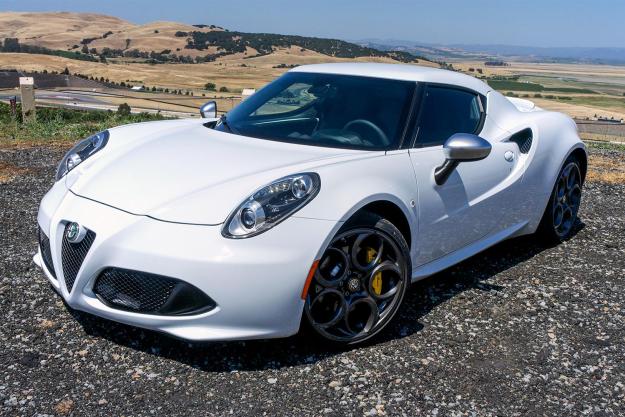 “As an exotic for a domestic price, the 2015 Alfa Romeo 4C is the perfect car for a driving enthusiast who values attention-getting looks above all else.”

Dropping behind the wheel of the Alfa Romeo 4C with a cup of cappuccino in my left hand, I turned to my tall, blonde co-pilot and asked for my biscotti.

“Look how Italian we’re being!” she beamed.

“Yes, but the Italians would never approve of driving while consuming coffee and pastries behind the wheel, no matter how Italian.” I reminded her, as I bit into my biscotti sending crumbs exploding across the tiny cabin.

“See,” I began, brushing the crumbs onto the floor mat covering polished carbon fiber, mouth still full of sharp biscotti fragments. “I’ll bet these poorly placed cup holders aren’t even included in the European version of the 4C.” I pointed to the shallow divots carved into the hard plastic that covered the transmission cover, directly in line with the driver’s right elbow.

“Well, I’m still having fun!” She shouted in retort over the excruciating ringing chime that marked the completion of the 4C’s ignition process.

“As am I, dear. As am I.” With that, I pushed the “1” button on the center console and ripped off in a loud four-cylinder bellow, marked with just a soupçon of turbo whine.

I am not being pedantic about that horrendous chime that goes off after the 4C is started. Honestly, calling it a chime is like calling Donald Trump’s mop-top a hairdo; it’s a downright monstrosity and everyone knows it, no matter what you call it.

Regardless, the chime honestly sets the tone for the driving experience of the 4C because the little wedge of Italian carbon fiber is very, very loud. However, that’s not all bad.

Yes, at ignition and on the highway, a driver might wish he’d spent his money on a sensible Lexus rather than a stripped-down sports car because his tinnitus will be in full force. On the backroads, or tooling through town, he’ll be quite pleased with himself indeed.

The full-throttle note of the Alfa Romeo 4C is like virtually nothing else on the road today. It has the sucking, spinning turbo sound of the Noble M400 with the diminutive but brawny tone of the FIAT 500 Abarth mixed with the sounds of a sport bike.

It’s very loud and everyone will look at the car wondering just what the hell it is. Then, when they see it, they’ll be glad they looked.

Weighing only 2,465 pounds and boasting a mid-mounted 1.75-liter four-cylinder engine that makes 237 horsepower and 258 pound-feet of torque mated to a six-speed twin-clutch transmission (TCT), the 4C feels very fast 0 to 60 — much faster than the “mid-4-second range” run that Alfa claims.

With a car like this, though, buyers ought not expect its shining beacon to be straight-line speed, but rather cornering capabilities.

The 4C is not the micro grand tourer some had hoped it’d be.

Let me start off by saying the 4C handles unbelievably flat. It corners like an Huracan. Just because it’s sure-footed through the bends doesn’t mean that the driver isn’t at all scared – quite the opposite, in fact.

The powerless steering has no on-center feel. That means the driver can wiggle the wheel back and forth on a straightaway, and the wheels will move slightly, but the steering rack itself has no weight and no feel. Come into a corner, though, and the steering gets exponentially heavier.

This meant, when I came hard and fast into a corner and found myself slightly off trajectory, I had to use all of my might to wrench the wheel a few inches to get it back on track. This proved frightening for both my passenger and me.

The scary steering didn’t end there, I’m afraid. On backroads, the 4C found grooves in the tarmac that simply didn’t appear to be there. At any moment, the car would be jumping and weaving around on the road, like it was Kevin Bacon from Footloose. And since the steering had no feel in the center, I couldn’t feel the changes in my hands, nor really correct them; I had to simply hold on tight and try to enjoy the ride.

Then there are the brakes. They’re good, but not great. I never felt – when stomping on the pedal – that I was actually going to stop or slow exactly how and when I wanted. The pedal had excellent feel and the brakes grabbed well, they just didn’t stop or slow the car until the last possible moment.

This isn’t to say that the driving experience of the Alfa Romeo 4C isn’t fun; it is. It’s very distinctive and very frightening at times.

Of all the complaints I have with this car, I have one huge compliment to help balance it out: the most excellent TCT transmission.

The TCT is a downright masterpiece. In both automatic and manual modes, the thing proved hugely impressive. On full throttle upshifts, it kicks and bucks like a Ferrari’s F1 gearbox. On calmer in town shifts, however, it’s nearly as smooth as a standard automatic.

And that wondrous transmission is mated to an even finer engine. If any of my fellow motoring enthusiasts are concerned that a turbo’d four can’t quite possibly live up to a V6 or V8, they needn’t look any further than the 4C’s 1.75-liter four-banger.

80 percent of the engine’s torque is available as low as 1,700 rpm. So that means it pulls and pulls and pulls unlike any sub-2.0-liter engine I’ve ever experienced. And it makes a racket that will make you grin for weeks after having heard it.

While the 4C has big power and makes bigger noises, the rest of it, as I am sure you’ve noticed, is quite small – especially its interior.

The twin-clutch transmission is a downright masterpiece.

The cabin is very spare and very small. Aside from a dinky radio and some window switches, there’s not much else in the way of creature comforts. And if a buyer was hoping not to hear everything the engine, transmission, and tires were doing, even with the windows up, he or she is not coming at the car with the right mindset. The 4C is not the micro grand tourer some had hoped it’d be.

This isn’t to say the experience of being an occupant in the tiny Italian is terrible; it’s not – well, at least not for the driver.

At six-foot-five-inches tall, I – amazingly – had both just enough head and legroom to be comfortable. Granted, I only had a few inches above my cranium and in front of my knees not to come into contact with plastic. However, I had room.

Accordingly, the driving position is pretty comfortable. Rather than having to sprawl backward, as I had in the Aventador, in the Alfa I could sit straight up. And with almost nothing up front, I had very little hood to look over, which made me feel like I was riding the road, rather than the car.

The same cannot, sadly, be said for the passenger. The hideously hard plastic dash is designed and canted toward the driver. As such, the passenger gets many inches more of dashboard in front of them. This leaves passengers taller than six feet very uncomfortable indeed. In fact, when I rode shotgun, my knees were bent at a 30-degree angle and throbbing in pain.

Then, when I took the 4C through a car wash, I lost what little rearward visibility I had to begin with, as the open vents to the engine compartment allowed tons of water to pour onto the hot exhaust system, which vaporized the soapy water, clouding my rearview.

I’ve driven all kinds of exotic cars. Each one attracted attention around town in its own way.

Onlookers were excited but slightly put off by the Lambos. The folks who noticed or recognized the Bentley Continental GT Speed were fairly excited to see it, but not overly so. People in traffic loved to take pictures of the backend of the Audi R8. While most who saw the Ferrari 458 Spider were just visibly upset, as – for some reason – the brand raises people’s ire.

Tooling around town, however, in the Alfa Romeo 4C, I was surprised to see another reaction altogether – and one I hadn’t really expected. Everywhere I went, the sight of the Alfa elated people.

Men, women, and children of all ages were excited and happy to see the 4C. I thought the shout-y exhaust might upset and annoy passersby, as the loud Jaguar F-TYPE Coupe R had. Instead, everyone pointed, took pictures, and congratulated me.

This, I reckon, is the main reason to buy the Alfa Romeo 4C: It’s an exotic for a domestic price. To get anywhere near the attention shown to the 4C, a buyer would have to spend double to quadruple the price.

Because – honestly – for the $64,000 price tag on the 4C I tested, attention is what a buyer is paying for. If someone simply wants a small, mid-engined sports car that drives like its on rails, they’re better off with a moderately optioned Porsche Boxster or Cayman; they’re far better cars for the money.