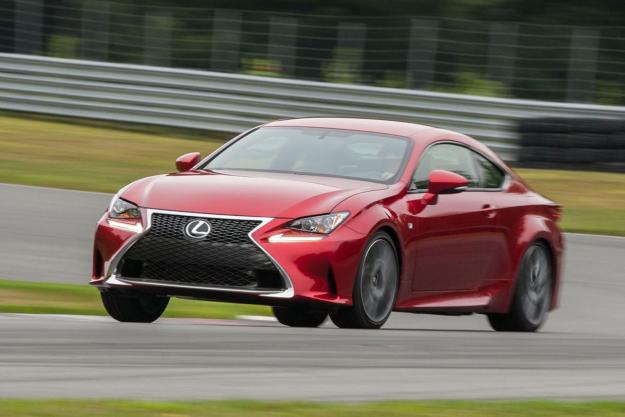 “If you’re enamored with the driving sensation provided by video-game driving simulators, you’re going to find yourself smitten with the RC 350 F SPORT.”

Several years ago, I worked for an old Bavarian man, Ralf, who ran a German automotive repair shop. With this old guy, there was never an even keel; it was always peaks and valleys.

When Ralf was younger, his life seemed peachy and ideal. He had a long-lasting business, loyal customers, two grown kids, and a collection of old Porsches. Amazingly, though, that lifestyle didn’t bring him joy or longevity. And, if you believe Ralf, it was in fact boring him to death.

Ralf recalled to me that one day in his mid-60s, he broke away from the norm and started making wild choices that brought him alternating fortune and misfortune. Unexpectedly, his hair started growing back. He lost weight. He started feeling more energetic. His business took off. He impregnated a fiery woman half his age. It was swing back and forth that kept him going, he believed.

The RC is an interesting car. It’s not simply a shortened version of the new IS, as one might expect. Instead, its chassis is an amalgam of several different Lexi (my plural of Lexus). The front chunk is GS. The extra-rigid middle is taken from the old IS C convertible. And the back bit is from the new IS.

To stiffen it further, Lexus engineers added laser screw welds and four extra brace points throughout the body. The result is a seriously stiff sports coupe. In this way, the RC is outstanding. But I’ll get to that later.

Wedged between the rigid frame rails is a naturally aspirated 3.5-liter V6 that produces 306 horsepower and 277 pound-feet of torque. When fitted with rear-wheel drive, the V6 is bolted to an eight-speed Sports Program Direct Shift (SPDS) transmission, which I call “spuds.” When optioned with all-wheel drive, however, the V6 is mated to a six-speed auto.

The spuds transmission has three modes – Normal, Sport, and Manual (M). Lexus brags that, with an automatic blip of the throttle, downshifts are performed in just 0.10 seconds in M mode. And I believe it.

The technical wonders don’t end there. In Sport mode, the transmission will use information coming off a G-sensor and AI-Shift control to select optimal gears in high-speed cornering and also automatically downshift during hard braking, to keep revs high for when the driver gets back on the throttle.

Stepping things up one level further, the F SPORT model I drove featured a Sport+ mode, which, with a twist of the chunky performance knob, stiffens up the normally cushy dampers in the RC, making it very, very flat in the corners.

Delightfully, the suspension is not so stiff as to cause “Bonus Eruptus,” a condition where, according to The Simpsons’ Dr. Nick Riviera, “the skeleton tries to leap out of the mouth and escape the body.”

This is where things take a turn, I’m afraid. Like the life of our old friend Ralf, checking all the boxes doesn’t add up to perfection.

You’ll feel about as connected to the process as when you text your vote in on The Voice.

Comparing the driving feel of the RC 350 F SPORT to, say, other sport coupes like the BMW 4 Series or the Cadillac ATS Coupe wouldn’t be fair to those cars. So let me rather put it this way: If you love driving simulators, you’re going to love the driving dynamics of the Lexus RC 350 F SPORT.

What do I mean by that? Well, if you’ve fallen in love with the engine noises, the visual sensation of speed, and the heavy and disconnected steering feel of driving simulators like that of Gran Turismo, you’re going to have no trouble feeling right at home with the RC.

The problem is that, while the RC is incredibly competent, it feels completely disconnected, as if its name stood for Radio Control.Stomp on the skinny pedal and the numbers on the dash go higher, the world moves by the windows faster, and the engine makes a louder noise. Yes, the RC 350 F SPORT does 0 to 60 in 5.8 seconds, but from the seat of your pants, you wouldn’t ever know it.

Winding through a bendy bit of road, the coupe will competently comply with all steering input. However, gripping the fat, F SPORT steering wheel, you’ll feel about as connected to the process as when you text your vote in on The Voice.

When I sit back, though, and hammer the thing, I don’t feel anything. The RC doesn’t provide the odd admixture of joy and fear that I associate with spirited driving. I know I am doing some speeds and making inputs that affect the car … I just can’t feel it.

For me, this misses the whole reason why driving is fun: the drama.

While the RC might lack roadway drama, it offers enough visual drama to set it apart from the segment of very conservatively styled sport coupes.

Lexus is quick to brag that the interior style of the RC is reminiscent of the LFA supercar. This supercar infusion has done wonders for the RC, which separates it from the all-too-drab cabins of its brand-mate compatriots.

The RC’s interior is downright visually stunning, with a brilliant two-tone color scheme with accent stitching and an attention to detail that is distinctly Japanese.

Yes, the F SPORT instrument cluster is a single circle surrounded by far too much black space and the infotainment screen is still the old unit I’ve complained about for years. Delightfully, though, that old infotainment system is now controlled via touchpad instead of that weird joystick thingy.

That newfound supercar flair is carried to the exterior, too. Some some people will hate its looks, but they can’t deny that it is unique. When I was driving around town, passersby would ask me what kind of car it was. When I informed them it was a Lexus, they’d look at me in disbelief. “Really?” they’d ask.

The big hourglass grille has been bent and distorted, and the back haunches feature Scion-y gills. Not only is it a very visually shout-y Lexus, it’s perhaps the most daring design in its class.

Drama, the spice of life

This brings me back to Ralf. The normalcy, he thought, was sending him to his grave. It was a normal, sustainable life, but he never felt anything. He needed the ups and downs to enjoy his existence.

With the RC 350 F SPORT, it’s much the same. A driver can get behind the wheel and it’ll be the same every time, day in and day out. It’ll never be feral or frightening; it will just be.

This is totally fine for some. If you don’t want wackiness in your daily commute or Sunday drive, that’s completely understandable. If you want to translate the video-game sensation to the daily commute, I won’t fault you. In fact, I’ll encourage you to get the RC, as by all rights it’s a great “car” – but it’s not a great sports coupe.

It’s a perfect car for a buyer who wants to feel like they own a sports coupe without actually having to drive one. They get the outstanding styling, the powerful engine noises, and the supercar-like interior without having to drive a Teutonic tarmac tamer. In an RC, an owner can drive like a dentist but feel like a playboy.

If you want to hit some literal – and figurative – peaks and valleys, though, and feel every damned last G that this world has to throw at you, you’re going to have to pull a Ralf and embrace the tumultuous Bavarian inside you. Saunter down to the BMW dealer, plunk down the money for the 4 Series and enjoy the ride.