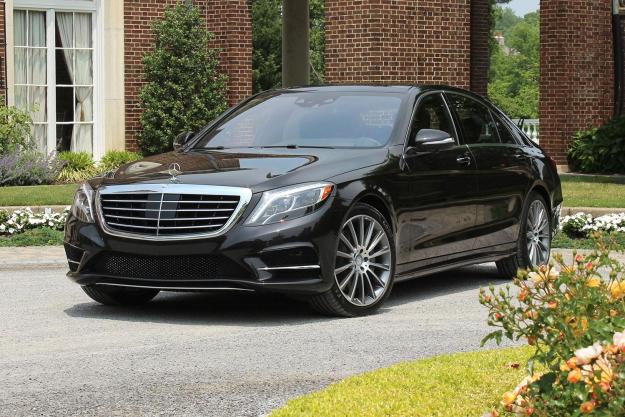 “The sheer number of gizmos that Mercedes packs into the S550 almost overwhelms the remarkable refinement underneath.”

Every new generation of Mercedes S-Class has set a standard, not just for other Mercedes, but for all cars. From style, luxury and (most importantly) technology, the S-Class has constantly been the benchmark other automakers aspired to surpass.

The latest iteration of the full-size luxury sedan endeavors to do the same, but in an era when even a $16,000 Chevy Spark comes with a 7-inch color touchscreen, how does the S-Class maintain its paragon status? Simple – Pack it with more gadgets, features, and details than ever before.

Mercedes-Benz’s S550 4Matic packs a 4.6-liter Bi-turbo V8 under the hood, sending 449 horsepower and 516 pound-feet of torque to all four wheels by way of a seven-speed automatic transmission.

The silhouette of the S-Class is unmistakable across the globe, and the S550 carries on the tradition of maintaining that presence, modernizing the car with minor tweaks, like a larger grille and flowing shape. Take the term “full-size” sedan to heart: There’s a lot of car here. Having one on hand, I didn’t know if I was coming off as a dignitary, professional businessman, or an Uber Platinum driver. But I did know that I had a wealth of technology to satisfy any situation.

That starts with the lighting: There isn’t a single light bulb to be found on the exterior or the interior. Fifty-six LEDs illuminate the road ahead while 35 LEDs make up the tail lights. Throughout the inside, there are nearly 300 of them performing various tasks including setting the mood with the ambient lighting package.

Behind the steering wheel sit two 12.3-inch high-resolution TFT screens where much of the techno-magic happens. One replaces traditional analogue gauges with a fully digital set that also communicates radio, navigation and phone info while it’s in use.

The neatest trick this screen has up its sleeve is the Autoliv night-vision system that brings an extra element of awareness to the car. The night vision displays itself between the gauges, near to the driver’s eye line. This display gives an enhanced black-and-white view of the area in front of the car and is also able to identify pedestrians at low speeds. I was stunned how the Autoliv system was able to spot pedestrians on the sidewalks of roads and highlight them in a red box before I was able to see them through the windshield.

Centered in the dash is the screen for the Mercedes COMAND system. The touchpad in the center console, drivers can flip through the menus that are displayed in an elegant user interface. Some modes show a diagram of the S550 on screen, highlighting selected systems like the engine or suspensions as you configure them

There’s a menu to adjust everything, from the different available massages afforded by the front seats to the level of potency of the fragrance the climate control has built into it. Once my phone was paired, I was even able to access the Internet through a built-in Web browser, though it seemed to be there just to show that it can be done. Web surfing from my phone without the Mercedes middle man was a far faster and more useful experience.

Would this be a Mercedes without a boatload of electronics? Certainly. Take away every little modern feature and this would still be an exquisitely crafted luxury automobile. The cabin is replete with supple Nappa leather surfaces accented by wood trim, contrasted by aluminum touch points in all the spaces in-between.

Powering the nearly 5,000-pound car is a 4.6-liter Bi-turbo V8 that dispenses 449 horsepower and 516 pound-feet of torque, hefting it from 0 to 60 in 4.8 seconds. That is more than enough to make a spirited jaunt to and from destinations. Mercedes’ 4MATIC all-wheel drive system keeps things firmly planted on just about any road condition thrown at it, while the seven-speed transmission routes power either with comfort and efficiency in mind or dynamic performance.

Woven into the S550 are a host of other sensors and functions designed to keep occupants (and pedestrians) as safe as possible.

Opting for the 4Matic system foregoes the automaker’s Magic Body Control, which isn’t a sexy dance routine, but an adaptive damping and suspension system that adjusts to match the approaching road surface. Stereo cameras scan the road ahead to detect uneven terrain, instantaneously communicating that to the on-board computer which optimizes the suspension automatically.

Woven into the S550 are a host of other sensors and functions designed to keep occupants (and pedestrians) as safe as possible. With functions like Pre-safe Plus, the car can detect pedestrians at low speeds and brake autonomously if one is suddenly in the car’s path. The same goes for when the Mercedes detects an imminent rear-end collision, which not only brakes, but does so in a controlled manner to reduce whiplash, as well as controlling seat belt tension as to reduce injury.

Having to meet the expectation as the car with the most built-in toys in today’s tech-heavy world, it seems the idea of “too much” probably never occurred to Mercedes. To be fair, it probably doesn’t occur to any other luxury automakers either, but for the S550, it seems like there’s so much going on to the point of distraction. As beautiful and eye-caching as the interface is for the COMAND system, it’s just that: eye catching. Manipulating functions on the myriad of settings menus means more time looking at the gorgeous graphics and not at the road. A few functions can be done with a blind button push, but they are few and far in-between.

Being the showcase for the brand means that all these gizmos appear across the lineup, too. For all the useful safety and comfort features that proliferate across the brand, the other Mercedes vehicles are picking up the S-Class’s bad habits as well. Mercifully, we are talking about a carmaker that has been in the game long enough to lock down the fundamentals of quality vehicle engineering and know that gadgets do not a good car make. The things that make the S-Class great are the things that came before sensors and night vision – comfort, performance, and a quality build with top materials.

In comparison to rivals like the Audi A8, the Mercedes S550 seems more fanciful, whereas the Audi is all business. That level of luxury comes with a substantial price tag as well. Starting at $97,400, the S550 already begins at a cost nearly $8,000 higher than its Audi contemporary. Yet the A8 has many similar technology features, and significantly more user-friendly methods to use them.

The Mercedes-Benz S550 is still the vehicle that automakers will try to emulate, but none will be able to match the distinct S-Class experience. The car’s near overreliance on tech novelty, however, overshadows the fundamentally well-crafted platform it’s built upon. Less is more, but when “less” is off the table, the “more” needs to feel less overwhelming.