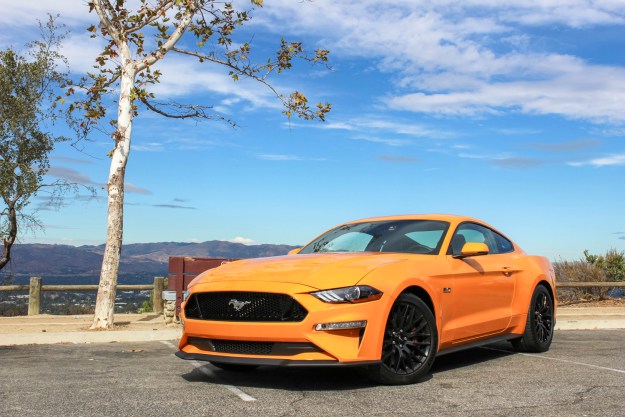 “Ford’s latest Mustang is a wild stallion – with gadgets.”

Trying to keep a car like the Ford Mustang true to its roots, yet up to date, is tricky business. Traditionalists love the Mustang in its purest form — a big, throaty muscle car with a powerful V8 and a manual transmission. Yet the average owner wants better handling, greater fuel efficiency, and style that wouldn’t look out of place in American Graffiti.

That’s the problem Ford was looking at when it came time to update the Mustang for its sixth generation. Ford even wanted to sell the distinctly American car in Europe, so it was clear the Mustang needed drastic changes.

To that end, the 2015 Ford Mustang had a style that looked towards the future, instead of the past, with an independent rear suspension, and Ford’s turbo ecoboost four-cylinder. The changes riled up those who wanted the Mustang untouched by such things. Yet the changes were successful, and with its 2018 refresh, the thoroughly modern Mustang is in even better shape to contend with rivals.

The 2018 Ford Mustang is an updated version of the current-generation car. Along with some style tweaks to update the exterior, the traditional instrument panel goes fully digital, which will compliment new menu options. Solid upgrades can be found throughout the drivetrain, and an optional active suspension helps drivers keep control.

A 5.0-liter V8 and a 2.3-liter ecoboost power plant are still on offer, but the naturally aspirated V6 has been put out to pasture. The V8 has been reworked to produce 460 horsepower and 420 pound-feet of torque. Its engine speed has been increased as well, and can reach 7,500 rpms. It’s an output that goes to bat against the Chevrolet Camaro’s 6.2-liter V8 that cranks out 455 hp, and the Dodge Challenger’s 6.4-liter V8, which belches out 485 hp. Both the Mustang’s mills can be paired with a six-speed manual transmission, or an all-new 10-speed automatic.

Gone are the analog gauges that previously flanked an info screen in the dashboard cluster, replaced by fully digital gauges on either end of the 12-inch LCD screen. The instrument panel displays directions when the navigation is on, allows access to a multitude of menus, and changes graphically depending what mode is being used.

The thoroughly modern Mustang is in great shape to contend with rivals.

Many of the settings can also be customized and saved under a driver profile. Different pre-set modes like “sport” and “track” are still available at the flick of a switch, but now through the instrument panel’s menu, individual parameters can be adjusted. For example, a driver might like the tighter steering of sport mode, but would rather have the softer suspension settings from “normal” mode.

Once you configure a profile, it’s easily saved with just the press of a button. The Camaro and Challenger also offer driving modes, and LCD screens in their gauge clusters, but the Mustang is first to go all-digital.

The digital gauges are an upgrade, for sure –but apart from fun animations, such as displaying the revs across the topmost part of the screen in the performance modes, we didn’t think Ford took advantage of the screen’s potential. While directions appeared during navigated routes, it would’ve been nice to have the option to switch to a map while a passenger fiddled with audio settings. Compare this to Audi’s virtual cockpit, which sets a high bar for all digital control panel capability. It may seem unusual to compare any aspect of this car to an Audi, but its unavoidable, as the German automaker’s tech shows how dynamic digital gauges can be.

“Track apps” return, and are again accessed through the instrument panel. The tire-smoking line lock, and rev-holding launch control, are now joined by a drag strip mode exclusive to those who opt for the 10-speed automatic. It’s similar to launch control in the manual car, but using the loaded autobox to deliver the optimal sprint off the line. Any mention of “drag strip” mode immediately draws comparisons to what the Dodge Challenger Demon wields, but the Mustang needs to double its horsepower before that’ll happen. We’ll revisit that when the new 1,000-hp Shelby becomes available.

Beyond that, the cockpit remains similar to last year. Large, chunky paneling makes up the dashboard, airplane-like switches control driving modes, and the seats in the back are only for the desperate.

The 2015 Mustang finally moved from a live rear axle to a far more modern independent rear suspension setup. It addressed both appeal to a European market, which demands agility, and the fact that the Chevrolet Camaro had this from the start of its reintroduction.

The new suspension helps, but does not a sports car make. Pulling through windy Malibu canyon roads put the Mustang’s footwork to the test, and there’s certainly a level of confidence that wasn’t there before the 2014 refresh. Yet a certain weight is still present, particularly in the V8 Mustang. It’s still a muscle car. It may have learned to two-step, but it’s not going to be a stunner on the dance floor.

It’s still a muscle car. It may have learned to two-step, but it’s not going to be a stunner on the dance floor.

What makes for palpable improvement, though, is the new “Magneride” active suspension system.. Dampers filled with metallic filings firm up based on inputs from multiple sensors monitoring conditions. They’ll adjust a few thousand times per second to balance out the load of the car, reducing body roll in turns, or nose dipping during hard braking.

Less distinct is the 5.0-liter V8’s 30 hp increase, to bring the output to 460 horses. The bump gets lost in the already huge amount of power available, but the increase in the rev limit was more tangible. It’s handy to have so much room to play within a gear — and let’s not forget the amazing exhaust note being allowed to ring the canyon walls like a boss.

The six-speed manual gearbox is made up of new hardware designed to handle increased torque capacity, thanks to a new twin-disc clutch. Work has also been done to reduce shift effort. In practice, it’s smoother than its previous iteration, but the manual transmission in the current Camaro feels more effortless and forgiving.

We were admittedly a little nervous when approaching the ten-speed, given that 10-speeds in other performance cars failed to impress. In the Lexus LC 500, for example, the multitude of gears meant the car was almost unsure of which to use, jumping in and out of them trying to decide.

When put to the switchbacks we drove the Mustang on during our brief stint, we had no such qualms. The pony car swapped gears smoothly, and we never felt a level uncertain of its next move. The car allowed us to stay in gears for as long as we needed before deciding to shift out, and it gave us the confidence to worry less about the gearbox, and focus more on the road ahead. More might not necessarily be better in this case — but for the record, the automatics on the Camaro and Challenger only go up to eight gears.

If you’re thinking fuel economy’s the selling point for the 10-speed automatic, you should know it only nets you a single mile on top of the manual, which gets 18 mpg combined. Ford’s says the fuel economy has been the same for years, but the power has increased. Take that as you will.

Go for the premium trim, though, and that bumps it up to a baseline of $39,095. There are loads of customization options for wheels, paints, and seats on offer, and performance packages with the Magneride damping system add up quick. All told, our tester, equipped with the six-speed manual, came out to $48,265.

Brand loyalty plays a huge part for fans choosing between muscle cars. Still, we think if you were given the keys to a Mustang for the weekend and directed to some thoroughly twisty roads, you wouldn’t be able to contain your excitement. The 2018 model is fast, reasonably balanced, and has a futuristic cockpit that edges out its peers.

The 2018 Mustang rolls into dealers this fall.

Nissan wants the 2023 Ariya to be its comeback EV, but the bar has been raised
We need more 7-passenger EVs, but the 2023 Mercedes EQS SUV has room to improve
Lux and refreshingly livable, Mercedes’ EQE moves EVs mainstream
2024 Chevrolet Equinox EV aims for affordability with $30,000 base price
Uber says it’s investigating ‘cybersecurity incident’
Nvidia’s Drive Concierge will fill your car with screens
The Uber hack is an outrageous tale of a teen hacking for fun
Tesla to fix window software on 1M of its U.S. cars
How to watch Tesla’s AI Day tonight and what to expect
2023 Audi Q4 E-Tron first drive: the predictable and traditional EV SUV we need
Tesla AI Day 2022: Optimus, self driving cars, and everything else announced
Tesla hopes full self-driving beta will be out globally by the end of 2022
Elon Musk reveals first delivery date and customer for Tesla Semi truck