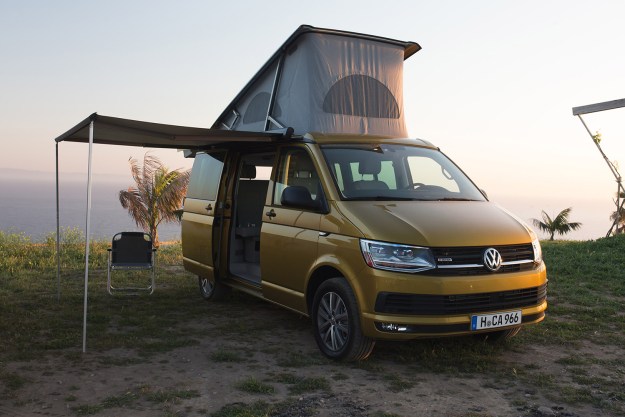 “The Volkswagen T6 California Transporter is what camper van dreams are made of.”

The van is not dead yet. You wouldn’t be able to tell in the United States, where the market continues to flood with crossover SUVs and trucks thanks to cheap gas. For Europeans however, the van is as much a part of their culture as gas-guzzling SUVs and trucks are to ours. And after spending a weekend camping out in the latest and greatest version of Volkswagen’s legendary T6 Transporter van, I’ve never wanted a van so badly in my life.

Volkswagen’s van tradition dates back almost 70 years to the original “Type 2,” VW’s first-ever Transporter model, also known as the “Kombi,” “Microbus,” or just, the “bus.” When introduced in 1950, American motorists judged vehicles more by the weight of their chrome than their utility, so it wasn’t until the 1960s that the Type 2 really caught on in American culture. It became a symbol for the single largest contemporary countercultural phenomena in history: the hippie movement.

“I’ve never wanted a van so badly in my life.”

In 1988, the company introduced a specific “California” model, bundling its most beloved amenities in a package aimed at camper van lovers. To celebrate its 30th anniversary, VW invited a bunch of journalists to live out (glamp out?) the Volkswagen van life in some of SoCal’s most iconic areas.

Unfortunately, you can’t get one. But, if you had to ask, your most basic Transporter “California” starts at around $51,000 with current exchange rates between the Euro. All of the examples used for testing however encroach $80,000, fully loaded with the current conversions.

Volkswagen continued selling the Transporter up through its fourth-generation (T4) model of the mid 1990s, which we got as the Eurovan. Sadly, VW ceased sales in the U.S. once it was replaced by the T5, after losing significant market share to the equally as iconic, more affordable, more powerful, and better to drive, Dodge Caravan in the 1980s.

“The California, is a straight-up camper van with everything you can imagine, including the kitchen sink.”

The two have since parted ways as direct competitors, with Chrysler’s minivans evolving more into a family vehicle, while the California continues house duty as a dedicated camper van with everything you can imagine, including the kitchen sink. There’s a refrigerator and freezer, an integrated water and micro-waste system for said kitchen sink, a gas-burning stovetop, and enough storage to literally live out of the thing.

The iconic “pop-top” where two adults can sleep lives on in more modern form: It’s now powered and controlled by a rotary-knob mounted where you’d normally find sunroof controls. A nearby LCD manages the on-board heater (fueled by the main tank), and displays the status of the massive onboard battery, water system, and sewage.

The interior is so incredibly well thought out, it gets me all giddy as a modern-day example of the renowned German attention to detail. Not an inch of space is wasted. Both front seats pivot to face the interior, so anyone can sit around the integrated mini-table that slides out from behind the main rear bench. Said bench folds flat to sleep two more people, technically making room for up to four adults inside this thing – though it might get a little warm and cozy.

Having spent two nights sleeping under the stars in the T6 California, it was comfortable enough to give me one of the most memorably peaceful sleeps that I could recall.

So why do they call it the “California,” and not the “super-duper-awesome camper van?” Well, as much as the Europeans love to criticize us Yanks, they absolutely love the idea of driving up the Pacific Coast Highway in California for its perfect coastal camping weather. This van specifically pays tribute to that stereotypical experience. From LA, we set off to our first stop, an off-the-radar special camping site on a beachside mountain in Santa Barbara.

Now, imagine driving a Volkswagen Jetta – except taller … much taller, and a tad narrower. That pretty much sums up what the California feels like behind the wheel, in that it’s the best camper van I’ve ever driven. It will remind you every once in a while, that it is a vehicle with a high center of gravity. But its body motions are incredibly well managed for something riding so high, as you’d expect from a modern German automobile. And it’s also incredibly easy, even fun to drive, thanks to its quick steering, adaptive suspension with three modes, and car-like power- and drivetrain.

It comes with a choice of gasoline and diesel turbocharged four-cylinders, but ours came with one of the more powerful gas options. Since it’s a familiar engine in VW-land, it produces the same 200 or so horsepower, mated to a seven-speed DSG dual-clutch automatic, and 4MOTION all-wheel drive. Zipping up the PCH to the first campsite, and through the succeeding twisty roads of Los Padres National Forest, proved just absolutely sensational. For a unibody camper van, that is, with fully independent suspension.

With excellent outward visibility – as long as you don’t forget to retract all of the integrated window shades – and the usual suite of passive and active safety tech, like blind-spot warning, pre-collision sensing with automatic braking, a rear-facing camera, and radar-guided cruise control. Remember, it comes with everything and literally, the kitchen sink. That pretty much makes it the closest thing to being the Audi of camper vans.

Why can’t we get these things?!

As our three-day camping excursion had its last night at a camp site in Bitter Creek National Wildlife Refuge, just southeast of Carizzo Plain, I was overwhelmed with a bit of sorrow. Even though Volkswagen acquired special permission to import these T6 Transporter Californias to the states for a media exercise, it’s sad to actually learn about what we’re really missing with the T6 being forbidden fruit to us.

“It’s sad to actually learn about what we’re really missing with the T6 being forbidden fruit to us.”

Prior to arriving in California for the trip, I, like many of the curious onlookers I encountered whenever I parked the California, wondered why Volkswagen stopped selling the Transporter.

Quite simply, the Transporter has become too expensive for the tastes of American buyers. Who would buy a $50,000 Volkswagen, let alone one close to six figures? High-dollar Vee-Dubs, like the Phaeton and even the unique, eight-cylinder gas “W8” Passat from the early 2000s, were never very successful sellers. Volkswagen told us that if the company were to offer the T6 California for sale here in the United States, the ones tested on this trip would have to cost around $110,000 for them to be economically feasible for import.

But unlike the Phaeton or the W8 Passat, the Transporter is universally recognized, and if our parking lot encounters are any indication, highly sought after. You don’t have to know about cars to know Volkswagen’s camper van is an archetype. Living out of a one is about as iconic as cruising LA in a droptop Mustang. It is the epitome of a carefree experience that will never go out of style. It’s what camper van dreams are made of.

If you’re lucky enough to be in a market where they’re available to you and want the camper van of many outdoor enthusiasts’ dreams, it doesn’t get any better with the T6 California.

2023 Kia Niro EV first drive review: Practical doesn’t have to bore you to tears
Nissan wants the 2023 Ariya to be its comeback EV, but the bar has been raised
Elon Musk reveals first delivery date and customer for Tesla Semi truck
We need more 7-passenger EVs, but the 2023 Mercedes EQS SUV has room to improve
Uber says it’s investigating ‘cybersecurity incident’
Nvidia’s Drive Concierge will fill your car with screens
The Uber hack is an outrageous tale of a teen hacking for fun
Tesla to fix window software on 1M of its U.S. cars
Lux and refreshingly livable, Mercedes’ EQE moves EVs mainstream
How to watch Tesla’s AI Day tonight and what to expect
2023 Audi Q4 E-Tron first drive: the predictable and traditional EV SUV we need
Tesla AI Day 2022: Optimus, self driving cars, and everything else announced
Tesla hopes full self-driving beta will be out globally by the end of 2022