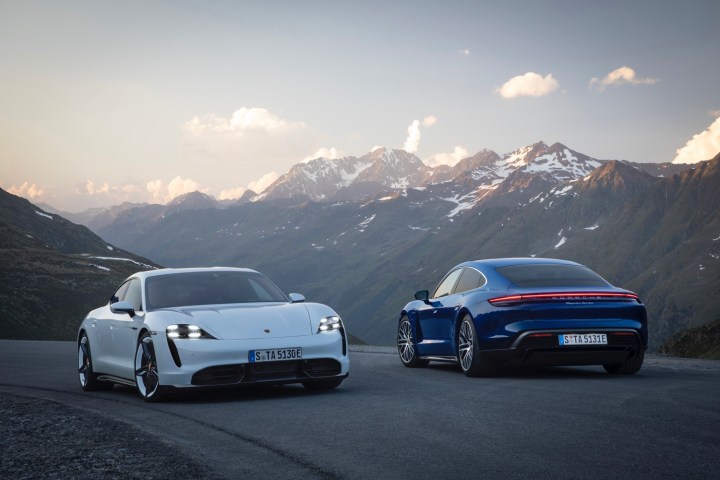 The Porsche Taycan, the German automaker’s first production electric car, is finally here, but that’s not the end of the story. Porsche only showed the Turbo and Turbo S variants, while confirming that there are more on the way. From the 911 to the Cayenne, Porsche has a knack for developing seemingly endless variations of a handful of vehicles. So what does Porsche have in store for the Taycan?

The best analog for the Taycan’s family tree will be the Panamera, reports Autoblog, citing a conversation with a Porsche representative at the Taycan (pronounced “tie-con”) reveal event. The Taycan lineup won’t be an exact mirror of the Panamera — there is no need for a Taycan E-Hybrid, for example — but it may get many of the same variants as Porsche’s other four-door, according to Autoblog.

In a press release detailing the Taycan, Porsche said it would introduce “less-powerful variants” over the coming months, while retaining the all-wheel drive of the Turbo and Turbo S. So a Taycan 4 or Taycan 4S makes sense. It’s also possible that Porsche will add a Taycan GTS as a mid-level model. Porsche has offered a GTS variant of every model in its current lineup at one point or another. It doesn’t currently have GTS versions of the Cayenne or Macan, but it has offered them in the past and may do so again in the future.

In 2017, Automobile reported that the Taycan would be sold in three strengths: 400 horsepower, 536 hp, and 670 hp. That report didn’t predict the 750-hp Turbo S, but it did get the 670-hp output of the Taycan Turbo right. The report also said Porsche might consider a rear-wheel drive Taycan, but the automaker hasn’t dropped any hints about that yet.

The less-powerful Taycan variants should also be less expensive than the Turbo and Turbo S, but how much less remains to be seen. There is a $65,800 spread between a base Panamera and a Panamera Turbo (the most expensive non-hybrid model), which should equate to a price of around $90,000 for a base Taycan, noted Autoblog. But Porsche North American CEO Klaus Zellmer also told the website that the Taycan platform was very expensive to develop, indicating it may only be used for high-end models.

So far we’ve only discussed the Taycan four-door sedan, but there is another body style in the works. Porsche confirmed that it will launch a production version of the Cross Turismo wagon concept at the end of 2020. Porsche already offers a Sport Turismo wagon version of the Panamera but, if it holds true to the original concept car, the Taycan Cross Turismo will feature more rugged styling in the vein of a Subaru Outback or Audi Allroad. That could help generate more sales in the United States, where the Panamera Sport Turismo is a niche model due to buyers’ disinterest in wagons.