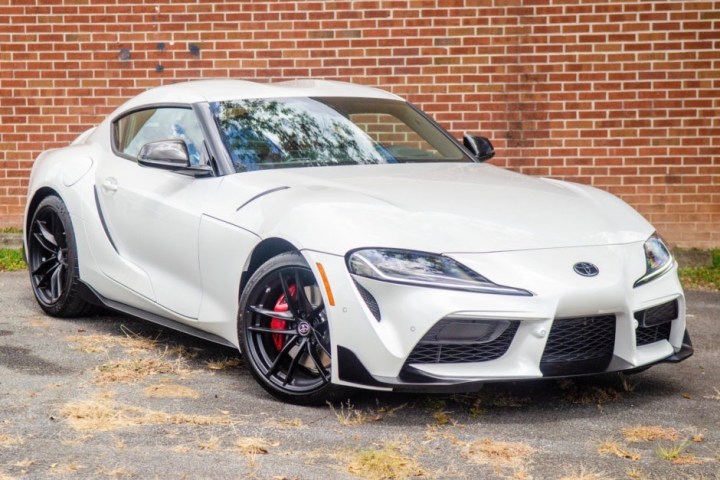 The 2020 Toyota GR Supra is one of the most anticipated new cars of the year, which inevitably has some people seeing dollar signs. One of the sports cars has already shown up on the popular auction site Bring a Trailer. It’s a brand-new car with just 23 miles on the odometer, according to the ad. It was originally sold through West Herr Toyota in Orchard Park, New York, but the current seller is located in Georgia, and is offering the Supra with a Georgia title.

The car in question is number 996 of 1,500 Launch Edition models sold in the United States, according to the ad. These cars feature extras like model-specific 19-inch wheels, carbon fiber trim, and a plaque with the serial number. This particular Supra also has carbon fiber mirror caps and the optional Driver Assist Package, which adds adaptive cruise control, blind-spot monitoring, rear cross-traffic alert, and parking sensors, according to the ad.

At press time, the top bid for the Supra was $50,550, with five days left in the auction. That means bidding hasn’t even matched the car’s sticker price yet. The Launch Edition has a base price of $56,180, before any options are added. Bring a Trailer, which caters to car enthusiasts, has a reputation for inflating the prices of typically affordable cars, but so far bidding on this Supra hasn’t gotten out of control.

Not that buyers haven’t shown a willingness to pay outrageous sums to get a 2020 Supra. The first one sold for $2.1 million at auction earlier this year. That car was unique, with flat gray paint, red mirror caps, and black wheels. Toyota CEO Akio Toyoda also signed the engine bay, and threw in the racing suit, helmet, shoes, and driving gloves he wore while personally testing the Supra. Proceeds from the sale were donated to the American Heart Association and the Bob Woodruff Foundation, which helps injured veterans and their families.

Regardless of provenance, every Supra is made from the same ingredients. The basic platform is shared with the BMW Z4, as is the turbocharged inline-six engine. The straight-six produces 335 horsepower and 365 pound-feet of torque, which is sent to the rear wheels through an eight-speed automatic transmission. While some corners of the internet have derided the 2020 Supra as nothing more than a rebadged Z4, we found that BMW DNA to be beneficial during our recent first drive.