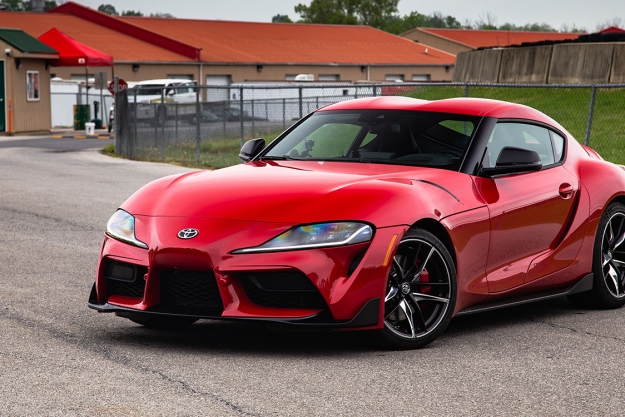 When the Toyota Supra stopped selling stateside after the Mark IV generation in 1998, its top-spec Turbo variant had an MSRP of $40,508. Amid a dying sports car market, it cost way more than most were willing to pay for it. At the time, buyers could opt for the much hotter BMW E36 M3 for nearly the same price. And stiff competition from the Porsche Boxster that was just hitting showrooms made the Supra an even a tougher sell. So, Toyota inevitably pulled the plug.

It wasn’t until a few years later that the Mark IV Supra became the star car in the first installment of the largest automotive movie franchise in all of Hollywood history: The Fast and the Furious. That put it back into the limelight, putting it up on a huge pedestal. Since then, fans around the globe have clamored for its revival.

The Supra is about as unique as a modern, Japanese sports car can get.

After gauging the market and wetting the appetites of car enthusiasts, tuners, and racing fans alike with the FT-1 Concept in 2014, Toyota had enough solid demand to justify the model’s return. Following what seemed like an eternity, Toyota finally obliged by teaming up with BMW to bring back its most revered nameplate. And we were among the first group of people to give it a go at and around Summit Point Raceway in West Virginia.

Building off the positive feedback from the FT-1 Concept, Toyota designers kept that design intact, transposing a lot of the cues into the production Supra. For instance, the “double bubble” roof is a homage to Toyota’s premiere sports car from the 1960s, the 2000 GT. And the upswept trunk line not only doubles as an integrated trunk spoiler, it pays tribute to the Mark IV Supra’s original rounded and raised trunk design.

Due to packaging restraints from the platform – which is shared with the BMW Z4 – the production model is relatively smaller in overall size than the FT-1. But that doesn’t detract from its uniqueness. The Supra is about as unique as a modern, Japanese sports car can get. Love it or hate it, it’s a refreshing sight in a sea dominated by vanilla cookie-cutter sedans and crossover SUVs.

None of the Supra’s exterior appointments are frivolous or out of excess; it’s all form following function here. The fender and hood vents might be blocked off with plastic filler pieces, but those fillers only exist to optimize aerodynamic and cooling efficiency for street performance use. Otherwise, they’re all removable should aftermarket tuners want to improve cooling by increasing airflow.

Similarly, the interior is a no-frills affair. Toyota engineers made sure their interior looked vastly different from its platform-mate, the Z4. It’s simple and purposefully laid out with minimal distraction, all so the driver can focus on what matters most: the act of driving. And there’s real carbon fiber trimming the center console and doors, further proving the Supra means business. As a strict two-seater, the cabin is intimate and cocooning with just enough space for two full-sized adults up front and their things in the trunk.

Though it’s hard to ignore that the Supra’s infotainment system is a rehash of BMW’s latest iDrive setup, which in base form comes with a 6.5-inch screen while the upgraded version resizes that to 8.8 inches.  The dual-zone climate and radio controls appear to be lifted straight from an F30 3-Series. The reason for this, according to Supra’s chief engineer Tatsuya Tada, is because BMW’s switchgear is more sensible, logical, and functionally ergonomic. However, the Supra gets its own bespoke analog and digital gauge cluster with a center-mounted tachometer. Apparently BMW’s version of those was not logical enough for Mr. Tada.

Although cars these days come loaded with tech to bedazzle and wow the occupants with the latest and greatest, the Supra’s technology list remains rather minimal. That’s because most of the technology is behind the scenes and under the sheet metal, all in the name of performance.

Optional kit includes sat-nav with the larger screen, a heads-up display, wireless Apple CarPlay (a Toyota first), a wireless smartphone charging pad, and an uprated JBL audio system. There’s also an all-new Supra Connect app that you can download on your smartphone and receive various updates about your car’s status and functional health.

Previous generations of Supra were categorized as sports grand tourers, meaning they offered an equal balance of comfort and sporting driving characteristics. But this time around, Toyota morphed the Supra into a full-fledged sports coupe.

The biggest requirement for the Supra, besides the necessitation for front-engine with rear-wheel drive, is that it comes with a straight-six, a tradition since the beginning. And that’s another reason why Toyota decided to team up with BMW, according to Tada. BMW is simply the best at making straight-sixes.

As such, the 2020 GR Supra utilizes the same twin-turbocharged “B58B30” inline-six found in the BMW M340i and Z4 M40i. But it’s in a different state of tune, churning out 335 horsepower and 365 pound-feet of torque. Mated to the same ZF-sourced eight-speed automatic, 60mph happens in just 4.1 seconds.

And the results of that tuning are nothing short of staggering. The GR Supra is hands down, a bonafide sports coupe that prioritizes performance driving over anything else. Our first opportunity behind its helm was on the Shenandoah Circuit of Summit Point Raceway. With the Supra weighing in at just under 3,400 lbs, its perfect 50-50 weight distribution proved outstanding around the very windy 2.2-mile road course and through its 20 tight, undulating curves. With adaptive suspension and an active limited-slip differential, the GR Supra was incredibly composed, controllable, and extraordinarily forgiving at the handling limits, making sideways action so manageable that you could become a drift-king overnight. It is a proper sports coupe, through and through.

On the one-hour journey back to the hotel in Middelburg, VA, the Supra impressed even more with a very comforting ride, especially when considering how extremely well it handled the Shenandoah Circuit. Cars that usually handle as well as the GR Supra often break spines with the first road imperfection. This is not the case with the Supra, and there’s no sacrifice to body control either.

The EPA fuel economy ratings for the Supra are 24/31/26 mpg city/highway/combined. But the Supra engineers specifically said that this is the first Toyota ever to not have a fuel economy as a goal and priority. That should tell you everything you need to know.

Tetsuya Tada noted that with the launch of the Mark V Supra, the engineers had their sights clearly set on the car being a more affordable alternative to the Porsche Cayman. As far as mid-grade sports cars, the Porsche Cayman is the benchmark and the one to beat, and Mr Tada knows it. But with the Porsche starting at $56,900, it’s not only more expensive than the Supra but also only comes with a turbocharged flat-four engine.

All Supras benefit from Toyota’s 3-year/36,000-mile bumper-to-bumper warranty, while the powertrain gets 5-year/60,000-mile coverage. ToyotaCare, the manufacturers complimentary factory maintenance plan, is included with every new Supra for two years, or the first 25,000 miles, which ever comes first. That also comes with 24/7 road-side assistance.

We’d take the GR Supra in top-spec 3.0 Premium form, which adds the larger infotainment display with touchscreen capabilities, sat-nav, and the JBL audio system. We’d color the exterior in Downshift Blue, to match DT blue, while all Supras pretty much from with black leather. Base 3.0 GR Supras come with a mixture of leather and Alcantara.

The 2020 Toyota GR Supra isn’t here to dazzle and wow with self-driving technology or safety tech. It’s purely driver-focused. That should be no surprise since the GR Supra is essentially a BMW underneath. Toyota’s tuners were simply provided the components and left to tune them according to their own specifications and requirements.

Regardless, the Supra is designed to garner endless grins whether on twisty roads or at your local racetrack. In an era aimed at trying to eliminate the driver and achieve autonomous vehicles, it’s a perfect reminder of the joys of actually driving an extremely well-sorted machine.

Is that enough to satisfy Supra fans and purists? With so much BMW at play behind the scenes to make the Supra happen, that might be a turn-off for those expecting a Toyota thoroughbred. But as far as we can tell from the driver’s seat, the 2020 GR Supra is pure race horse.