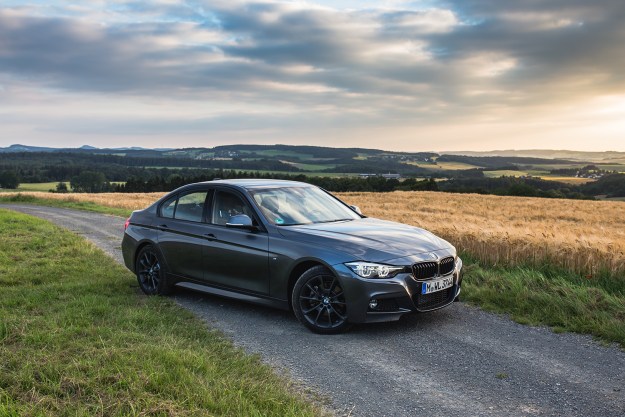 When the current BMW 3-Series launched back in 2012, it was a shocking disappointment. Soft, bloated, and too luxuriously void of any of the sports-car-like charm, the 3-Series felt like it lost all its mojo that made millions fall in love with Roundel’s entry-level sports sedan in the first place.

The BMW 3-Series has a legendary reputation for handling and performance. But taking that ultimate driving experience away from a BMW is like eliminating the warm weather from a summer vacation. What’s the point, then?

Other industry colleagues agreed as well. And thus, BMW listened and went straight to making the proper adjustments for the 3-Series’ midcycle refresh.

So excitement and curiosity levels peaked when BMW happily loaned me an updated, European-specification diesel-powered 320d complete with an epic and stealthy M Sport Package to test for Digital Trends. In what was to be a first-ever experience being in Germany for yours truly, our quest began to see how many awesome car-related things one could do with the 320d as our chariot. And to see how BMW’s revisions affected the updated 3-Series.

We toured southern Germany and even lapped the Nürburgring Nordschleife twice to give the current generation a good last lookover before its replacement arrives within a year.

Although we tested the European model, it’s sold in North America as the 328d. And it’s the only other diesel car available in its class next to the Jaguar XE 20d.

Germany might be known for its beer and bratwursts. But they’re also known for very stoic, minimalistic, and strictly functional interiors with minimal riff-raff. And the interior of this murdered out (black on black on black) 320d M Sport was dark as a schwarzbier.

The 3-Series’ insides are already a familiar experience having been around since 2012. So the differences between this European 320d and our American 328d mainly happen in equipment and packaging.

BMW’s navigation system with real-time traffic unsurprisingly adapted well to unpredictable slowdowns around its home turf. It successfully detoured me around a full-stop jam on the Autobahn in transit to the Nürburgring, and around a traffic-clogging marathon while trying to visit the Mercedes-Benz Museum in Stuttgart.

Our tester also interestingly lacked a glass moonroof. Whereas in America, a roof opening is often perceived as a standard feature in luxury cars. In minimalistic-minded Europe, it’s an optional extra.

We do miss out on a few options, one of which is BMW’s Selective Beam active LED headlight system, for now at least, until U.S. DOT headlight regulations get the update they sorely need. On a dark, B-road just south of Stuttgart on the way to the night’s hotel, it was dazzling to watch the automatic high-beams reposition its aim on-the-go to avoid blinding oncoming traffic or directly ahead.

To dock BMW another point, Apple CarPlay is still a $300 option with no Android Auto compatibility.

As stricter U.S. regulations on emissions have Europeans clamoring for the hills with their North American diesel offerings in wake of Volkswagen’s “Dieselgate” scandal, BMW remained steadfast and unaffected. And so, our 320d’s 2.0-liter turbocharged clean-diesel four-cylinder continues as an option for sedans in the U.S. under the 328d badge.

Modestly powered to the ideal top-of-the-line gas turbocharged inline-six in the 340i, the diesel four still delivers smooth and robust power not just around town, but on the Autobahn as well. On a quiet stretch in an unrestricted zone, the 320d’s 190 horsepower and lofty 295 pound-feet of torque managed to top the car out at 247 kp/h or roughly 153 mph with 60 only taking 7.3 seconds.

On the Nürburgring Nordschleife though, the lazy compression-ignition motor definitely left something to be desired. With its low redline, I found the diesel easily running out of steam once it surpassed the middle of the rev range, necessitating the need for early upshifts to get back into the engine’s torque band.

With significant suspension revisions from the 2015 update improving handling, the 320d proved a very satisfactory tool.

So if you’re a fan of BMW’s lively and high-revving engines, stick with the gas options. Otherwise for daily duties, the diesel is the choice to get for everyday driving, especially thanks to its incredible fuel economy and low-end torque. In Europe, the 320d is rated at a combined cycle at the equivalent of up to 49 mpg. In the U.S., the 328d is still impressively rated at 31 mpg city, 43 mpg highway.

What really did shine on the Euro-specification 320d M Sport however was its non-adaptive, sport-tuned suspension, steering, brakes, and epic Michelin Pilot Super Sport tires. The latter is the kind of sticky, high-performing rubber you find on some really fast Porsches. Thus, with significant suspension revisions from the 2015 update serving up better road feel, communication, balance and composure, the 320d proved a very satisfactory tool for my first-ever crack at lapping the world’s most difficult racetrack. If you want a car that can get you around every day and to an occasional track day and back, the BMW 3-Series is still one of the best ways to do so. The tires aren’t available as an option for U.S. cars from the factory. But you can purchase them from any third-party tire supplier, which we’d whole-heartedly recommend over the stock and sub-par run-flat tires.

It might not win the hearts of BMW enthusiasts as much as a clean E30 or E46 generation car. And the current model might be the weakest generation of all six. But the midcycle refresh brings the company’s icon back in line with once again to deliver the Munich’s beloved ultimate driving experience.

BMW supports the 2018 328d with a four-year, 50,000-mile bumper-to-bumper warranty, including the engine and transmission. BMWs are also known for reliability and having a long-lasting life if cared for and serviced punctually. For 2018, BMW ranked above average in J.D. Power’s annual Initial Quality Study. If you plan on keeping the car on the long-term or plan to cover distances equal to the moon and back, we recommend looking into a factory backed extended warranty from BMW directly.

We’d recommend the M-Sport trim package right from the get-go. Even with the stiffer suspension, it still represents the best blend between performance and comfort, offsetting softness of the non-sport 3-Series models. To which we say, if you want comfort, consider the Mercedes-Benz C-Class. But if cost were no object considering the 3-Series in general, we’d opt for the 340i with its superb turbocharged gas inline-six, which can be mated to a six-speed manual and is only a tick over $2,000 more expensive than our equivalently equipped 328d M Sport.

We’d also continue without choosing one of BMW’s option tiers (Premium or Executive) to individually select specific options according to needs. Park Distance Control and Active Blind Spot Detection, however, are welcome assistants that we’d recommend for safety; the Harmon Kardon premium audio since we’re also audiophiles; and we’d bite that $300 bullet for Apple CarPlay.

Munich. Salzburg, Austria. Stuttgart. The Nürburgring Nordschleife. Friedrichshafen. These are all the places we reached in our 320d. With every kilometer that ticked over, BMW proved they still can make the ultimate driving machine. It simply remains as one of the best cars you can buy in its class. With ever so stiffer competition however, BMW will have to work extra hard to make the next 3-Series really stand out.

In the highly competitive compact luxury sedan market, the BMW 3-Series is one of the oldest models and is due for a next-generation replacement. That’s just around the corner within the next year. Competing with the likes of the Audi A4, Mercedes-Benz C-Class, Infiniti Q60, Lexus IS, Jaguar XE, Cadillac ATS, and newcomers such as the Alfa Romeo Giulia, the Kia Stinger, and Genesis G70, BMW’s facing stiffer competition than ever before. But for those who truly love BMW’s ability to win over driving enthusiasts, it remains to hold its ground incredibly well.

The BMW 3-Series is known to meet and surpass the average “three-year lease crowd’s” expectations and then beyond if the vehicle is mechanically well cared for. At the rate of technological advancements and changes in the automotive industry however, the 3-Series might begin to feel even more obsolete as the current car ages past its seven-year life cycle. It should still be able to support the latest connectivity with smartphones. But with an all-new 3-Series just around the corner, you’ll want to sit tight for the latest and greatest.

As newer competitors load their cars up with lots of technology, the BMW’s 3-Series starts to feel refreshingly simple and driver-focused as it ages gracefully. The BMW 3-Series remains a top pick as a driver’s compact luxury sports sedan with hints of some of latest technology offered and worthy of our Recommended Choice selection.

Be weary of the Alfa Romeo Giulia however as it takes the award as the best looking and current best driver’s car in that segment. But unlike the BMW, it sadly doesn’t an offer a six-cylinder or manual transmission option. The Jaguar XE also offers very driver-focused handling dynamics while being wrapped up in a cozy British outfit. And the incredible Kia Stinger prices itself next to the 3-Series when you option it out. It is however, a considerably larger vehicle.

If having the latest gizmos and more comfort are your priorities, you’ll probably want to look at the Mercedes-Benz C-Class, Infiniti Q60, and the Audi A4.