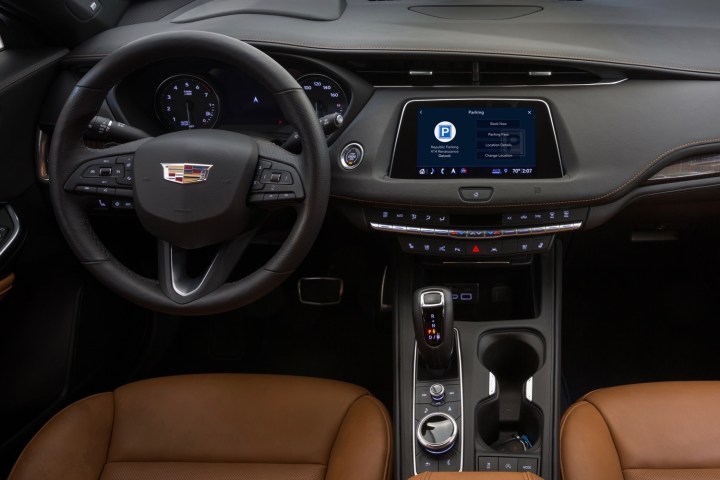 Driving can be fun, but parking usually isn’t. Finding a parking space in crowded urban areas can be difficult. Heading straight to a parking garage can help avoid that, but it’s hard to know how much it will cost in advance. Cadillac and ParkWhiz hope to streamline things with a new feature that allows drivers to find and pay for parking from their dashboards — well before they arrive at their destinations.

The new feature is part of General Motors Marketplace, the in-dashboard ecommerce platform that already allows you to order pizza from a Chevrolet or make Yelp reservations from a Buick. The new parking feature allows drivers to sync Marketplace with a ParkWhiz account, giving them access to thousands of spaces in more than 250 United States cities, according to Cadillac.

Drivers need to create a ParkWhiz account either online or through the ParkWhiz mobile app. That means setting up a payment method, and confirming vehicle details like the model and license plate number. Once that’s set up, drivers can locate available spaces using their vehicles’ dashboard touchscreens, reserve a spot near their destination, and pay for it.

General Motors launched Marketplace in 2017 across all four of its U.S. brands — Cadillac, GMC, Buick, and Chevrolet. It’s compatible on most GM vehicles beginning with the 2017 model year. Cadillac claims to have nearly 325,000 Marketplace-compatible vehicles on the road.

GM has hailed Marketplace as a breakthrough in convenience, but it also shows how the largest U.S. automaker is trying find new sources of revenue beyond car sales. Marketplace allows GM — and partner companies like ParkWhiz, Domino’s, Yelp, and Shell — to monetize the time people spend in their cars. It also lets GM tap into the transactions its customers may be making using smartphones. In-car ecommerce platforms could also become big business if self-driving cars take off. Autonomous driving will turn every vehicle occupant into part of a massive captive audience for marketers.

Whether its GM Marketplace, Audi’s traffic-light information system, or Nissan’s experimental “invisible-to-visible” tech, connectivity is becoming more of a priority for automakers. But like any technology, the way it is used will determine whether it is ultimately beneficial to people.

Topics
2023 Kia Niro EV first drive review: Practical doesn’t have to bore you to tears
We need more 7-passenger EVs, but the 2023 Mercedes EQS SUV has room to improve
Lux and refreshingly livable, Mercedes’ EQE moves EVs mainstream
Tesla to fix window software on 1M of its U.S. cars
The Uber hack is an outrageous tale of a teen hacking for fun
How to watch Tesla’s AI Day tonight and what to expect
2023 Audi Q4 E-Tron first drive: the predictable and traditional EV SUV we need
Tesla AI Day 2022: Optimus, self driving cars, and everything else announced
Tesla hopes full self-driving beta will be out globally by the end of 2022
Elon Musk reveals first delivery date and customer for Tesla Semi truck
Nissan wants the 2023 Ariya to be its comeback EV, but the bar has been raised
Make your car smarter with an Echo Auto — just $15 today
Sporty Polestar 3 SUV is an EV guiding star