A year after MyFord Touch launched last fall, Ford has announced that it is rolling out a major upgrade to the in-vehicle information system. MyFord Touch is a touchscreen system that debuted on the Ford Edge, and quickly appeared as a standard feature on other higher-end models (like the Explorer and Focus) as well as select Lincoln models under the name MyLincoln Touch. Built on the Microsoft Sync technology Ford has been offering for four years, MyFord Touch replaces many traditional dashboard controls like climate control with a touchscreen interface, and includes support for phone charging and syncing, satellite navigation, and voice recognition for hands-free use. Basically, MyFord Touch was supposed to interface with drivers’ phones and digital gear and make ever-lengthening commutes more bearable — including doing things like integrating with Pandora streaming music via Sync.

The problem with MyFord Touch was, in essence, that many customers hate it. No sooner had the technology started to roll out to consumers than dealers and Ford itself were swamped with complaints: The system was too complex, it would freeze or shut down randomly, it took forever to restart, the touchscreens were difficult to use and loaded with too-small controls, and — of course — between road noise, music, and other sounds — the voice recognition was spotty. Ford has rolled out no fewer than four software updates for MyFord Touch, and even paid dealers to hold clinics for vehicle owners to teach them how to use the system. But customers are understandably annoyed by, say, having to wait for MyFord Touch to reboot in order to turn on the defroster or change the volume on their music — all while driving.

The latest upgrade takes things a step further, offering a substantial revision to the MyFord Touch interface to make the system friendlier for touchscreen use, more responsive, and more stable overall. The new version will ship as the default on Ford’s 2013 Taurus, Escape, and Flex models, which should be landing in vehicle showrooms in early 2012. (They’ll also be getting some knobs back, so users won’t have to deal with touchscreens for some common functions.) And, in a move that seems unprecedented in the industry, Ford plans to send USB flash drives to the owners of quarter million existing MyFord Touch-equipped vehicles in the United States so they can upgrade their MyFord Touch systems to the new software. Ford says the process should take about 45 minutes, and users will be able to have dealers do it for them if they like. (The company hasn’t yet announced upgrade plans for the 200,000 or so MyFord Touch-equipped models that have been sold internationally.)

Interestingly, Ford is not upgrading the actual hardware behind the MyFord Touch system: It’ll still have an 8-inch touchscreen, sport 2GB of flash storage, and be powered by a 400MHz Freescale ARM 11 processor with 256MB of RAM with a separate head unit for handling audio. In other words, it sports considerably less storage and processing power than a low-end smartphone.

Peddling hardware in a software world

Ford has always planned to offer a continuing series of upgrades to its MyFord Touch software, and maintains that while the new interface (with larger controls and less-dense screens) is a major revision, the new version is not a desperation move. Nonetheless, Ford is looking to move quickly to resolve MyFordTouch issues: This year’s J.D. Power’s Initial Quality rankings this year saw Ford drop from fifth place all the way down to 23rd. Lincoln didn’t fare much better, dropping from eighth place down to 17th. Much of the blame for those ranking declines was placed on Sync and MyFord Touch. Consumer Reports also dropped Ford from 10th to 20th place this year—again, Sync and MyFord Touch was a significant factor. 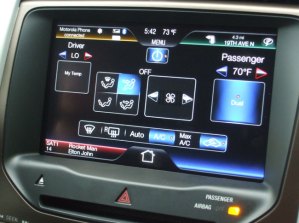 The challenge facing Ford — and other companies offering sophisticated in-vehicle systems — is that consumers aren’t accustomed to upgrading their cars. Users of computers and smartphones have probably never known a device that didn’t have a relatively short lifetime, punctuated by a series of do-it-or-lose-it upgrades. Those could come as new versions of individual applications, components, or entire operating systems. Most consumers’ expectations of vehicle maintenance are a stark contrast. They buy gas, try to remember to go in for oil changes and regular maintenance, and sometimes even manage to get the vehicle cleaned. And, for many consumers, cars last far longer than phones or computers. Most people don’t upgrade cars any quicker than they upgrade couches.

Part of Ford’s strategy with sending out the upgrade on USB sticks is simple: Nudge existing customers into downloading new versions of the software from Ford when they’re released, then installing the upgrades themselves in their own vehicles. When the customers get their USB sticks for upgrades, they’ll have one less excuse for not upgrading.

And customers will have to upgrade. Although it’s tempting to blame Ford’s software designers for all the problems customers have been experiencing with MyFord Touch, many things are outside Ford’s control. If a new smartphone comes on the market that can’t interface with MyFord Touch, it may be a bug with the phone rather than a problem on Ford’s side — although Ford is likely to get the blame. Similarly, an upgrade to iOS or Android could easily introduce new problems that are beyond Ford’s control. At that point, Ford’s options are either to hope the vendor fixes the problem, or come up with a workaround itself…which, in turn, forces customers to upgrade.

It’s not about the engine anymore

It takes years to move a vehicle from design stages to a showroom, but software development cycles are usually measured in months. That makes it tempting to say that automakers should stay out of the software business altogether. Maybe they would be better off turning over the design and maintenance of in-vehicle systems to third parties and focus at what they’re good at: building cars.

The reality is not that simple, and part of the reason is car quality. The quality level of new vehicles is quite strong across all major automakers. A new car’s basic ability to get you from point A to B and overall reliability are generally far ahead of where manufacturers were even a decade ago — problems like Toyota’s massive recalls aside. That means amenities and high-tech options add-ons are increasingly the deciding factors in new vehicle purchase decisions. Sure, customers are still going to be all about heated seats and cargo space, but systems like rear-view cameras, self-parking, and — yes — systems like MyFord Touch will be the dealmaking items for many buyers. Even the trouble-prone MyFord Touch 1.0 has been a benefit for Ford: Sales of the new MyFord Touch-equipped Explorer have doubled over the sales of Ford’s previous Explorer model.

The result is that automakers can’t afford not to offer sophisticated in-vehicle systems to customers. Many customers will just take their money to another car maker if they don’t see gizmos they like.

The value of sophisticated in-car systems for drivers seems obvious. They will be able to plug their phones, tablets, and other devices directly into their cars to blend of mobile and in-vehicle technology. Music, photos, satellite navigation, voice commands, hands-free calling, charging, synchronization — what’s not to love?

The reality sets in later. For one thing, those first-time buyers are also committing to performing regular updates for their systems (four already for MyFord Touch, with a fifth on the way) in addition to regular vehicle maintenance. Sure, customers can get dealers to do it for them, but most consumers don’t actually enjoy taking their cars back to the dealer every few months. Most customers will decide they’re going to do the upgrades themselves. Which, in many cases, means they aren’t going to do it. Think of the millions of smartphone owners who never upgrade their phone operating systems because they don’t sync with a computer — perhaps because they don’t have a computer in the first place. Sure, some folks get over-the-air updates, but that’s not how most in-vehicle systems work. Even for the most tech-savvy customers, upgrading sophisticated in-vehicle systems always incurs a certain degree of hassle —and the more hassle, the less likely even gung-ho customers will be to keep up with software.

Now, imagine buying a used car. If a used vehicle has an in-vehicle information system, odds are that the vehicle’s new owner is going to have to jump through many hoops — and shell out a fair bit of money — to use it. In new vehicles, virtually all in-vehicle systems are activated, with fees for using the service rolled into the price of the system. (The $750 price for the most basic MyFord Touch as an option probably covers less than $100 in parts: The rest is installation, fees, and margin for Ford and dealers). After a free period — three years for MyFord Touch — users have to start paying subscription fees to keep their navigation and other services active. [Update: Ford says ongoing Sync services providing directions, traffic info, and information run “only” $60 a year after the initial free three years.] Used vehicle buyers will have to start paying a lot sooner — perhaps from day one — or they simply won’t be able to use the technology. For used car buyers, sophisticated in-vehicle systems have up-front costs and pain. Folks in the used car market are arguably better off with things like after-market navigation systems that they can upgrade or replace on their own schedule — or simply pick up and move to a new vehicle.

Rules of the road

For the last few decades, vehicles have become increasingly reliant on digital and microprocessor technology. Despite some headaches, in many cases this technology has added legitimate value to vehicles. Digital technology has cleared the way for everything from keyless entry and digital diagnostic systems to improvements in systems like antilock brakes, engine performance, and traction control. Overall, these technologies make vehicles safer and more reliable for everyday drivers.

However, the jury is still out on the value of in-vehicle information and entertainment services, particularly as they migrate from high-end luxury vehicles (where initial price and resale value aren’t always key factors) to mainstream cars. It’s already commonplace to see owners of used cars replacing factory-installed audio systems because security codes have been misplaced or lost by previous owners. A few years from now, it might be common to see dark, dead touchscreens in the middle of dashboards. Non-functional or unusable in-vehicle systems could detract from a value of a vehicle if — as in the case of MyFord Touch — they’re the only way to handle core functions like climate control or volume levels.