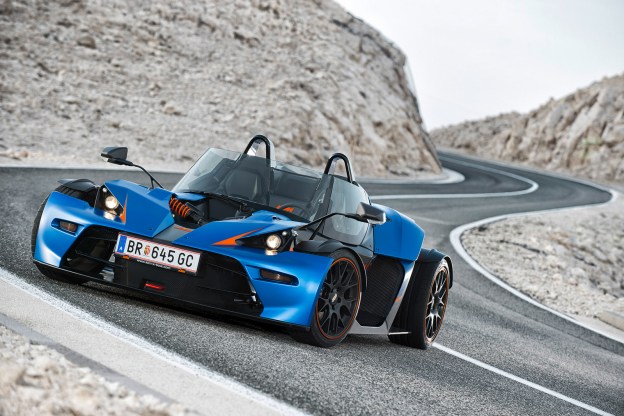 While we tend to prefer our cars with as many gizmos and gadgets as we can muster, there’s just something about those simple, track-ready machines we can’t help but love.

On the softer side of automotive purism, you have cars like the Lotus Elise, and on the wilder side, you’ll find monsters like the Ariel Atom.  One of our favorites, though, comes from KTM in the form of the X-Bow.  This year in Geneva, the X-Bow GT will show us a softer side of the brand.

Now, before you get too excited, realize that the X-Bow isn’t available in the U.S., so street legality isn’t a concern here – because it’s not.  That doesn’t change the fact that it’s one of the coolest looking performance machines we’ve ever seen.  The X-Bow is powered by VW Group’s 2.0-liter turbocharged four-cylinder engine, which can be found in just about everything the brand makes.  This particular version is tuned up to 285 horsepower, even stronger than the Golf R or Audi TT-S, giving this ultralight racer some major pep in its step.

The standard X-Bow doesn’t have a windshield, making it all but necessary to wear a helmet while you’re behind the wheel.  The GT improves on that model by offering a front windshield and glass on the sides, but we think these modifications come at the expense of the car’s design.

It might sound funny to say that we’re geeking out over a car who’s only luxury is a windshield. It’s a simple car with simple intentions, but we sort of see the X-Bow on the same level of collectivity as the Macintosh 128k.  But faster.  Oh yeah, much faster.  Check out our coverage next week to learn more about the KTM X-Bow GT from the Geneva Motor Show.