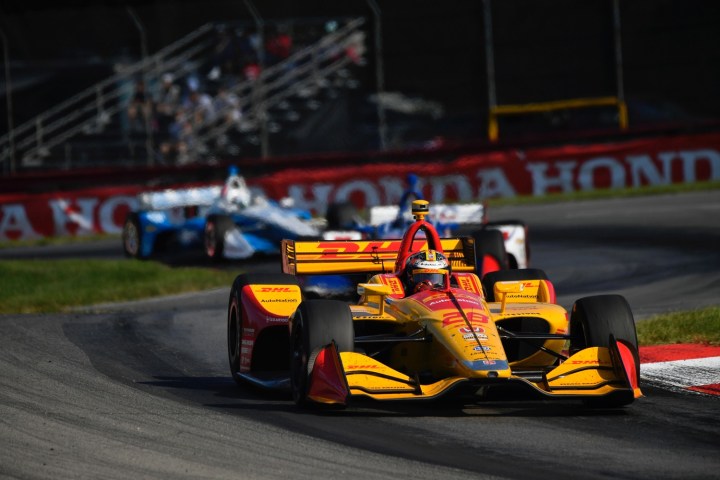 Another race series is trying to go green. IndyCar will add hybrid powertrains as part of a major overhaul of its engine designs for 2022. The series, which is built around the legendary Indianapolis 500 race, accelerated the rollout of its new engine rules so it could get hybrid powertrains on the grid more quickly.

The hybrid powertrains will produce more than 900 horsepower, according to IndyCar, although some of that power will only be available for brief periods as part of a “push to pass” system, designed to aid overtaking. The powertrains will be built around 2.4-liter turbocharged V6 engines (up from the current 2.2-liter displacement), producing 800 hp, according to Racer. Drivers will also be able to activate a temporary increase in turbo boost pressure, as well as electric assistance, which should be good for around 50 hp each, the magazine reported.

Chevrolet and Honda — the only two current IndyCar engine suppliers — have signed on to provide V6 engines under the new hybrid rules. In a statement, IndyCar said it’s also leaving the door open for another manufacturer to supply engines. The introduction of hybrid powertrains will coincide with the launch of a new race car chassis, so that different new technologies can be implemented as a package, according to IndyCar.

Hybrid powertrains will also eliminate the need for external engine starters. Drivers will be able to use the hybrid system’s electric motor to start their cars. IndyCar claims this will help improve the spectacle for fans, since drivers will be able to restart cars if they stall on track. That will mean fewer breaks in the action to recover stuck cars, according to IndyCar.

The IndyCar hybrid system is similar to the kinetic energy recovery system (KERS) first used by Formula One teams in 2009. F1 went full hybrid in 2014, mandating powertrains that make greater use of electric power. While they make similar power to the previous non-hybrid powertrains with greater fuel efficiency, the current F1 hybrid powertrains have been criticized for lack of noise, and for complex designs that keep the cost of racing high.

Just as automakers are embracing hybrid powertrains for their road cars, hybrids are becoming increasingly common in racing. Hybrids have made up the top class of cars at the 24 Hours of Le Mans for the past few years, although high costs eventually pushed all teams except Toyota out. Meanwhile, Formula E is steadily carving out a niche for its all-electric race cars, and plans to start an off-road race series for electric vehicles.